I recently found out that on May 9th, Friday the 13th turned 40. I could not let that pass without saying something. Read on for my memories of the thrills and chills of Kevin Bacon's butt, camp, and one helluva of mother.


Ever since Covid-19 changed life as we know it, I have been trying to create a decent schedule for myself. I am fortunate to be able to work during the week. The world is always going to need therapists and while I enjoy helping people navigate through their concerns and life stresses, I find myself really checking out when the weekend approaches. I become immersed in other worlds either through movies, video games, or my own imagination.

This past weekend my escapism was all about horror movies. A mega horror movie marathon that was much needed. I love horror movies, particularly slasher films. From the practical effects to the strong women who typically become the lone survivors, along with feeling scared/grossed out is always a fun thing. I enjoy watching horror alone, but watching with other people also has its charm.

The original Friday the 13th was a part of that marathon. As I was choosing it on one of the many streaming platforms out there, I noticed the date: 1980. This got my brain rattling off calculations. "We're in 2020. 1980 was 40 years ago. Holy moly that means Friday the 13th is 40 this year!" I then did some research and found that on May 9th the film marked its 40th Anniversary. I was shocked for so many reasons. Mainly because I am not that far from being 40 myself and I am trying to figure out how I feel about that, but that is all for another post!

Let's travel down a side story, shall we? My mom's younger sister (Auntie Marsha) was 18 when I was born. She has always been the hip cool aunt and when she'd babysit, I'd get to see all the fun stuff. She introduced me to MTV. Helped me become a UNO fanatic. She'd paint my fingernails with a hot pink highlighter and I instantly felt glamorous. She also loved horror so we'd watch the Twilight Zone and other scary movies and shows, but the one thing she loved was Halloween. She introduced me to that horror movie (which she probably should not have, but what can ya do?) and from that moment on I was fascinated with slasher movies.

I'd go to the mom and pop video rental store down the street called Midway Video. I'd peruse the horror section and just be captivated by the VHS covers. I wanted to watch them all. Thanks to older cousins, I'd somewhat get that chance. My cousin Ashley lived across the street for a brief moment in time and she'd let me know when a good horror movie was going to be on. I'd sneak over and watch, my parents having no clue. I'd usually be called home before the movie was finished, but the experience would always be so fun! I remember A Nightmare on Elm Street Part 4 was on and Ashley and I watched while rooting for our favorite teens and feeling devastated when they'd bite it.

With all this exposure to so many movies, there was one series in particular I was not getting enough screen time with: Friday the 13th. I'd catch a few moments from various sequels here and there, but I had not really sat through one. Out of the big three, Jason Voorhees was pretty frightening. Michael Myers always walked so slow and only really came out one night a year. Freddy Krueger was scary, but he went after people from a certain neighborhood that I thankfully did not live in. But Jason Voorhees! Well, sure he liked Crystal Lake, but he also knew how to navigate and stalk people through the woods. He could run, like a real run. His hockey mask freaked me out, probably on account that I was highly allergic to sports.

It should also be noted that I would occasionally rent the Friday the 13th Nintendo game. I'd play with a bucket of bubble gum next to me with my heart racing whenever Jason would show up. I was pretty much set up to be terrified. 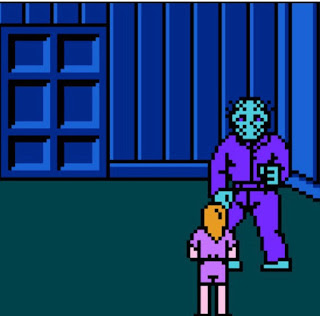 Either way, when I was in the 9th grade I finally had a chance to catch the original Friday the 13th. There was some marathon being aired on a cable station or something, I don't recall all the details. I was super excited though. I had a meal with me, it was McDonald's. A quarter-pounder with cheese and super sized fry and drink with a small cheeseburger as an appetizer. I had questions. Based on my viewing of Scream, I knew that Jason was not really in the first one, so I had no idea how this was all going to unfold. I was ready for it though, nothing would stop me! 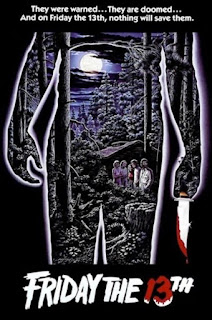 It was a delight watching Friday the 13th that night. Movies involving camp have always been fascinating to me. My family never sent us to camp or anything like that. We'd essentially just watch movies and eat Hot Pockets all summer. I am not even sure I would have wanted to go to camp, but seeing the idea and fantasy of camp in movies and TV shows always seemed interesting. I'd think, "If I were in camp, would there be a summer romance? Would I get a rash from poison oak? Would I miss home? What about the food?"

Ok, back to 9th grade. I was so surprised to see Kevin Bacon in the movie. A nice familiar handsome movie face. Plus he walked around in a Speedo and there was a sex scene where I saw his butt. I may have blushed. Or it may have been all the sodium from the fries. Side note, I am always intrigued by men's fashion in early '80s movies. The tiny shorts. Those bulges. The really long curly chest hair. It's an aesthetic rarely seen in movies since. Or maybe I have just been watching the wrong movies. 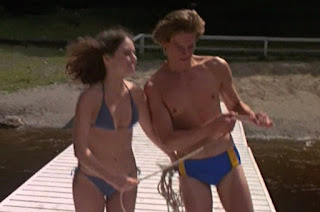 There was also the special effects. Tom Savini was a genius, I think we can all agree on that, but the scene with the arrow going through Jack's neck is still impressive all these years later. I am still dazzled by that, even if I was shocked that they killed Kevin Bacon! 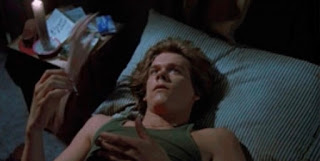 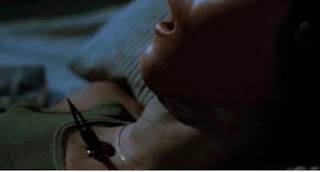 Other pieces of the movie that stuck with me that night was the music. I also loved the opening credits with the giant blocked letters of the title breaking through glass. The score along with the iconic "Ki, ki, ki; ma, ma, ma," really created some suspense. 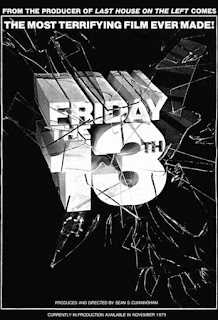 As the scene unfolded with Marcie heading to the restroom after her romp with Jack, my phone rang. It was one of my best girl friends, calling because she needed help with boy drama. This was in the old days when TV could not be paused. I was faced with the ultimate dilemma. Be a good friend or choose horror.

I chose to be a good friend. As a result I ended up missing a chunk of the movie, but upon my return I was at the main event. Adrienne King's Alice, face to face with a kindly looking older woman. For a moment I felt a sense of relief. This broad seemed nice and would surely help Alice. However, Betsy Palmer provided such a twisted crazed turn as Jason's maniacal mamma, and teen me was just riveted. That whole final act is a really long drawn out May/December fight scene. It was rare to see something like that. 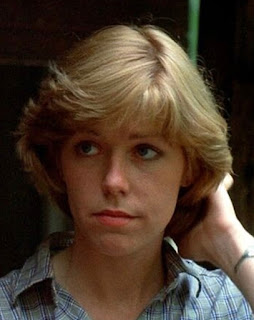 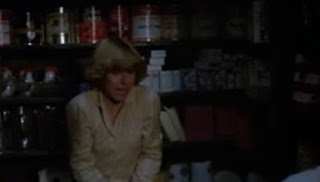 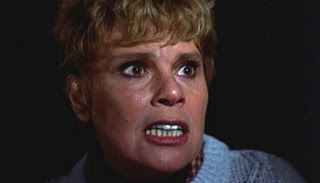 Mrs. Voorhees breaking into Jason's voice to kill Alice was a whole other level, I loved it. And then bam! Alice brings the ax to Mrs. Voorhees' neck and lops her head off. It was great. There was this drama to it all. Oh and another side note, Victor Miller who wrote the film, would also go on to write for soap operas, including my beloved All My Children and One Life to Live. It makes my heart proud this this horror movie has connections to two of my favorite soaps.

Now by this time I was still trying to figure out how Jason would eventually enter all this madness. That final shock scene with mutant Jason taking Alice into the water and her waking up in a hospital did little to answer my questions about Jason's future appearance in these films, but it certainly led me on an adventure to watching and enjoying the following sequels to fill in the blanks.

So that's mostly my impressions on when I first saw the original Friday the 13th. It was a memorable viewing experience for sure, even though I would need to watch it again to make up for the chunk I missed while I was being a good friend.

It's a really cool thing that this movie and its sequels have been around for decades. I'm happy to be a fan. What are your thoughts on the original Friday the 13th? Is it a classic that you enjoy viewing or are you just kinda meh about it? Let me know!

Email ThisBlogThis!Share to TwitterShare to FacebookShare to Pinterest
Labels: Friday the 13th, Horror