This week things have been right on Target. Check the link and find out what happens when you cross paths with me in a store.


I've been in a weird head space lately. I gravitate towards being incredibly happy to highly emotional. I was taking a shower the other night and just started sobbing like a lunatic. No idea why. No clue at all. I was a damn mess though. There's just been so much racing through my mind. For instance, when I was a little girl I wanted nothing more than to grow up and become a cheerleader followed by prom queen. This was before Disney unleashed an onslaught of princesses upon the world so prom queen was the closest thing to gowns and all that froo froo stuff. I also wanted to be a glamorous movie star, starring in my ultimate role as the damsel tied to the train tracks. I loved the pure drama. Plus I just had squirm and scream, seemed easy enough. It all felt perfect.

That was until I fake-tied myself one too many times to a tree one day and one of the neighborhood boys told me, "Michael, we're tired of always saving you, can't you just save yourself?" What a novel idea! So that's what I did. I decided I'd be my own She-Ra. My own Wonder Woman. I'd be invincible. Nothing would be able to stop me. Plus there'd be lots of gold shiny accessories to wear. I'd kick ass while looking functionally fabulous.

Life is funny. We can't be super heroes. We aren't invincible. There are no shiny golden accessories capable of deflecting bullets. Oh no, not at all. There is however a vast array of plastic artifacts and bubble gum. Just a few items that help make life easier. For me at least.

So with all of these different hats I've worn, I have come to realize that the role of fairy godmother might actually get to be played by me, and I kinda like it. Before we go any further, please be aware, I am not referring to the fairy godmother from the Disney animated Cinderella movie. I'm referring to more of a FGILF. Ya know, sculpted cheekbones. A healthy decolletage. A flesh colored mole placed seductively over my lip that I might color in every now and then for fun. That kind of fairy godmother. What in the hell am I talking about? What does this all mean? Keep reading! It will make sense!

I got off of work early today. It was nice. Life has been hectic as of late. I'm not complaining mind you, but the facts are facts. I'm constantly on the go so to be able to leave work a little early and complete some errands for the day was a dream come true.

After taking care of some basic errands (that may or may not have involved a quick stop to Toysrus) I made my way to Target for some grocery shopping. I've learned how to cook. My ex-husband is rolling over in his grave right now. If he had one. Ba-da-bum. No seriously, he'd be shocked as hell. I'm shocked as hell. I used to believe that an oven as storage space made total sense. Anyways, the thing I love about grocery shopping at Target is that they also have a toy aisle, and if there's anything I love more in this life it is of course a toy aisle.

While looking over the toys I was pleasantly surprised to find a Black Widow Titan Hero Series doll. I have been searching for one of those at a fevered pace during the past number of weeks. I love the color of plastic used for her hair. Something about it makes me smile.

They also had new Ghostbusters toys. I know this will upset some, but I am actually really excited for the new Ghostbusters movie. I also am thrilled for the new figures. Seeing the lime green Ghostbusters packaging in stores was just a blast. I get folks don't like it, hell, they even loathe it. That's fine. I grew up with Ghostbusters like most other people in my age bracket. I'm a fan. It's no She-Ra, but I like it. I enjoy it. It was an important part of my growing up. I don't feel like this reboot is slapping my childhood in the face. My goodness I wanted to be tied up on a railroad track as a kid. My 4 year old self is happy I have made it this far in life.

Since I was on such a toy high I decided to make my way to the cosmetics aisle. I had all my food and toys ready. (Some candy too.) I felt like I needed a new lip color. Something to spruce up my face for spring.

This is when I overheard a mother of five asking for help to a Target employee. She needed assistance with the foundations. The employee was this fun guy with a lilac swoop of hair who had no clue what kind of foundation to recommend. The desperate mother was lost with no clue what to do.

That's when I spoke up, "Ma'am, I'm by no means a make up artist, but I used to work at a cosmetics counter in a department store. I could help you out if you'd like?" She was so thrilled. For the next 20 minutes I helped her go over the various foundations, even helping her match her skin tone resulting in her pick.

She was going on a date with her husband that evening, a date night neither had gotten to enjoy for quite some time. She wanted to have her face made up. They even had a babysitter for crying out loud! I loved helping her. Her oldest son was interested in the Black Widow doll in the cart and I was like, "That's Black Widow. She's pretty cool." He seemed perplexed that a grown woman knew about super heroes. If he only knew right? We exist in large masses, we just hide out sometimes on account of the Terrigen Mist that looms over us all the time.

I felt like a fairy godmother. I had no clue who this woman really was. We didn't exchange names. I have no idea if her husband would be wowed or not by her new makeup or if they'd be too exhausted to enjoy each other on date night. I just know it was nice to connect with this total stranger. To share a brief moment of bonding that involved something so silly yet so important. She was so excited. This made me so excited! Sometimes it's just fun to fall into a world of make believe, it's where all the possibilities truly live.

Life can be complicated. Crazy rude people seem to be multiplying like Jamie Madrox. This brief encounter today made me feel good, that maybe I wasn't surrounded by turd muffins in my real life radius.

After the hot momma and I parted ways, the lilac swoop haired employee stopped to tell me that I should be working in the cosmetics aisle. I simply smiled and thanked him. Currently I'm not in the business of adding a cosmetics job to my routine again, but it was a reminder to me that I've gotten to wear so many hats and identities in my life. I never got the chance to be a cheerleader or prom queen or screen siren. That's ok. I've enjoyed becoming the person I am right now. Now if you'll excuse me, I need to stop yammering on and on because I have a toy story to get to. Toy Miss M is about to reunite with some long lost friends. (hint hint- the kind of princess with a powerful punch) Hope you are all doing well.

Plus, here are some pictures of the toy loot! Seriously, I was so thrilled to see this Black Widow. Way too much fun! 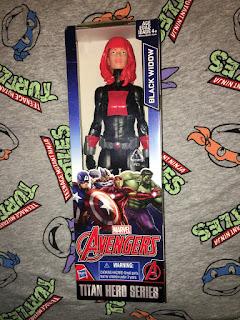 Pardon the Teenage Mutant Ninja Turtle back drop, I was running out of ideas. See what I mean about the hair color though? 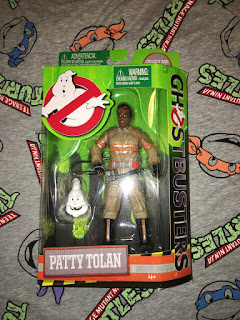 The Ghostbusters figure I picked up too! For those who loathe the upcoming reboot, there is a line of just ghosts that I think will appeal to folks.