We hardly knew ya! Actually we knew too much. Click the link and learn what is new with the dorkette of your dreams. Or nightmares depending. I'm not judging.


Well folks, here we are. At the cusp of a brand new year. I have no idea how this even happened. How did we get here? I know that time is the answer. I understand how days, weeks, and months work but damn time flew by this year. Before I go into the sentiment that many of us feel about 2016 being awful, let me just say that there were some truly wonderful things to happen. I think one of the most memorable moments for me this year involved my getting to know and talk with Justine Dantzer the woman who created the designs and some of the names for the She-Ra toy line. This was something truly epic. I learned things not just about my most favorite toy line ever but also some of my other favorite toy lines that Justine was a part of. Those conversations can be read on this blog, feel free to check them out. This was truly one of the greatest honors I have ever been afforded. I wanted to have more interviews ready however the process for me was one unlike what I normally do. I wanted them to be perfect so they took a little longer to get together.

Luckily I will have one more interview to share in the new year that will involve Justine's work on the Swans Crossing toy line, which most of you know I am a die hard fan of. I have to also thank Jordan Hembrough for making this dream I never knew I could experience come true. I will be forever grateful for that experience.

Other lovely things that happened in 2016 involved a lot of toy collecting. I have to say 2016 was a damn good year for toy collecting. They made a She-Ra doll. ThunderCats came back. Cobra's Pythona slithered her way into our shelves. Star Wars ruled the school. Shopkins captured my heart in a big way. They made a freakin sushi doll! It is adorable. I Am Elemental made a second wave of awesome empowered figures. Speaking of empowerment, DC Super Hero Girls brought super hero fans new versions of their favorites in doll and action figure form. Power Rangers upped their game with nice highly detailed figures that weren't super expensive like those Figuarts versions. It was a great year for toys. I am sure I am forgetting some other epic great toys. Funko Pops come to mind but we all know they made everything under the sun in 2016, aside from Jem and the Holograms. (They'll get to them, I have faith in it.)

My work involving my 9 to 5 job also took a really nice turn for the better. I became a supervisor. For those who do not know I am a marriage and family therapist and the place that I work at is also a training institute for interns who are on their way to becoming therapists. In my mind it is all very X-Men and I am like a Jean Grey type helping the future mutants of America. Or maybe I am a Kitty Pryde type. It doesn't really matter. It has been a joy though being able to supervise some of the interns and helping them through this process.

Of course the elephant in the room is that this year has also been a highly emotional one. I can't even begin to rattle off the list of pop culture greats that we lost in 2016. I don't even know where to begin. I know some people gripe that we don't really know these people so why do we make such a big deal, but for those of us who are touched by pop culture in some way shape or form it does strike home. To be honest I would have never given two shits about Star Wars had it not been for Carrie Fisher breathing life into Leia. She gave me a reason to watch those movies and care. She was also really funny and I actually enjoyed her more in brief roles on Drop Dead Fred and Soapdish. She is of course the most recent celebrity to fall, not counting her mother Debbie Reynolds. I however am not going to write glowing tributes to all who have fallen this year. I have friends who have done a far better job vocalizing my thoughts on such matters.

Death was not just for the stars we saw on our screens or heard through our speakers. I also lost my grandmother this year which has placed me in the weirdest funk. She was a remarkable woman and we were incredibly close. The kind of closeness where people look at my behaviors and traits and say, "How strange, your grandmother would do that same exact thing." She became ill this year and my family and I took care of her until we could no longer do so. The last number months have just placed me in a weird way. Well it was a one two punch. I lost my grandmother and then a few weeks later I became single again and this was a relationship I had really thought I had gotten it right with. It really seemed like I had found someone I could have a family with. Oh well, don't cry for me Etheria, I have a toy collection.

So those two events just placed me in a funk for the rest of 2016. It shows. My posting has dropped considerably. I am hoping to change that though as we cautiously walk into 2017. I miss my toy stories and just posting about everything else in between. So that is really it. I just wanted to leave a little update and I hope that you are all doing well. Happy New Year everyone. I thank you for always stopping by and don't worry, I'll be coming back better than ever in 2017! I hope. Right? 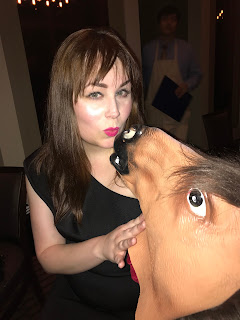