Mother's Day is Begging You...

... for no wire hangers, ever! Ok, I thought I had seen it all. But, I guess there is still plenty to surprise this broad. Read on for a tease at an upcoming set from Integrity Toys.


I love Integrity Toys. I'm not crazy with their high prices, but they make some high quality stuff. After all, they have really done something special with the new Jem dolls. Integrity Toys are also responsible for lots of other stuff too. For example they made some fabulous RuPaul dolls that were on sale really cheap on their store site recently. I scooped some up for gifts this past Christmas. My brother and some friends all watch the Drag Race shows and I thought, "Who wouldn't want a RuPaul doll for Christmas?" And that is just what they got!

But there's more! Integrity has made dolls to Breakfast At Tiffany's and even recently Sunset Boulevard. They have been part of a licensing deal in association with Paramount. It is cool to see dolls made to such wonderful films. I just recently found out though that they are making a nice set to one of the best movies to quote either at parties or while on Bourbon St.

Yep! Mommie Dearest dolls! (Let's just hope they don't wake you up in the middle of the night to scrub a bathroom floor or something.) 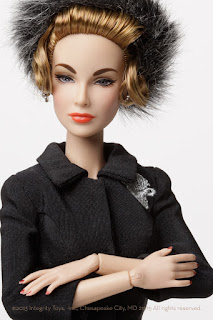 So I don't know if Integrity is planning on expanding this line, but so far all I know is that they are making a doll set of Joan Crawford played by Faye Dunaway from the 1981 movie that was based off the book written by Joan's daughter Christina Crawford. 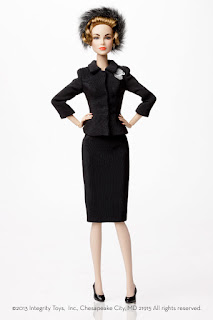 This is one of the doll looks that is a part of the set. Integrity is doing something new with this set, they have one doll body but have created a Quick Switch feature to swap heads for two distinct looks. This first version is alright, it is from the part in the film when Joan confronts the MGM board I believe. It is when she says, "Don't fuck with me fellas. This ain't my first time at the rodeo." The detail looks pretty. However, aside from the eye brows, this doll could really pass for anyone. I think it is because her eyes look more seductive instead of that crazed mad expression.
The next doll look really gives it that extra dose of mommie dearest madness. 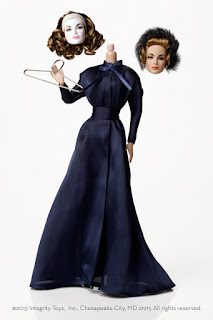 Integrity Toys totally went there. The second part of the set has Joan with some night cream on her face, in her night gown, with a wire hanger. Oh my goodness, this is just too much for me to even process. 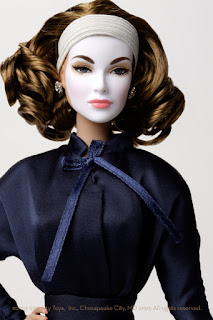 I mean it is a Joan Crawford doll with face cream. I'm speechless. My brother and I would watch this movie on a loop. It was just a strange film, made even stranger because it was based off real events. We'd just be glued to the screen either quoting the film or thanking our lucky stars that our mom wasn't hitting us with wire hangers. Although I must admit, when we really wanted to annoy our mom, we'd call her Mommie Dearest. Oh how she hated that with a passion! "Stop calling me mommie dearest! I'm not wicked like her!" My brother and I were terrible. And my sister-in-law loves the movie too, so when the three of us are all together we will just start quoting the movie. "Christina! Bring me the axe!" That is my favorite. Just a total out of control mess. I think if anything this is the perfect version from the film. There is no mistaking who this is supposed to be. If you have never seen Mommie Dearest, you must. It is something else. It's campy, creepy, and it just pulls you in. I went through a phase where I was obsessed with old school Hollywood stars. I found myself particularly immersed in the long standing feud between Joan and Bette Davis. I need to see if they are on YouTube, but there were all these old interviews where they'd both be cutting each other to shreds. And Bette Davis always had the best comebacks. I love Bette Davis. We share the same birthday, and I like to think that some of her attitude resides in me. 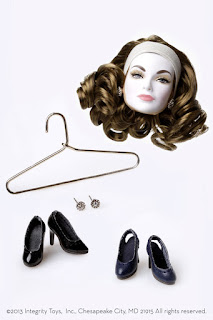 Here are the accessories. I can't get over that they include a wire hanger. Oh all the picture possibilities! I can't wait to see what Integrity comes up with next. For those interested, I believe this set comes in around $150 and they can only be purchased from officially licensed Integrity dealers. The list of those dealers is right here.
Anyways, I must be off. I took a break from writing a nice little review on Kimber which will be up on NerdSociety soon, and I am also working on an all new Adora's Search for Honor! That whole bit with Adora and Sea Hawk was pretty hot, no? Well, if you thought it was tepid at best, just wait! Things heat up between the two for sure. Poor Bow!
Take care everyone!
Posted by Michael Lynn P. at 7:44 PM