Toy Chest Tuesday always comes and goes, but there can only be one August 2013 Bodacious Baddie! Click below and read on as I interview one scary baddie! (Toy Chest Tuesday will be back next week.)


Every now and then a threat of evil comes around with dastardly intentions, but it is the overall look of said threat of evil that sends the true chill down a person's spine. With girls night-ins and funerals for figures behind me, I got the chance to sit down with one of the scariest baddies to haunt my psyche: the red faced demon from Insidious! 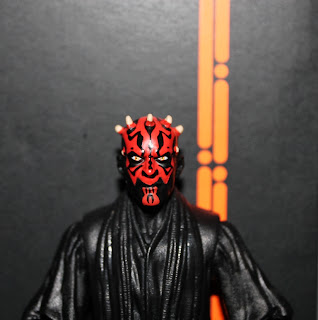 Diary of a Dorkette: I know I tend to geek out over the people that I interview every month, but I have to say, it is something special to be meeting you. Your gripping portrayal as a demon from the astral dimension bent on possessing a child living in the real world was absolutely thrilling. Tell me, will you be returning in the sequel to Insidious?
Darth Maul: What are you speaking of Earthling? Do you know who I am?
Diary: (looking slightly sheepish) Of course I know who you are. You were that creepy thing that kept jumping out from behind people. I don't understand, should I know you from something else?
Darth: I am Darth Maul, you menace of a girl. How dare you not know who I am. 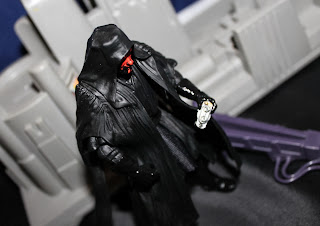 Diary: O.M.G. I thought you looked familiar, but I guess it just didn't click that it was actually you. I mean why would I be interviewing some Sith dude?
Darth: Why not?
Diary: Well, honey, come on. The last time I saw you, you looked like a magic trick gone wrong.
Darth: I do not follow.
Diary: Well you know... you were sliced in half. How are you even talking to me right now? Is this even real? (slightly beginning to panic) I didn't die again did I? 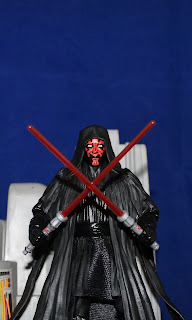 Darth: If you wish to be dead, I can certainly make that happen.
Diary: Oh no, I'm certainly fine here on Earth. Let's see, if you are alive, how do you explain what happened to you? Like you can walk... 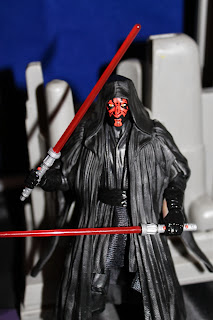 Darth: Of course I can walk. How observant of you. Has this become the state of journalism today?
Diary: Oh don't worry, it can all get much worse.
Darth: Ugh. If you must be so inclined to be nosey, I have Hasbro to thank for my sudden return to form. They put me together in the best way possible.
Diary: I completely agree. Now that I know who I am talking to, I must say, you look better than ever. Now that you are joined at the waist again, what are you, six inches tall now? 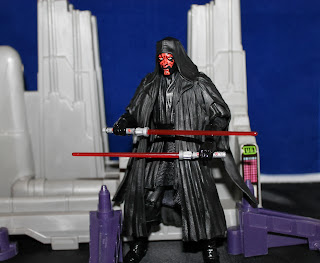 Darth: Give or take.
Diary: Perfection. I have to say, I don't know what took the world so long to catch up to this new look. You carry such an intimidating presence with you. I love it.
Darth: I thank you. It is nice to move around again. I must say though, my joints are pretty tight. I'm still gathering my faculties about my body being in one piece.
Diary: Well tight joints are always perfect for most toys. No one wants the sad little loose thing. Ya know what I'm saying? 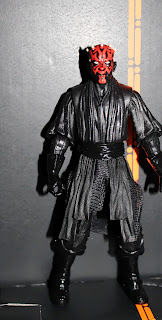 Darth: No, I don't.
Diary: Now that you are running around again, what are you going to do with the rest of your life?
Darth: I have no idea. The life of a Sith Lord is not meant to last too long.
Diary: Let's see, now that I know which movie you are from, you could always talk to J.J. Abrams and see if there is a spot for you in the latest Star Wars movie. The world is going to flip come 2015.
Darth: This idea makes no sense. I died in the Phantom Menace. I doubt I would be asked to return. Star Wars is not some dumb soap opera.
Diary: Hey! Watch your ugly tongue! Soap operas are everything. 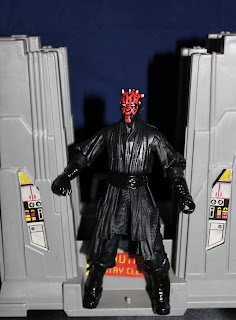 Darth: Maybe to you. There is no reason though to tarnish Star Wars by bringing me back from the dead like they do on a soap.
Diary: Well, it could happen. Besides, Star Wars is essentially a soap opera set in space.
Darth: How does your feeble mind even reach that conclusion?
Diary: Umm, hello! For a Sith Lord you sure are stupid. You'd think it was your brain that got sliced. Star Wars is chock full of soap staples. 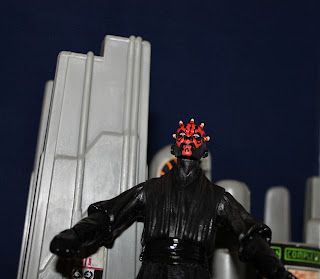 Darth: Impossible. Nothing you say makes sense.
Diary: Come on, expand your imagination! The original trilogy had the issue of paternity as a focal point. There were all kinds of betrayals and scandals. A love story was sort of brewing. It was all like a Soap Space Opera. 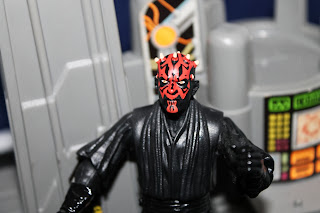 Darth: You make me so mad. Why do you have to exist?
Diary: Believe me, I get that a lot. So while you were resting and healing from your injuries, did you watch any movies? Or listen to any cool music?
Darth: You wouldn't know the music I listen to. 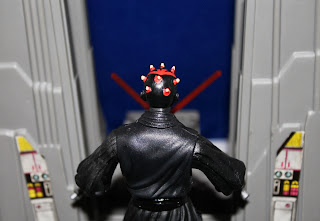 Diary: Ok, what about movies? I'm sure I'd know some of those. I don't think there are any movies in space, so Earth is truly where it's at.
Darth: That we can agree on. I like all kinds of movies. I really love anything that Ray Park is in.
Diary: I've never heard of him, I'll have to imdb him later on. 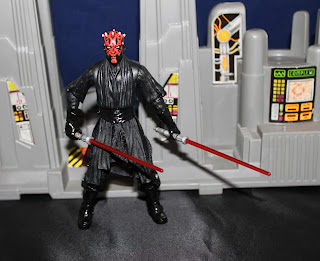 Darth: Is this almost over yet?
Diary: Not yet hon. I still want to learn more about you. It's not every day I get to talk to Bodacious Baddies. Do you have a favorite food?
Darth: No. I do not eat food for enjoyment. 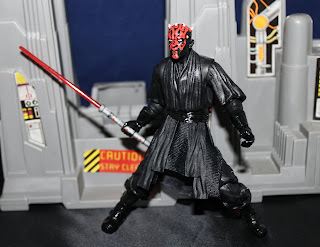 Diary: Oh. (looking around, thinking of more to talk about.) I'm actually running out of steam. I must admit. I guess I'm just a little disappointed that I'm not interviewing the demon guy from Insidious.
Darth: What kind of asinine questions would you be asking him?
Diary: Oh all kinds of stuff. Like what is the astral dimension like? Can you find true love in the astral dimension? What do you do if you have to use the restroom? The important things. 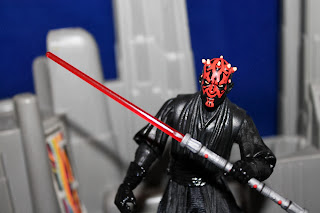 Darth: That sounds like a boring interview.
Diary: Well, what do you think about being the Bodacious Baddie for the month of August?
Darth: Insulted actually. You didn't even know who I was!
Diary: Oh goodness, don't get your light saber in a knot. I'm sorry! It is an honor to have you as the Bodacious Baddie. It really is! (whispering) Please don't kill me. I've got enough villains after me...
Darth: Ha. You're not half bad dorkette. (whispering back to her) And that was actually me in Insidious. Shh. I like being known for Star Wars more. 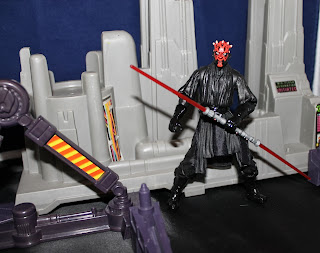 Diary: (in total shock) No freakin way.
Darth: Way. As you Earthlings might put it: I just blew your world.
Diary: Careful! This is a PG rated blog! Now that you have been named the Bodacious Baddie and can probably meet anyone you want, to say nothing of getting inside the coolest restaurants and clubs, who do you hope to meet with this new found fame?
Darth: I'm very interested in meeting Shelby the Swamp Man. People from Earth are... interesting.
Diary: Ok. I hope you get to meet him! Maybe you can both hunt nutria rat together... Well Darth Maul, it has been a pleasure.
Darth: Yeah. Thanks for featuring me as this whole Bodacious Baddie nonsense. I feel more... whole. 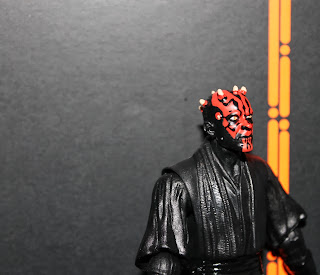 August 2013 Bodacious Baddie
With an all new Bodacious Baddie behind us, I left the interview feeling confident. All right, maybe not totally confident, but I feel like Darth Maul had a good time. My only problem now is that I have 17 missed phone calls on my cell. What on Etheria is April O'Neil doing calling me so much?
Hoping to quickly hear from my mentor and friend, I'm thrilled when she picks up on the first ring, "M! It's you! Where have you been?"
"I've been busy interviewing this month's bodacious baddie, what's up?" I wait a beat, hoping everything is ok. "Have you heard the news M? The sub passed!" I catch my breath, "April, I don't care about the story of your lunch..." April screams in my ear, "Don't be lewd! I'm talking about the Masters of the Universe Classics sub! It went through! 2014 is a go!"
I can only breathe a sigh of relief, "Really?" I can just see April smiling on the other end, "Yes M! It is happening! Glimmer here we come! Now listen... remember what you said?" I can only pause, "What did I say?" April groans, "Don't play dumb. We made an agreement that if the subscription passed, we'd have a huge party at your place to celebrate. So is it ok?"
"Sure April, that's fine." April completely flips out, "No, but really, we can have a party? At your place?" I sigh, "Of course. You're already having the party at me house, aren't you?" I can hear April chuckling to herself, "Maybe. We'll all see ya soon girl!" I can only shake my head as I hear the phone click on the other end. "Great. I'm going home to a mess, I'm sure..."
Next Time...
Find out what happens when folks party too hard at Miss M's! Can the August 2013 Heroic Hottie save the day? Stick around. For now, enjoy the August 2013 Bodacious Baddie!
Posted by Michael Lynn P. at 10:00 PM