A Call to Action!

While I get some new stories typed up and ready to go, I wanted to share another fun Kickstarter campaign that is bringing forward a new action figure to the masses! If you are interested, check it out!


Recently an employee at FCTRY (a production design studio based out of Brooklyn, NY) reached out to me and asked if I'd be interested in passing along info on their Kickstarter campaign. I am always honored when someone asks me to post or share something that they are working on. I am a big believer in supporting people and their various projects. Especially when it deals with action figures. The more action figures there are for all ages, the more the rest of the world can see that adults collect too, not just the young sprites that run about in this grand world of ours. Either way, FCTRY is using Kickstarter to help fund their Hillary Clinton action figure.

Now action figures based off of real life people in the public sphere is always interesting to me, if only because I am a bit old school. I love my plastic to be more super heroes and warrior women, but this is a fun campaign that also works on many different levels. It might not be for everyone reading right now, but for those who are interested, here is the link to the full Hillary Clinton Action Figure KickStarter page.

The project has already been funded but there are still 12 days left to go for those who would still like to donate. FCTRY has enlisted Mike Leavitt to do the sculpting for this Hillary Clinton action figure. This project is yet another example of people having a different option for how they would like their action figures to look and be available to the world. Plus for those who support the Hillary Clinton figure campaign, FCTRY is offering incentives that include postcards sent to Hillary Clinton, shirts, and of course the action figure herself. They have also partnered with MakerBot and offer folks the availability for everyone to download a free 3D Hillary Clinton figure. I mean, it's no Jaws 3D, but a 3D action figure sounds interesting. On a side note, I don't even think I can comprehend what goes into a 3D printing. I feel like I live in the future now. Stuff can be printed in 3D! That's just magical. 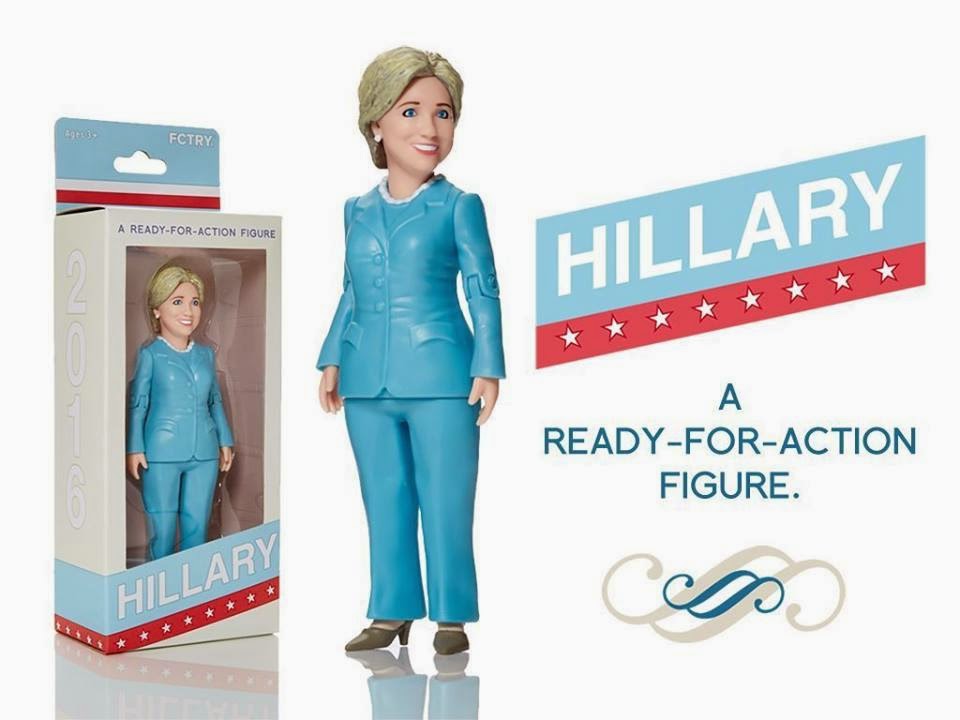 Here is a shot of the figure and the packaging she will come in. The sculpt is nice and captures the look of Hillary Clinton without trying to be too realistic or too cartoony. 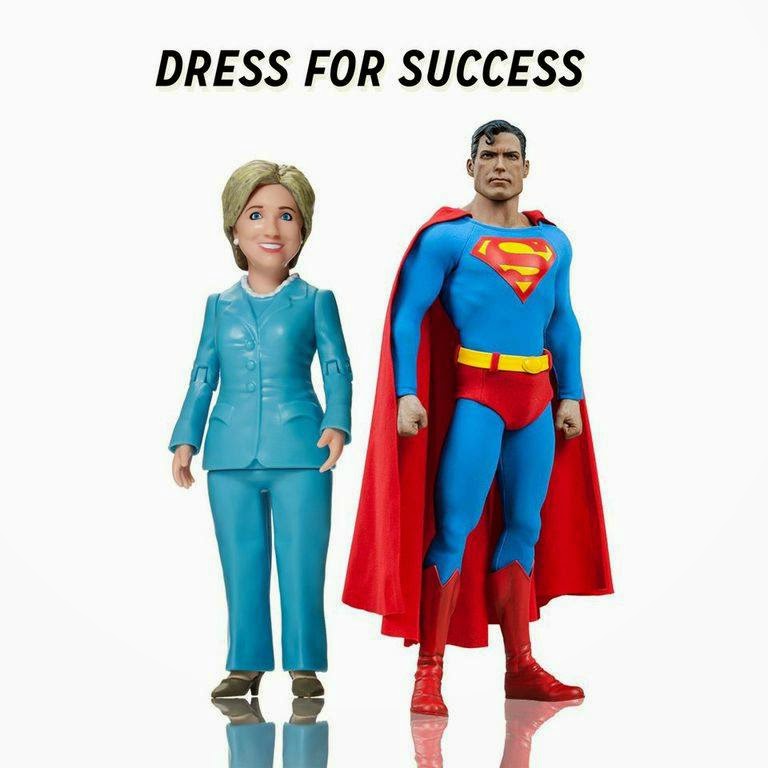 She is dressed for success! I actually love a nice pantsuit. I don't wear them that much because my real life job is the kind that requires me to dress down or run the risk of people hating on me and throwing chocolate milk or Cheetos on my clothes. Powder cheese spots do not look good on any article of clothing. Le sigh. I think pantsuits are fun to say nothing of a jump suit. I live and breathe for a good jump suit. They are so much fun, even though trying to use the restroom can be a pain. For the jump suit, not a pant suit. Pant suits are just fine when it comes to using the restroom. I know a great deal of things. It's called wisdom. 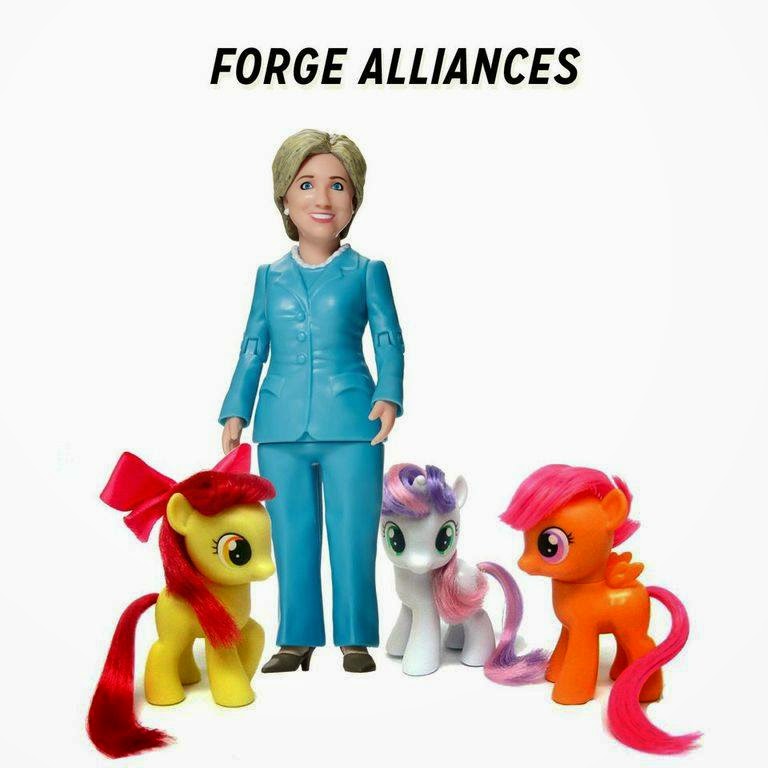 There are some clever photos used as digital assets for this project, but this one is my favorite. Who wouldn't want to forge alliances with ponies? After all, Pinky Pie does make the perfect spirit pony. When she isn't about to be turned into a club drug called Plastic. (For those tuning in, check out the March 2015 Heroic Hottie post below.) 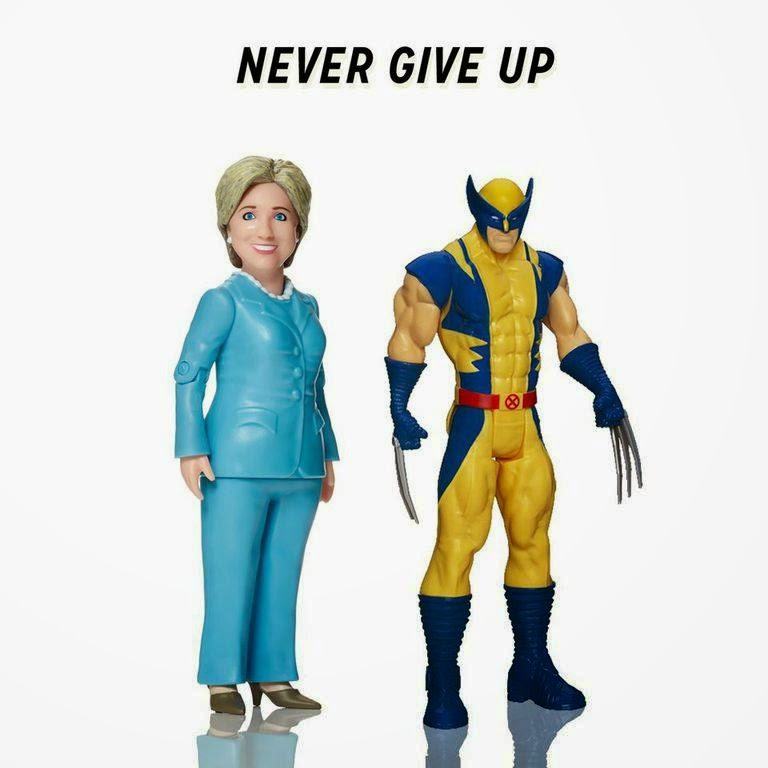 Never give up. Could you imagine what it would be like if Hillary Clinton were engaging in world affairs with the X-Men? How would that even look? I mean obviously she'd support mutant rights, but would that alienate certain mutants? Would Magneto have a bug up his butt about her? Would Wolverine and Hillary form their own X-Force team? Is that even something that should be said? I don't know. I just think this is all fun.

Regardless if you support or her not, it is nice to see such an array of varying types of action figures for our mass market consumption out there. So if you are interested in contributing or learning more, check out the Kickstarter project! Interested in learning more about FCTRY? Head here.

That's about it for now. We are getting ever closer to my 500th post which means fun and goofy stories, a ball, and a giveaway! Like, huge giveaway. It is going to be epic. So get your toy shelves ready!