Hey everybody. It's been a long past couple months. So click the link below and let's talk about some fun stuff.


That whole Toys and Troma tribute thing took the wind out of me. I hadn't realized it was going to take so much time to do. It was a huge undertaking for me but one that I had a lot of fun doing. I am not going to try and act like Troma is my most favorite thing ever, however there is a soft mushy grody spot in my heart for the Troma films I watched and those memories I had with friends and just the outrageous things I got to see throughout the years. I had intended to just tell my own toy story but in the process I also had learned that there was a Kickstarter for Troma that I thought would be fun to share too. It became a really fun writing process.

I was even asked by the Troma Twitter handle to create a fun little music type fan video for the Save Nuke 'Em High Kickstarter campaign. I really wanted to do something but I just have not had the time to really create something. I also have no clue how to record something on video. That makes me a little sad. I should work on creating new skills for myself. Either way there is the Toys and Troma tribute.

Let's see. What else do I need to share? I've been enjoying my time with the guys from Eclectic Mayhem. We have recorded some episodes that are really entertaining and I am looking forward to what we have planned in the future. I am even taking on a challenge from Brian over at It's Trash Culture that will involve our fourth episode that has not aired yet. It's been a lot of fun being a dorky gal able to talk with some dorky friends.

Oh! For those who have been following the toy stories of Miss M and her friends for the past couple of years, get ready! I've got some fun stuff coming up. I fell behind on some toy interviews and other things but all of that is still going to be posted soon. I just have a lot of catching up to do. I do thank you all for taking the time to read the stuff I write. It always means the world to me that someone would take the time to check out anything on this Diary, even if it was just a glimpse. It's great.

I try to stay away from eBay if only because it can become addictive for me. There are certain toys I search for on a regular basis on eBay just to see if anything new comes along or if there are any good prices. Mostly because I know these particular items I am referring to I'll never see in my personal shopping excursions in the real world.

Take for instance the vintage Kenner line Glamour Gals. One of my favorites as a kid, I hardly ever come across these tiny G.I. Joe sized gals in the real world. This is Dani in Silver Shimmer. She was purchased loose but in new condition and I paid less than ten dollars for her which some might say is high way robbery, but that price included the shipping so I am not about to complain. She even had the cello wrapped around her head as if she had just been removed from the package. For a look back on some of my other Glamour Gals items, click the link here.

Another fun eBay purchase I stumbled upon was a lot of vintage Muppet Babies Happy Meal toys. 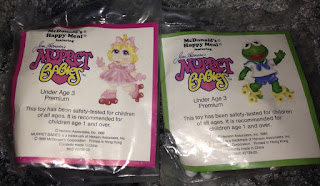 These two are completely new to me. I have never owned them but I love that I now do. I make no bones about it, I am a fan of Miss Piggy. She is a diva and slightly obnoxious, but I feel that her love for her Kermie is real. And if I were her I'd tone the bitchiness down just a bit and really find a way to get that green frog to truly love me. Or maybe he secretly does love her. Ya know some guys pretend that a diva type woman is too much for them, but they love it deep down. Or so I've heard. Don't come to me for advice on matters of the heart. I play with toys and live in a room with blue shag carpet from the seventies. (That lovely blue shag makes a great backdrop doesn't it?) 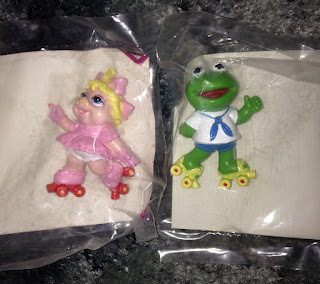 Anyways, these pvc Muppet Babies figures were the toddler toys from the Happy Meal campaign, and I wish I had known about them when I was a kid. The colors pop and I like the poses the figures are in. 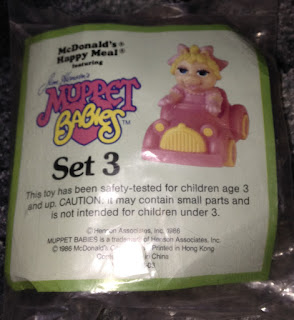 This was the other Muppet Babies toy that was a part of the lot. I loved this Happy Meal series as a kid. I still have my originals but it is so nice to have this one with the card inside. It just brings me back to being young and stuffing my face with french fries without a care in the world. 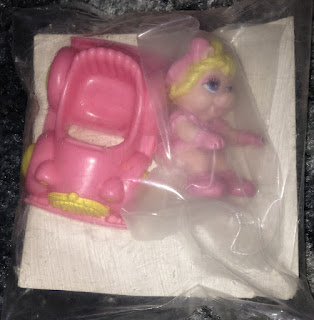 I thought it was so fancy that McDonald's gave us not just a mini figure but a mode of transportation too. I just felt like I had made it in the world. Travel with me for a moment as I drive you down the dorkette memory lane. I was born a collector. When I saw that this Miss Piggy was a part of the Happy Meal campaign, I begged my parents to do everything in their power to find her for me. We ate at McDonald's a lot. Every time I'd open my Happy Meal box I'd be knocked back as the toy inside was either Fozzie, Gonzo, or Kermit. Never Miss Piggy. I began to panic because every child addicted to the Happy Meal knows that eventually that specific toy campaign will go away. I had to have a Miss Piggy before that series was over.

Tired of feeding me deadly fast food, my parents were like, "We'll just buy the damn toy." So we pulled out the trusty phone book, and my dear mother called through the list of McDonald's restaurants in the area asking if they had a Miss Piggy toy. I remember this day so vividly. It was a rainy day. Everything seemed dark and foreboding. I was on the edge of my seat every time she called, fearful that we were wasting our time and that my chance had passed. Finally my mom got in contact with a McDonald's that had a Miss Piggy. It was far away, but my mom and I made the drive in the crazy rain and soon I was the lucky owner of a Miss Piggy Happy Meal toy.

The sad part to this story was that a week later Miss Piggy was everywhere and I ended up getting a second one in my Happy Meal. I may or may not have issues with patience, I don't know, but whatever. It's one of those toy memories I can never forget.

There have been some pretty lucky finds at my comic store too. They have this spinning rack that is full of loose bagged toys and every week there is something new to behold. In the last few weeks I have managed to come across these little gems... 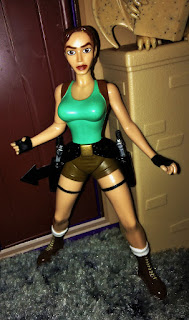 Lara Croft! I loved this line of Tomb Raider toys from Playmates. I only had one of the figures from this line so to have this one now is just perfect! I love unexpected surprises. This is the sort of thing I would not think to look up on eBay, but coming across it in a store is more than enough to make it a new addition. 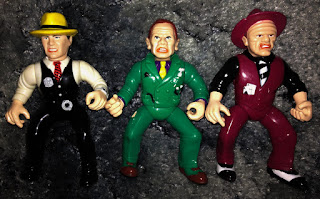 I also found a bag of these guys! Dick Tracy figures! Growing up I had a bitter relationship with the Dick Tracy toy line. I loved the movie. I loved it. I had a large amount of the movie merchandise because it was Dick Tracy! It was a huge movie event. However I never really owned a lot of the Playmates toy line because there was a huge hole missing where Playmates should have made Breathless and Tess figures. I'm still harboring a grudge for that error in judgement. Nonetheless I am older now and ready to own some of these guys. I've been looking for a Dick Tracy for years now, so it's great to have him. I'm happy to have another Influence (the middle figure) as the one I had from my childhood has some spots on his nose that can't come off. Also, who doesn't love the Brow? Aside from Flattop and Pruneface, the Brow is one of my favorite facial effects characters from Dick Tracy. Oh goodness I remember this property so fondly. 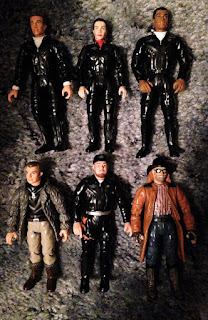 Next up was a bag full of SeaQuest items. I'm only showing the figures that were in the bag, but there was a ton of other stuff included. Now I'm sure you might be wondering, "But M, why do you want raggedy old SeaQuest toys?" Oh there's a big reason why I have been looking for SeaQuest items. Captain Nathan Hale Bridger was played by Roy Scheider. Roy Scheider was Police Chief Martin C. Brody in Jaws. I love Jaws. I love Jaws 2. I freakin love Jaws 3. And I love Jaws 4. So I have been toying around with some ideas for this summer that will involve toys and Jaws, so naturally I have been more than thrilled to come across SeaQuest items at my comic store. (There aren't a wealth of Roy Scheider figures ok?) Which brings me to my next collector point. I've been shopping around for a great white. I wasn't quite sure where I'd find one, but it's simply kismet thanks to Funko and their Reaction line... 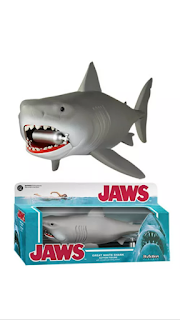 This stunning toy is coming out in July and it couldn't arrive at a better time. I was thinking I'd have to end up finding some basic old rubber shark that squirts water out of its mouth, the kind we all played with as kids. Luckily the lovelies at Funko are releasing this. When I tell you I am so freaking out in excitement, I am so freaking out in excitement. This is the kind of stuff that makes my mouth water. That toy shark is simply too epic for words and will hopefully make this toy story I have in mind that much better.

Anyways, what are you all collecting, listening, or seeing right now? I saw the first episode of Daredevil on Netflix and I'm hooked. I just have to finish the season. I also saw Jurassic World and actually walked away rather liking it. I think what helped was having incredibly low expectations. It's a fun movie though. It isn't Mad Max Fury Road or anything, but it'll do. Also, Final Fantasy VII is getting a splashy flashy remake. The long standing rumors are finally coming true. It's about time! Anyways, I hope you are all doing well! See ya later, alligator! After dark, great white shark! (I couldn't resist.) 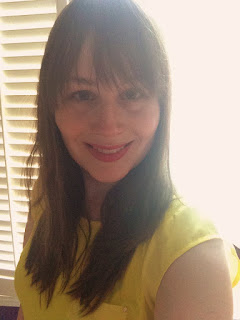