Alright toy fans, this is a big week for the dorky community. San Diego Comic Con descends upon Earth this weekend. The masses will be out in full force to celebrate many wonderful aspects of popular culture. One of the things I am looking forward to are the toy releases. Toy companies large and small will be heavily teasing and promoting their items for the upcoming year.

There are a few things I am looking forward to. Obviously I'm frothing at the mouth for the new releases from the Masters of the Universe Classics line. I am also ready to scream, "Showtime Synergy" for any news or pictures on the new Jem collector line by Hasbro and Integrity toys. Hasbro also has me curious to see what they have in store for Marvel Legends. There are actually many things I am excited to see and read about on the toy blogs over next weekend.

However there is one more bit of info that I really hope to see come out of SDCC. Mattel has a line on Mattycollector.com called WWE Legends. Last year fans got to vote on who would be featured in the line. I was overjoyed when Miss Elizabeth won the vote to be made into an action figure for the WWE Legends line. With a tentative release for November, I have my fingers crossed that we see her at this year's SDCC.

Now if you've been following this lil blog, you know that I have a very fond spot for Miss Elizabeth. Growing up my dad was never big on having his toes painted or playing tea with me. He wanted to do what he wanted to do, and if I was going to have any father/daughter bonding, I'd have to just deal with it. So we watched a lot of WWE (or rather the WWF as it was called at the time.) We also enjoyed playing Jeopardy on Nintendo.

So I grew up watching the lovely lady Elizabeth. And I grew to really look up to her. I thought she was kind and compassionate. And very glamorous. I wanted to be just like her. My dad also really enjoyed watching WWE with me. He got a kick out of the stories and stunts that the characters of the wacky WWE got themselves into. We also both flipped for the Ljn Wrestling Superstars toy line. My dad couldn't believe that some of the greats were given the toy treatment. I flipped out when my cousin told us the rumors of a Miss Elizabeth figure!

Anyways before I say anymore, let me share a little detail. I grew up sick. I was born with a genetic disease that took the medical community awhile to figure out I had. Needless to say I was bounced from hospital to hospital. There were days that I would be fine and others that I'd be down for the count for awhile.

One particular day I was feeling awful, just awful. I had a bad run that lasted a few days. Severe bone pain. Vomiting. Just a complete feeling of weakness. But my dad had called to tell me that he had a surprise for me, and when he got home from work he'd give it to me. I was not even sure what kind of surprise he was talking about. But it certainly got my mind off of being so sick, if only for a little bit.

So eventually my dad came home, and I was curious to see what this surprise was. He had something in a plastic bag and once it was removed I just about jumped for joy. It was a brand new Miss Elizabeth! My dad had stopped in a Toysrus just to look and see if there was a Miss Elizabeth, and after talking to an employee, he was able to get one. I was blissfully happy.

With that all said, I thought what better way to celebrate SDCC and the hope for a sneak peek at the new Miss Elizabeth than by looking back at the old one! Toy Chest Tuesday is ready to ruuuumble!!! 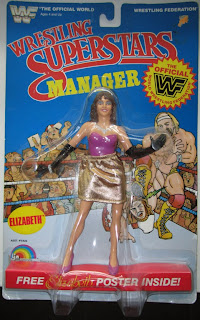 The Wrestling Superstars were giant rubbery figures. They came with posters and a few came with removable articles of clothing. Miss Elizabeth had a removable gold lamé
skirt. These figures were also pretty heavy, so the card was made with thick cardboard. 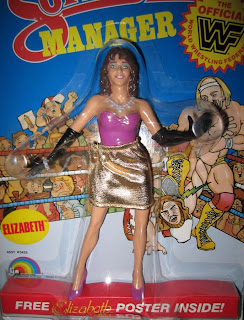 Here is a closer photo of the figure. She featured loud '80s eye make up and fancy gloves. For a brief moment in time I was obsessed with wearing gloves. I felt so classy. I also believe my penchant for gold lamé came from this toy. Or it was Glitter 'n Gold Jem, I can't really recall which. But I loved this figure! These toys were billed as figures that could be twisted and turned into all kinds of wrestling positions. I don't know about other folks, but they never moved that much. I guess if one was rough with the toy it could have moved in certain places, but I was more delicate in my play. 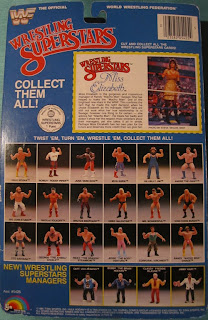 The back of the card featured a line up of possible figures to collect as well as a cool Wrestling Superstar card. I believe Miss Elizabeth was the only female from this line. I would eventually have a Hulk Hogan, because I figured Miss Elizabeth would need a boyfriend. (Hey I tried for a Macho Man, but was not lucky.) Anyways I've always been very weird about that. I have to buy things coupled up with something. For instance my mom and I were shopping once and there were these two cute duck plates for Easter. Each had a different design and I was like, "We must buy them both! They're soul mates and can't be separated." Someone just put me on Hoarders already. Put me out of my damn misery. 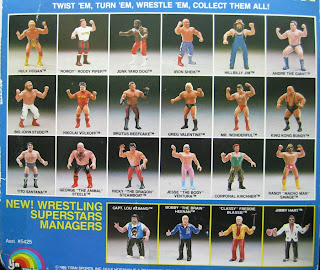 The lineup of figures to collect was impressive. I was not really interested in collecting a lot of the figures. However I was always curious to own the Jesse "The Body" Ventura Superstar figure because he wore pink pants. I always thought that was cute. But for the most part I just felt indifferent about owning these figures. I mean what was I going to do with giant male wrestling figures, essentially, in their underwear? Though I will say this, Jimmy Hart reminded me of one of my uncles. 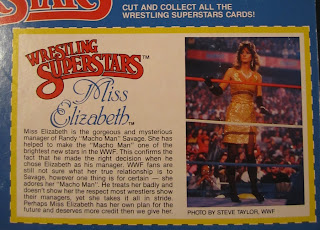 As I have mentioned before on Toy Chest, I love cut and collect cards on the back of action figures. Little bios add so much to the overall product. Miss Elizabeth managed Randy "Macho Man" Savage. She also had a rivalry with "Scary" Sherri Martel. I fondly recall their rivalry and always liked that they were actually very close in real life. Of course there was also one of my favorite angles involving Macho Man and Hulk Hogan and who Miss Elizabeth would be standing for in the ring. Such good soapy drama! (She would stand by her Macho Man though, as they'd get married and divorced in real life.) Going back to the bio card though, Miss Elizabeth was portrayed as being gorgeous and mysterious. But things kind of turn into a "huh?" moment when, describing Macho Man, the card reports, "He treats her badly and doesn't show her the respect most wrestlers show their managers, yet she takes it all in stride." That just sounds so sad and unfortunate! I mean it was part of a fictional story, but it is kinda weird to read that. And a bit sad, because Miss Elizabeth died in 2003.

I was so devastated when I found out that she was no longer alive. It was Miss Elizabeth! How could she no longer be with us? Reports were that she had died from a drug and alcohol overdose. She was with Lex Luger at the time. This is just my personal opinion, but she deserved much better outta life. She was such an important part of my childhood and imagination. I wish she were still here. This is all the more reason why I really hope we see the new Miss Elizabeth WWE Legend figure at SDCC. I think it high time a nice figure is made to celebrate and honor "The First Lady of Wrestling."

So enjoy the walk down Toy Chest Lane! And be sure to comment your memories of the Wrestling Superstars figures! As well as your hopes for what comes out of SDCC this weekend! Be sure to check back soon, as I still need to crown the Heroic Hottie for the month of July! Until next time...
Posted by Michael Lynn P. at 8:26 PM