﻿
Toy Chest Tuesday is continuing from last week, with a closer look at the Addams Family figures from Playmates, based off of the cartoon from the 90's. For a recap check out the Toy Chest Tuesday from last week. Each figure had a fun feature that is hard to capture through pictures, but I will explain in the best way possible. These toys were really fun and perfect for the upcoming Halloween holiday!
Lurch 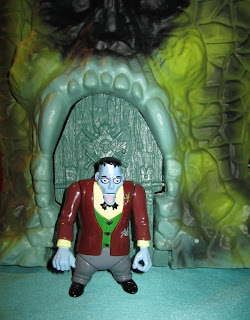 Lurch was the Addams Family butler. He was likened to Frankenstein's Monster, but was really just a jack of all trades. He was always a strong solid force in the family and his figure was a hulking piece of plastic. A button on his back raised his arms up in the air while the button also lowered his mouth. He also came with some plastic sheers and like all the figures in the line, he also came with a Thing. Each Thing was unique, and Lurch's Thing was holding some rope. I sadly have lost the pieces that came with Lurch. Of course now that I have posted this, I will more than likely find them in a few days.
Uncle Fester 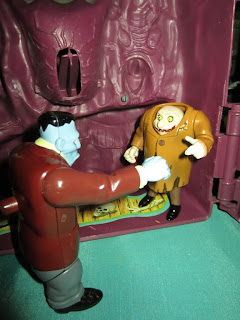 Uncle Fester was the goofy uncle that every one has in their family. He liked to plug light bulbs into his mouth and light them up. He had a penchant for wearing dingy clothes and looking like he smells of cheap hooch. He was always up to something mischievous, like with his action feature. All he wants to do is have Lurch pull his finger. 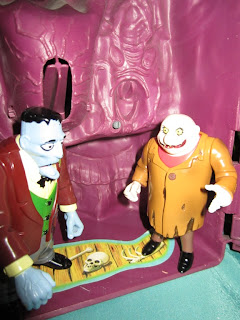 In a positively shocking action feature, Uncle Fester's head pops up. It was a cute feature. Just push the head down, and after squeezing the legs, his head pops back up. Other fun items that came with Uncle Fester included a stick of dynamite and a Thing getting ready to push down on a TNT detonator. The fun thing about this figure, is that Fester looks like he has been in an explosion. And if you look at his face, the sculpt totally is reminiscent of Divine from Female Trouble. I'm not crazy on this one, right?
Pugsley 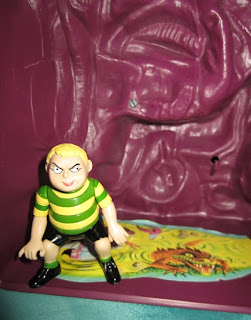 The original problem child, Pugsley has had various changes to his personality from the original series to the various shows and movies. In the animated series he was a very mischievous boy that enjoyed experimenting in terror. His action feature was really fun. Squeezing his legs together caused the figure to raise his arm up. Thing came with a bear trap and once place in Pugsley's hand, the action feature can swing the bear trap around. He also came with a pool of slime.
Granny 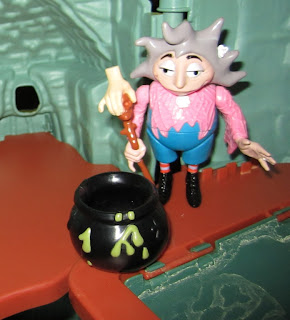 Granny was the fun kooky grandma. With all her witchy sensibilities, Granny's action feature involved some complicated actions. When pushed, the lever on her back caused Granny to stir the contents of her interesting pot. Thing also helped her stir. She moved at the waist and arm with her action features, so she really did look like she was stirring. Also, the figure looked like she was in pants, but Granny was actually wearing a tattered blue skirt.
Gomez 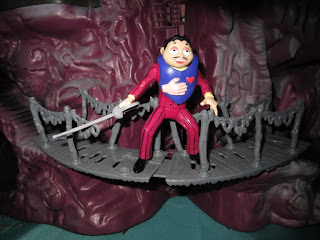 Who didn't like Gomez? He looked real pimp from the animated series, and his action feature was like that of the creepiest cool fencer. Squeezing his leg thrust his arm up so he could use his crooked sword. Thing also made an appearance on his chest armor piece, which was removable.
Morticia 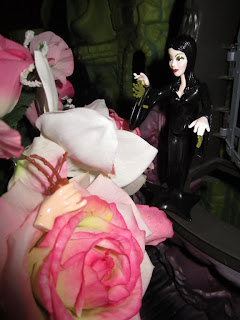 The one and only Morticia came with rather simple action features, but they were super creepy. Hidden dead vines could slide out of her sleeves. When I was young I was slightly creeped out by that. I never would have wanted dead vines in my sleeves. But she looked really cool. Her version of Thing was also really fun, Thing was simply holding a dead potted plant. (That I am assuming came from my house, since I have the deadest of green thumbs.)
The Addams Family 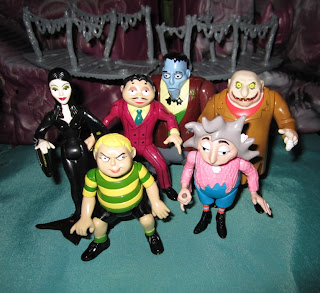 There we have it, a very odd family portrait. Mostly odd for that glaring omission of Wednesday, Cousin Itt, and the larger Thing that Playmates never got around to making. I really wish those other figures had been made. Either way though, the Addams Family was a really fun toy line brought out by Playmates.
So enjoy this trip down the Toy Chest Lane! Snap your fingers and enjoy the pictures of the Addams Family toys. In other news, if you are a fan of the Disney Fairies, check out my review for the new film Secret of the Wings here. And be back soon, there is plenty more awesome stuff coming up on Diary of a Dorkette!