Remember when I said I had a great Dorkette Book Club to talk about? Well I am finally getting my lazy behind in gear and getting everything together! The Mega Man Robot Master Field Guide is the ultimate book for fans of the blue bomber. I personally have had a long love affair with Mega Man for ages. Mega Man 2 was the first Mega Man video game I played, and I was hooked. There was something so fun and exciting about the evil robot masters. As each new Mega Man game would get released, I found myself thrilled to see what crazy robot creations I'd be fighting against next.

When Mega Man 3 came out, Mega Man hysteria was reaching a fevered pitch. At least in my neighborhood. Snake Man was incredibly creepy cool and there was just so much mystery added to that third installment (hello Proto Man.) If the original Mega Man was more obscure for me and Mega Man 2 was seen as a super fun game, than Mega Man 3 fully cemented the idea that Mega Man was on the sort of status like Mario or Sonic. Everyone loves him and there is always hope for another sequel.

So though there may not be another sequel (that I know of) in the works, there is this really fun Robot Master Field Guide by Udon. Anytime Udon publishes a book, you know it is going to be good. They are responsible for all kinds of books that pay tribute to various Capcom video games. So here is the cover: 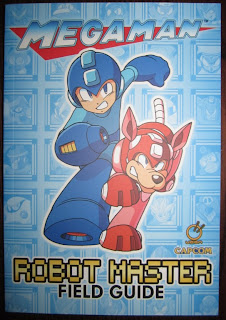 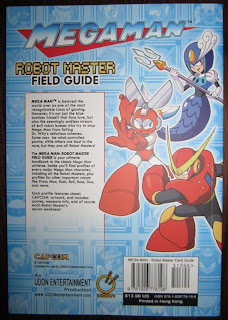 This book covers pretty much every robot character (though not the minor level enemies) that has ever been introduced in the Mega Man universe. It covers the main list of games as well as the spin offs. Also each robot has details like, who was the robot's creator and what powers the particular robot possesses. And for a little over $10 this book packs an affordable punch.

So why should this book be important to your reading list? Well it is nice to have all this information on the Mega Man robots. Some games (like Mega Man 9 & 10) never came with instruction booklets because they were offered online. So to get the details on these robot masters is really nice. Plus I missed out on owning Mega Man 5-7 on account that my old Nintendo stopped working. Let us not forget also, the awesomeness that is Splash Woman! I really hope that there are some more female robot masters to come in the next Mega Man sequel, whenever that might be. So Mega Man fans get it together and be sure to grab your copy of the Robot Master Field Guide!

And be sure to keep it here, because She-Ra Saturday is coming up and the next chapter in Adora's Search for Honor is going to be out of control good. Catra has some plans for a few folks on Etheria and I just can't help but wonder what will happen when Teela and Adam reunite. (I bet she has something to say about that whole Adam/He-Man thing.) Don't miss it!
Posted by Michael Lynn P. at 4:58 PM