Oh my goodness, it is the long lost fifth turtle! Venus! Don't really remember her? Or have really bad things to say? Well before you send me any scathing emails about ruining Toy Chest Tuesday with some blasphemous fifth nonsensical Ninja Turtle, let's take a deep breath and celebrate an all new (and for some controversial) Toy Chest Tuesday!

To be honest I had gone through a few selections for this Toy Chest, and I want you all to know, I take these very seriously. I really enjoy sharing ancient items from my archival room and just reminiscing about the craziness that is toy collecting. Anyways, some of my ideas didn't really fall through because I was missing pieces and what-not, but those toys will show up at a later date. So with all the excitement of the highly successful return of the Teenage Mutant Ninja Turtles, it only makes sense to look at an older relic from a forgotten Turtles line, Ninja Turtles: The New Mutation- Venus de Milo! 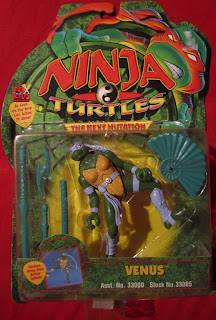 Venus de Milo was a part of the live action Ninja Turtles show on Fox Kids in the late 90's. The show was made by Saban and also had a toy line by Playmates. (They are smart for never letting that toy license go.) Anyways the live action show featured some big changes from the previous series. First of all Shredder was no longer the main villain. April was gone. And there was a long lost fifth turtle named Venus. In keeping with the theme of being named after important Renaissance players, Venus had a name that fit with the rest of the turtles. She was also a strong dividing point amongst fans. Some Turtle fans think there is nothing wrong with Venus and actually like her, while other fans are ardent in their detest. I personally like her. I also like that she got a few versions of her release, because that will be all we get Venus fans! 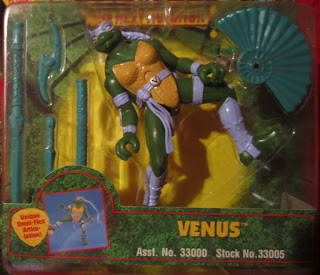 Venus came with an assortment of weapons, but it was the overall design that was cool. She had a light blue color that comes off as periwinkle. Her ninja bandanna had a long braid at the back like a ponytail and she also had some brand new unique omni-flex articulation. These toys also benefited from the advancements in toy making that the late 90's provided. There was more detail and cleaner sculpting on this lineup of Turtle toys. I must say though, I remember the show on television thanks to the Power Rangers/TMNT crossover, but I never really watched this show (no April is a no go.) And I do recall seeing these toys in the ToyFare magazine (oh how I miss that lively publication) but I don't seem to recall seeing this new line on store shelves. Am I the only one? I was still collecting in the late 90's, so I feel like I would have remembered seeing these, but I just remember them from ToyFare. In fact a few years ago I had all but forgotten the existence of Venus. 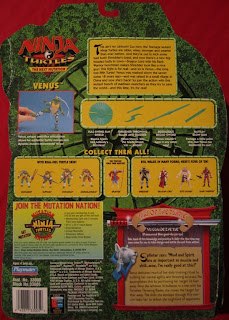 The back of the card was similar to the original TMNT toy line, there was the list of weapons and the line up of the toys. There were even the bios, however the bio look was very different this go around. Instead of the cool clip 'n file system, there was more of a Splinter's "Way of the Turtle" lesson. The fun campy effect of the original line was changed for a more focused style on finding the way of the ninja (turtle.) 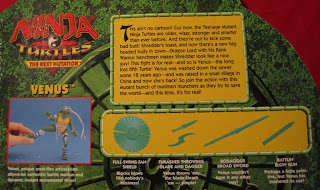 The top bio especially reminds the collector that this line is a total re-imagination of the TMNT. This bio sets up the new world of the show by introducing a new bad guy and a new turtle. However the live action look was meant to capture the feel of the movies, and I do believe there was a bit of story continuation. As for the weapons, I love the full-swing fan shield. They don't really make many fans as weapons for figures anymore. I'm still waiting for Jazwares to make a nice Kitana for their Mortal Kombat line. (Seriosuly Jaz, why no MK female figs? What's a dorkette gotta do to get a Mileena with a busted grill?) The side picture also explains the new authentic battle motion that I believe was used on all the new figures.

Collect them all, says Playmates. And like moths to the flame, we go right on ahead. Who doesn't love collecting TMNT? The fab four turtles looked very different in this line as did Splinter. There was more details and color added to these characters. Just look at Splinter, gone is his burgundy colored robe and instead is a robe that looks like it came from a Benetton ad. The villains were mostly new. Dragon Lord and Elite Guard looked interesting, though Rank Warrior looked like an updated Foot Soldier. And even though Shredder was not the focused bad guy in this line, he was still a part of the toys. In fact I kinda like the look of this Shredder. 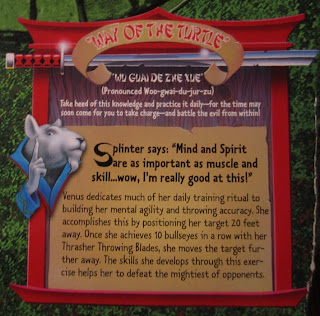 Her "Way of the Turtle" lesson was simple enough. Venus is painted as a very dedicated ninja and really knows how to use her weapons and fighting skills. Of course time would prove to be very short for this masterful ninja and her training in the mystical shinobi arts. This incarnation of TMNT lasted for one season and since I don't even recall seeing the toys on store shelves that should really let you know that this piece of Turtle history would not leave a big mark.
Even though it may not be one of the better moments of the Turtles, I am fond of Venus. I am also glad to have found this item at my local comic store. It is a unique figure, more so because we will probably never see or hear from Venus again. It has been rumored that the creator of the original TMNT comic book, Peter Laird, detests Ms. Venus something fierce. But that is ok. I still love Venus and am glad to have her as part of my kooky collection!
So does anyone else remember seeing this line in toy stores? Does anyone else like Venus? And I do accept scathing emails, but only by incredibly nice people. So enjoy Toy Chest Tuesday! Be sure to also check back, because I have a special Heroic Hottie for November! (and other cool stuff) Take care everyone!
Posted by Michael Lynn P. at 5:38 PM