Oh goodness, it is another Toy Chest Tuesday! I've been busy listening to the Shangri-Las on account that Big Lots had their greatest hits for 5 dollars. I mean you can't beat that. I'm just loving it, and as such it only makes sense that today's Toy Chest has some musical element to it.

Alvin and the Chipmunks. Oh those little critters have been in our pop culture conscious for quite awhile. I can't say that I am gaga over their latest turn at the movie multiplex, but I am very fond of their old cartoon from the 80's. Alvin and the Chipmunks lasted for quite awhile. The new cartoon aired in 1983 and lasted until about 1990 I believe. It was a fun show with a really great catchy theme song. However the most notable addition to this show that had me super thrilled was the Chipettes. As evidenced by this blogs title, I am a sucker for putting an "ette" at the end of things. The Chipettes were just great.

What was even better was the various toys and items that were made to celebrate this cartoon. At the end of the Chipmunks run, McDonald's released a very cool Happy Meal line up that was the perfect blend of Chipmunk mania and kitschy cool music. Let's look! 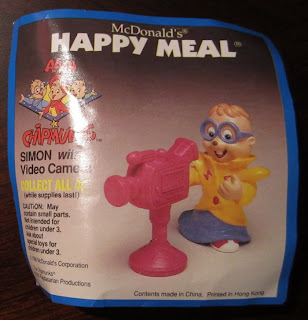 Here is the card that came with Simon. I really loved the paper cards that came with older Happy Meal toys. For junky gals like me who love packaging as much as the toy it is a nice additional piece. 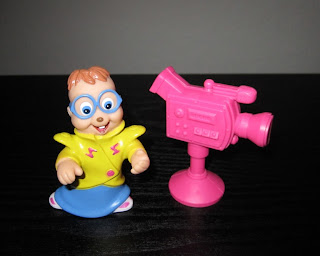 So here is Simon. Each figure was a soft rubbery pvc and along with their usual sweater outfit, the figures also had some outrageous looking extra piece. Simon had a very interesting yellow jacket on. He was my second favorite Chipmunk. I loved his nerdy side and the glasses.
Theodore with Rap Machine 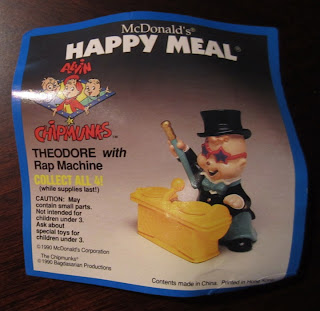 So Theodore came with a rap machine. And a really cute tuxedo. 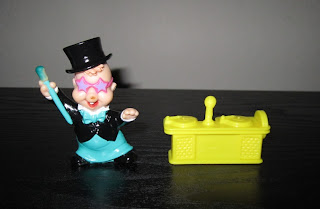 The star glasses really let everyone know that Theodore was truly the hidden star of Alvin and the Chipmunks. Theodore was my favorite Chipmunk. I thought he was just the cutest. And as a fellow lover of food, I just feel that Theodore and I would be the best of friends in real life. If I ever wanted to be friends with a talking chipmunk.
Brittany with Juke Box 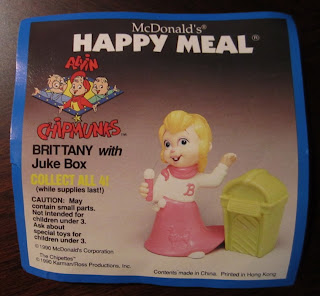 And here we have Brittany, the only Chipette that made it into the Happy Meal line. I personally would have loved to see the rest of the Chipettes getting their chance at figure form too! 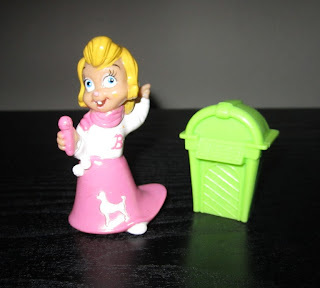 Brittany was one of my favorite Chipettes. Actually all three Chipettes were my favorite, because I just thought they were the coolest. I mean as a dorkette, I totally realize that I am biased in my attitude towards the Chipettes, but they were just fantastic! They always seemed slightly more independent and interested compared to the Chipmunks. There guardian was kinda cruel and I always seem to remember them living on their own. I just have a lot of fond memories of that show and am glad to have these old toys. 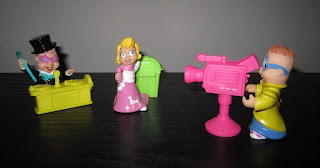 All together now, this was one of the last times that the Chipmunks would show up in a McDonald's Happy Meal until the recent films. (I'm missing Alvin from this set.) As such these Happy Meal toys are hard to find in mint condition. They also kinda have a funny rubbery smell with age. But all in all, these are a really fun addition to a person's collection.

Did anyone else like the 80's cartoon? What about the Chipettes? There were other items released during the span of this cartoon that were really fun, but also kinda hard to find. Anyways, I hope this Toy Chest Tuesdays sees you all well. And remember, there are just a couple more Toy Chest Tuesdays before a brief break. Then the new year starts and there will be all kinds of good stuff ahead! (I hope.) Take care everyone!
Posted by Michael Lynn P. at 3:45 PM