Toy Chest Tuesday is all new! Are you ready? I mean are you ready? Ya know this election season has made me really hungry. And really, not just the election. I mean we are in November. In a few weeks it will be Thanksgiving which will mean a lot of eating. So I thought what better way to embrace Toy Chest Tuesday whole heartedly than by checking out a delicious treat from the toy past! Cherry Merry Muffin was Mattel's rebuttal to Hasbro's Strawberry Shortcake. I being hungry for all toys had no problem embracing Cherry Merry Muffin. Or rather her friend, Chocolottie. Let's look! 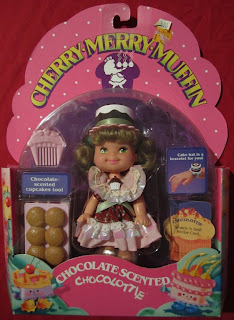 Out in the late 80's until the early 90's, Cherry Merry Muffin dolls were a little taller than Strawberry Shortcake and her friends. They also were not as wild as Strawberry Shortcake. Cherry Merry and her merry friends all had natural hair colors and clothes that were prairie food chic. Thankfully they were scented and although there were no colorful pets, each doll came with a sweet smelling tray of muffins, comb, scented recipe card, and a hat for the doll that doubled as a bracelet for you! Oh, and can I just say that the font for Chocolottie's name looks like it was written by a drunken fool or a serial killer? It just looks off. 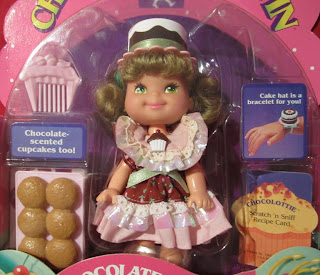 Anyways, here is a larger photo of Chocolottie. Her dress had cool chocolate accents and some fun shimmer sheen. I remember getting my first Chocolottie like it was yesterday. I was like 7 or so when these came out, and my best friend Kay-Kay and I loved to collect all the cute stuff. We were always talking toy talk and up to date on everything. So we both saved up our money to purchase our own Cherry Merry Muffin dolls. I was so excited. I don't know about you all, but when a toy line comes out like Cherry Merry Muffin, I tend to buy the doll that closely resembles me. So Chocolottie was the best doll that contained my features. I was a brunette (barring those few years in the late 90's and early 00's.) Our eyes were close to the same color. And we both smelled like chocolate. I mean this doll was practically me! Kay-Kay had gorgeous blond hair so she ended up with Cherry Merry and that was that! We got our CMM dolls and then we ended up at Burger King for lunch. After that I went home and watched Indiana Jones and the Temple of Doom on VHS. I totally remember this like it was yesterday. It was such a great day. 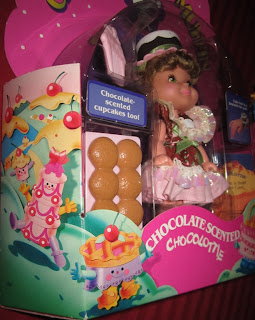 Let's also look at the side of packaging. Yummy treats with smiley faces jump up and down in a land made up of food. How good does that all look? I want to just have all these desserts in front of me.
Although here is the problem with putting faces and personalities on food. It becomes creepy, you know what I mean? Like who wants to eat the towering cake that has arms and legs? It is creepy. I used to feel bad for eating my McDonald's french fries. (I grew up with the Funny Fry Friends.) I'd eat them and be like, "They must be so terrified to find out who will be next in my grasp." I've since gotten over this hang up. 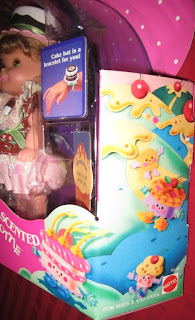 Here is the opposite side of the package. Similar dessert creatures bound all over the place in a land made of sweet treats. I don't know if it really shows in these pictures, but this doll's packaging was big. I mean it was very tall and wide. In our current economic toy times, toy companies would have shrunk the packaging size for sure. 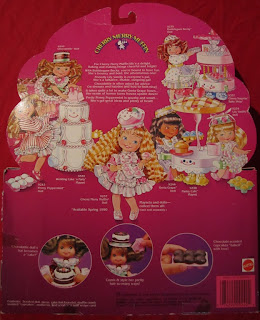 The back of the card was pretty basic. There was a small bio about Cherry Merry Muffin, some drawings of the other dolls for purchase, and three brief photos depicting the awesomeness of Chocolottie. 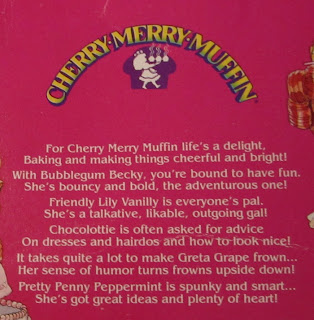 The bio is super fun. Each character is given a little rhyme to explain their personality. I like how the only character that has anything to do with baking is Cherry Merry Muffin. The rest of the characters must do baking as a side thing. But check out these bios, they contain similar traits that have followed along many other doll lines. I must say though, the original Strawberry Shortcake dolls really did a good job of showcasing a wide range of personalities (plus they had old cranky people for villains.) It is all just fun to look at all these details in a toy line. I'm not alone in this, am I? 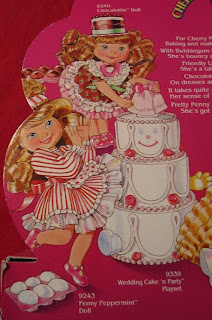 Ok here we have the dolls themselves. Each doll maintains the same theme that the dolls had throughout this line. There were also some play sets added too, though the play sets had far more going on than what was shown in the drawings. (As seen with the Wedding Cake 'n Party play set.) Chocolottie and Penny Peppermint are in this image. 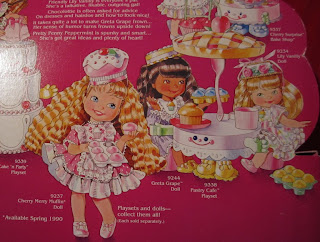 Here is Cherry Merry Muffin herself, with crimped hair and a lot of pink. I had wanted a Cherry Merry, but I just couldn't escape my own issues with wanting Chocolottie. Greta Grape was the only doll of color in the line. I wish there had been more ethnicities represented in this line and other doll lines too. Ever since I saw Rainbow Brite as a kid, I always wanted multiple races to get representation in a toy/doll line. Another play set is also shown (Fancy Cake) and there is another CMM doll with what has got to be the most interesting name for a doll ever: Lily Vanilly. It doesn't get much more late 80's/early 90's than that. 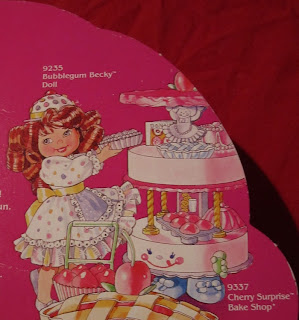 Rounding out the rest of the lineup was the Cherry Surprise Bake Shop and Bubblegum Becky. There were also other lines and versions of these dolls too. Like the Strawberry Shortcake line, Cherry Merry had play sets, small pvc figures, and everything had sweet smells! The line actually lasted for a good number of years and even had somewhat of a spin off with Mattel's Peppermint Rose dolls. As for any future plans of Cherry Merry Muffin, I am not sure that Mattel will be baking up any new dolls. Though for awhile Mattel did have a Cherry Merry Muffin website online that featured recipes for baking. So who do you vote for? Strawberry Shortcake or Cherry Merry Muffin? I love them both, but Cherry Merry Muffin does hold a special place in my heart. More on that later though.

This final picture also showed off what was so cool about Chocolottie. The cake hat, brushable hair, and a tray of yummy smelling muffins. Oh goodness I loved that tray of muffins. I wish I had my original doll, but I believe I had actually donated her. Right before I became a teen, I went through this brief phase where I was like, "I've got to get rid of this stuff! I need to get interested in lip gloss and dating!" So I ended up donating a few things before quickly coming to my senses. I could have my lip gloss and toys too! (I'm a mess. Really.)
So I was really excited when I came across this Chocolottie on eBay about a year ago. They normally go for ridiculous amounts on the secondary market, but I managed to purchase this one for like $14.00, which was a huge surprise to me. And that just shows how some things get marked up badly. Anyways, after I purchased this it made me want to see how my old friend Kay-Kay was doing. I mean I hadn't spoken to her in years, but I never forgot our experience getting our Cherry Merry Muffin dolls. I mean she was my best friend when I was little. So I wanted to find her and just see how she was doing after all the time that had passed. Well sadly, my investigating found out that she had actually died a few years ago. I mean it is crazy how things can change. I wish I had gotten in touch with her sooner. It is just so weird how people grow up and friendships fade away, but there are so many wonderful memories that remain. I will forever remember her and in a way this post is for her. Ya know people sometimes think that collecting toys is silly and there is confusion about why a grown person would want to collect these trivial items. But there are many reasons why people collect. And that makes this Cherry Merry Muffin doll just that much more important to me. So enjoy this latest edition of Toy Chest Tuesday! Let me know your thoughts on Cherry Merry Muffin! I also hope you are all doing well. Until next time!
Posted by Michael Lynn P. at 3:18 PM