As the month of June comes to a close, let us celebrate an all new Woman of Wonderosity!

Miss M: April? How are you feeling?
April: How long have I been in here?
Miss M: This is only your second day in the hospital.
April: Crap. I'm going stir crazy. Who decorated this place? This doesn't even look like a hospital. Why is Superman still here?
Superman: Hi. I was just coming in for some test results. I also wanted to check in to see how you were both faring.
April: I'm faring just fine. 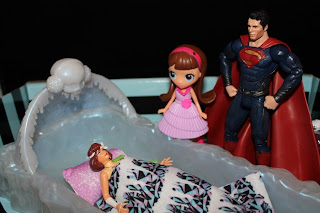 Miss M: Well I think it is very nice of Superman to visit us again, right April?
April: Right... Listen, I get you are this Man of Steel type guy, but we're fine. Isn't there some crisis you can go and avert?
Superman: I suppose so. Take care ladies. (Superman leaves the room.)
April: Finally. I thought he'd never leave.
Miss M: Oh stop! I think it is nice that he visited. I wonder if he has a crush on me...
April: Stop being pathetic. The man is with Wonder Woman. Besides, who wants to be with a man who has clenched fist issues? You're better than Clenched Fist Disorder M.
Miss M: I guess. He fills that suit out so nicely though...
April: He is also overexposed in razor blade and shaving cream ads too, drop it. Trust me, there are better men out there to fawn over.
Miss M: Maybe you are right.
April: We need to talk. The month is nearly over and we still need to get to the Woman of Wonderosity...
Miss M: Oh yeah, about that...
April: Wait, stop talking. Do you hear that?
Miss M: No, I don't think so.
April: I distinctly hear... shit! It can't be! What is she doing in here?
(The hospital room gets an unlikely visitor, Jessica Wray a nosey rival reporter!)
Jessica: Oh April, you're alive!
April: Of course I'm alive. 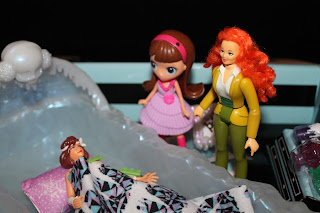 Jessica: I saw the wreckage. It is amazing that you survived. In fact, Channel 3 is the only news station covering your accident. I've been assigned to the exclusive story.
April: I bet you have.
Jessica: It's a shame, I figured your accident would be on other news outlets...
April: I am the face of Channel 6 news, they are reporting on bigger issues.
Jessica: What's bigger than April O'Neil involving herself in a strange car accident in the middle of the night? Everyone is talking about it. Rumors are swirling that you were under the influence. Other people are whispering that Janine Melnitz tried to drive you off the road in a fit of road rage. Can you comment on anything?
April: Yes I can comment. Buzz off! Take your ratty hair and go bother someone else!
Miss M: I'll handle this April. (Miss M ushers Jessica out of the room.)
Jessica: People want to know April! You can't keep the truth a secret forever!
April: Go copy another show! (Miss M returns alone.)
Miss M: She's gone.
April: Good. Now where were we?
Miss M: The June 2013 Woman of Wonderosity.
April: Ah yes. Alright, what have we got? Can you fit an interview in before the month ends?
Miss M: I'm not sure. You see April, I was planning on you being the June 2013 Woman of Wonderosity...
April: Really? Me? Wow. I'm just speechless Miss M.
Miss M: Well, I'm not really sure how we are going to do this though. You are in the hospital.
April: Grab a recorder and get this interview started!
June 2013 Woman of Wonderosity 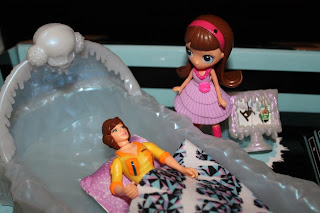 April: I miss being young. True, I may not have had the best hair or clothes, but I did love being young.
Miss M: Is that where you want to start?
April: Of course. It's all we seem to be these days: obsessed with our youth. Why not start from the beginning? I'd give nothing more than to be young and starting out all over.
Miss M: But why? You've accomplished so much as a reporter. You'd go through all that stress and drama, only to be young again?
April: Yes. Yes I would. And not just for the supple skin you could once bounce a nickle off of. I'd want to be young so that I could meet them all over again.
Miss M: Are you referring to the Turtles?
April: What do you think? Where would I be if not for them? They were the story of a lifetime. How many times do we say that about something? 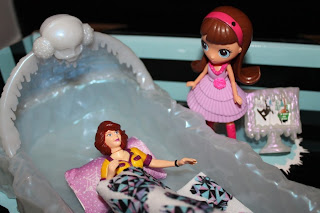 Miss M: Quite a lot actually.
April: I know. We can't help all the things we find ourselves attached to. Do you think I'm going to be able to walk again?
Miss M: Seriously? Of course you will. That Dr. Brick didn't know what she was talking about. She was a real blockhead.
April: I remember when we first met, do you?
Miss M: It was a long time ago.
April: We met at a Toysrus, didn't we?
Miss M: I think so.
April: What were we doing there? That just seems so random.
Miss M: I've met a lot of folks there.
April: Yep. But ours is an interesting friendship huh?
Miss M: Yes. I would guess so. But I don't want to talk about that. Let's discuss your work. What's the scariest job assignment you ever had to go on?
April: Now that I've had to deal with the monster that is Pizzazz, I should say her. But even she can't grab that top spot. My scariest assignment was going undercover as a streetwalker to crack down on a prostitution ring under the forces of Shredder. 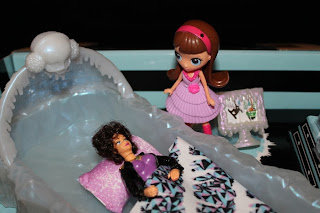 Miss M: I remember that!
April: Yeah. I had a cool outfit and everything. My hair had never been better. The crazy thing about that piece of undercover journalism was that Shredder wasn't even running a prostitution ring. He was trying to build up an army of killer female ninjas to go after Vanilla Ice.
Miss M: Oh wow. That sounds very complicated.
April: When are things not complicated with Shredder?
Miss M: Have there ever been any jobs you've regretted?
April: Ha! Of course there have! I went back in time once, and that was just a mess. 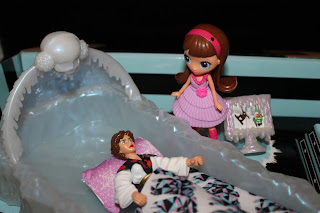 Miss M: What's so wrong with time travel?
April: It is almost always messy and confusing. And who really cares? It doesn't change anything. I'm still going to grow old and my memories and experiences will one day cease to exist. What does it matter if it occurs in the present or in feudal Japan. Know what I mean?
Miss M: I guess so. What would you be doing if you weren't a reporter?
April: I'm not sure. I've always wondered what it'd be like to work with computers. Maybe computer programming. I don't know. 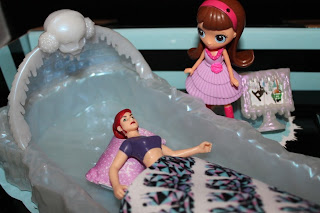 Miss M: April, there are so many things you could still do with your life. Don't feel like it is all over because you are no longer young. Who cares who plays you in a movie or that you weren't allowed to come back to television as a more mature April.
April: Actually, the truth is I may have gotten belligerent with the studio when they told me they were casting me as a teen... I was almost close to inking a deal to play myself as a teen. I had to go and ruin it though. Never drink a fifth of scotch before a job interview.
Miss M: How would you playing yourself as a teen worked?
April: I don't know. They have so many camera tricks these days, there is no telling. It could have worked. There's tape. They could have taped the sides of my face up or something. Or just inject me with a lethal dose of Botox sure enough to make me look 16 again. 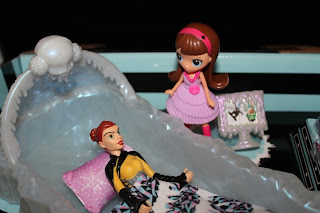 Miss M: Are there any personal regrets about your life?
April: Maybe some, but none I care to talk about.
Miss M: Oh no fair. You'd want me to answer that question. You have to answer it too.
April: Seriously M? Your regrets are silly, like that you missed out on buying a toy in 1987 or something. My shit is real and serious.
Miss M: So then speak your mind. What do you regret?
April: Oh hell. I regret that Casey Jones and I couldn't make it work. I loved that man but we both let our egos get in the way.
Miss M: Maybe there is still some hope for you two?
April: I doubt it M. What does he want with me? We've both hurt each other too much.
Miss M: I don't believe that. You both always find a way back to each other.
April: Enough of that. What are we going to do about you?
Miss M: What about me?
April: Someone wants you dead M.
Miss M: I know. It's kinda freaking me out.
April: I know. Which is why we're switching things up. You are going on a special assignment next month. You do know what happens in July right?
Miss M: Oh yes! San Diego Comic Con! Are you trying to tell me that I'm going to go there?
April: No. Like I'd ever give you that reporting assignment.
Miss M: Oh.
April: No, you are going to another event that occurs the same weekend as SDCC. I've got you a ticket to the Conference of Evil.
Miss M: Wait a minute. Let me get this straight. A potentially villainous person(s) wants me dead, and you are sending me on a reporting assignment to the Conference of Evil?
April: Yes. Look M, don't be worried. This is the perfect opportunity for you to find out who is trying to kill you. All you have to do is pretend to be there interviewing a host of Bodacious Baddies until you can narrow down the ones responsible for planning your demise.
Miss M: This sounds completely stupid.
April: So stupid, that it is bound to work!
Miss M: Great.
April: You'll do fine M. I believe in you. Now hurry along, I am very tired. This old bag of bones needs some rest.
Miss M: April, you are hardly an old bag of bones.
April: Take care M. (Miss M nods and gives one last look to her friend before leaving for the day.)
Miss M: April O'Neil, you are my friend. And no matter how young or old you get, you are always going to hold a place in my life. Goodnight.
April: (Laying there with her eyes to the sky, wondering about so much in her life, April whispers...) Goodnight M. 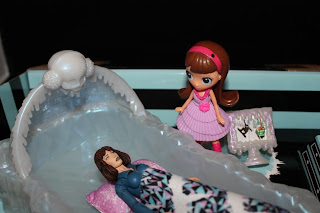