The Photos of Grayskull Warrior!

Ok everybody, it isn't exactly breaking news that I am obsessed with She-Ra. I have been since I was little. She represented everything to me. She was kind and caring full of strength and beauty. She was the hero, a reason to believe that anything in life was possible, that I didn't have to tie myself to train tracks or trees in the hopes that my prince would swoop in and rescue me. I could rescue myself.

One of the things I have enjoyed since the advent of the Internet is that I have been able to read about and even get to know other fans who are just as obsessed with She-Ra and He-Man. Every She-Ra fan has their own way of honoring the coolness that is the Princess of Power. With places like He-Man.org, MattyCollector, FaceBook, Twitter, Flickr, Instagram, and on and on, there are many creative outlets for fans to share in their love for the most powerful woman in the universe.

I recently got a smart phone and since then I feel like I have unlocked secrets to the universe that everyone else already knew. Instagram has become one of my favorite places to stop in and visit. There are so many interesting and fun photos to peruse and like. Wonderful stories can be told with just a simple set of photos. I adore what Instagram is capable of.

While doing my searching, I came across a fellow POP fan by the name of GrayskullWarrior. His photos instantly drew me in and I spent hours pouring over all the great images of He-Man and She-Ra that he had posted. I also came across a series of images he took involving the vintage POP toy line with some added special effects.

After trading some comments, GrayskullWarrior mentioned that it would be perfectly fine to post his series of vintage POP toy photos on the Diary. I was more than happy to do so! Without taking up anymore time with typing, let's check out these awesome photos taken by GrayskullWarrior! 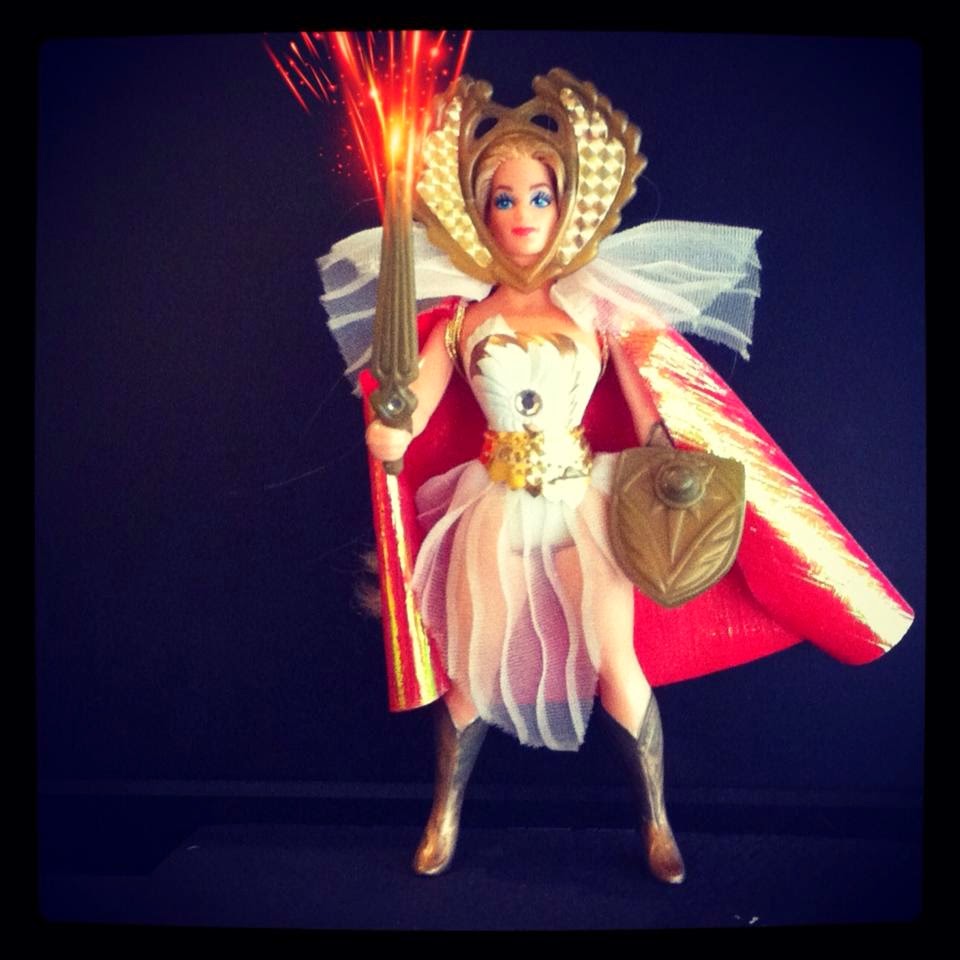 She-Ra
We'll start with She-Ra. This picture is so cool! I love how the effect on her sword really looks like the power of Grayskull is flickering off the blade. Also, pay attention to the way the toys look. GrayskullWarrior has taken some great care of these items! 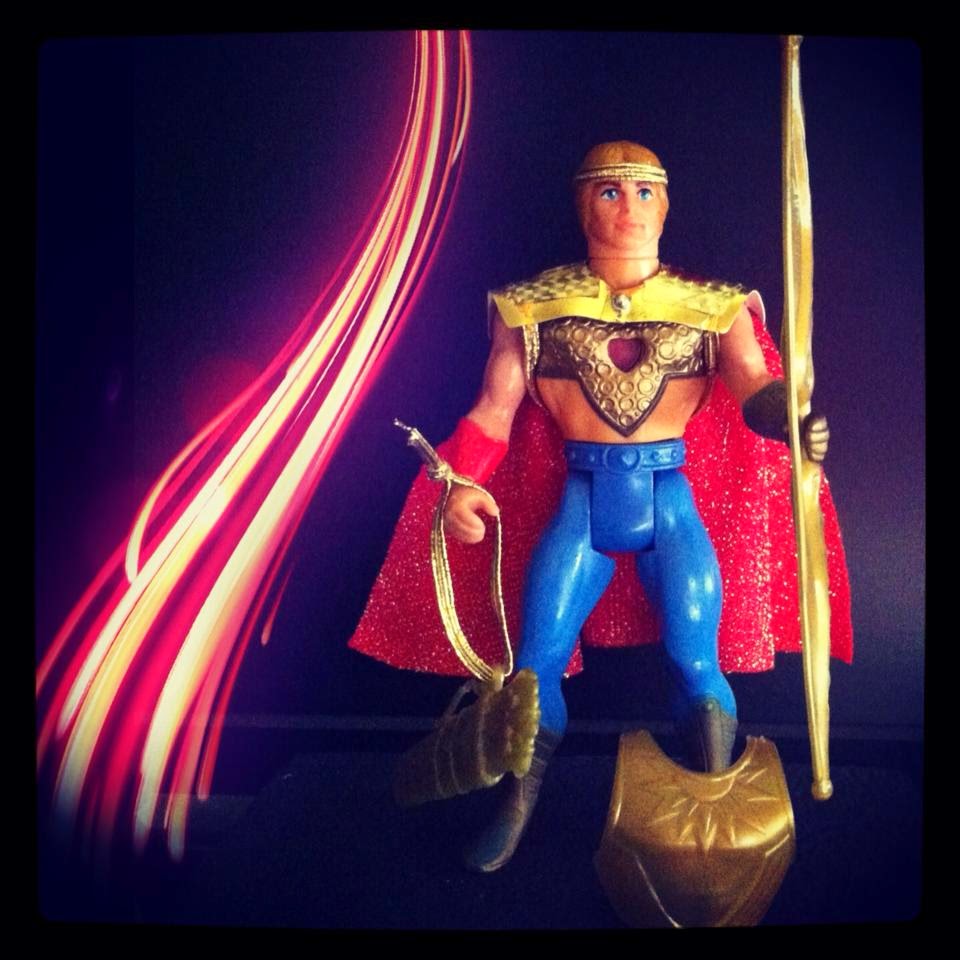 Bow
It's refreshing to see a put together vintage Bow. I have since lost some of the luster on the Bow I had growing up, but this picture really does justice to everyone's favorite archer. 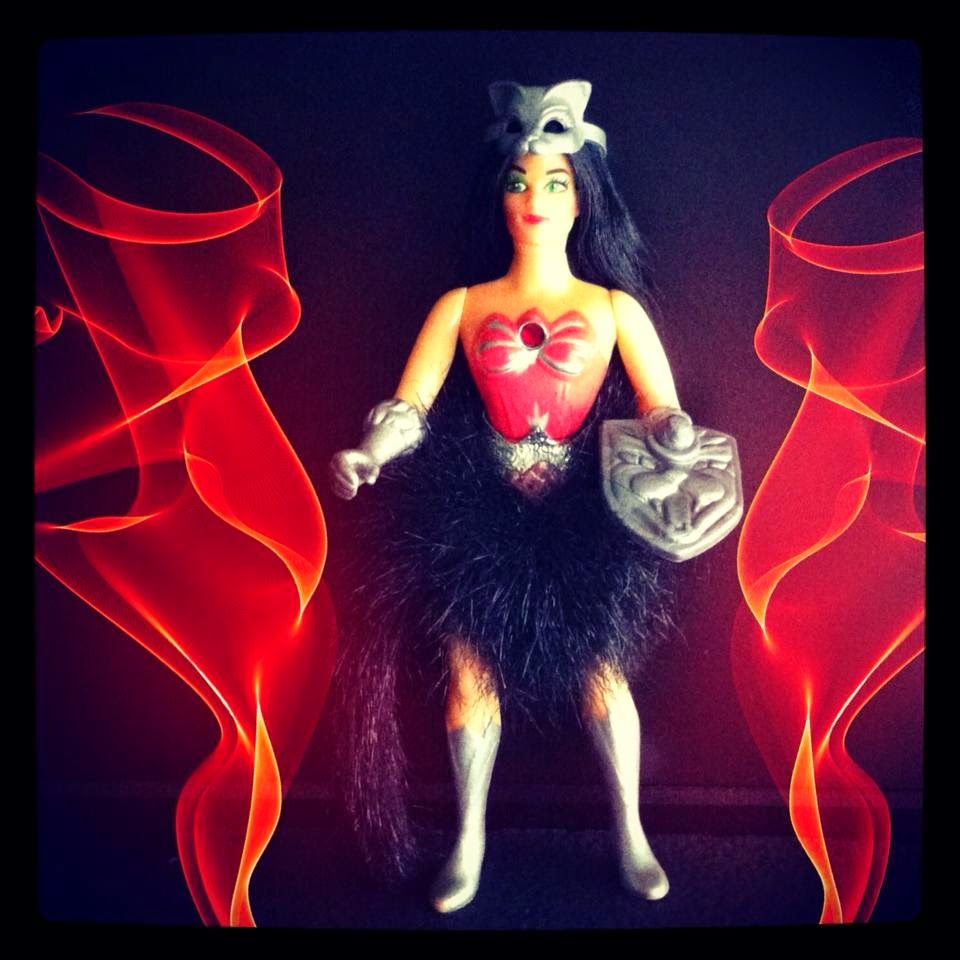 Catra
Meow! The whirling red special effects look menacing for this jealous beauty. They look almost like flames coming from the ground in the Fright Zone or something. 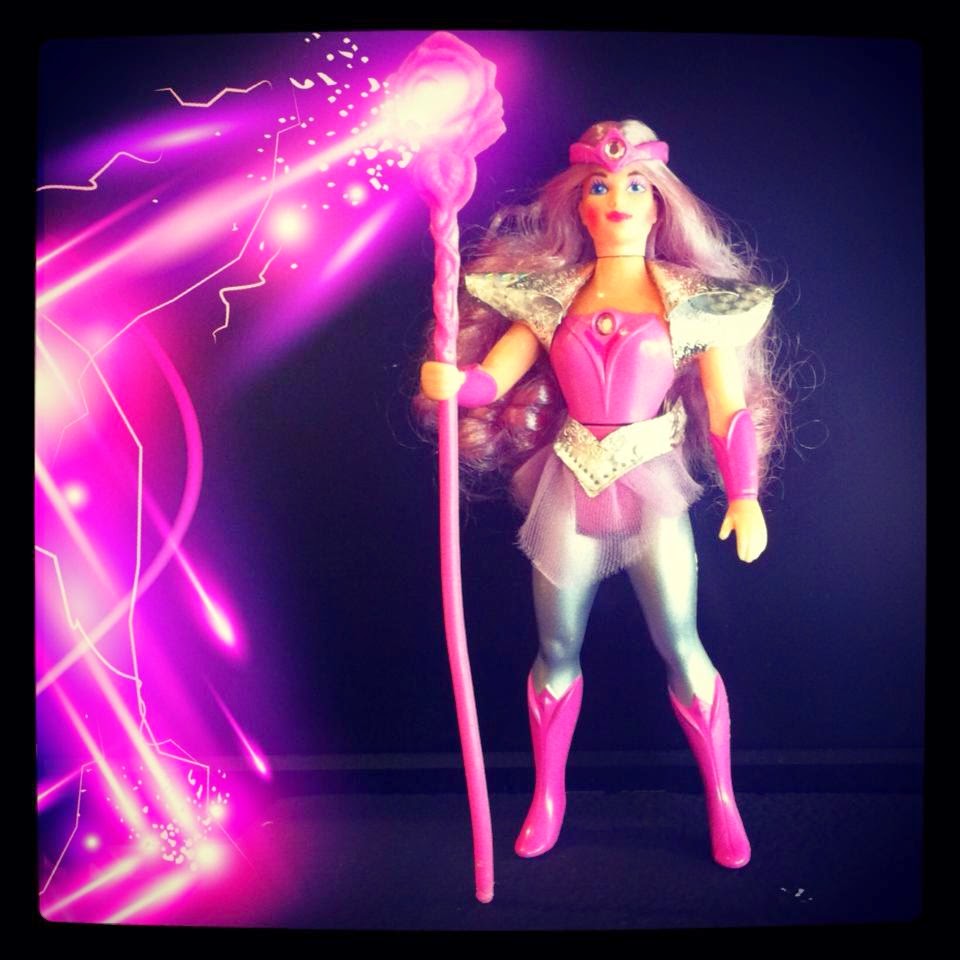 Glimmer
What can I say? This picture is everything and the kitchen sink. I can't even begin to express how utterly cool this picture of Glimmer is. She is doing more than just lighting the way. She is zapping off beams of light aimed at the enemies known as the vile Horde! 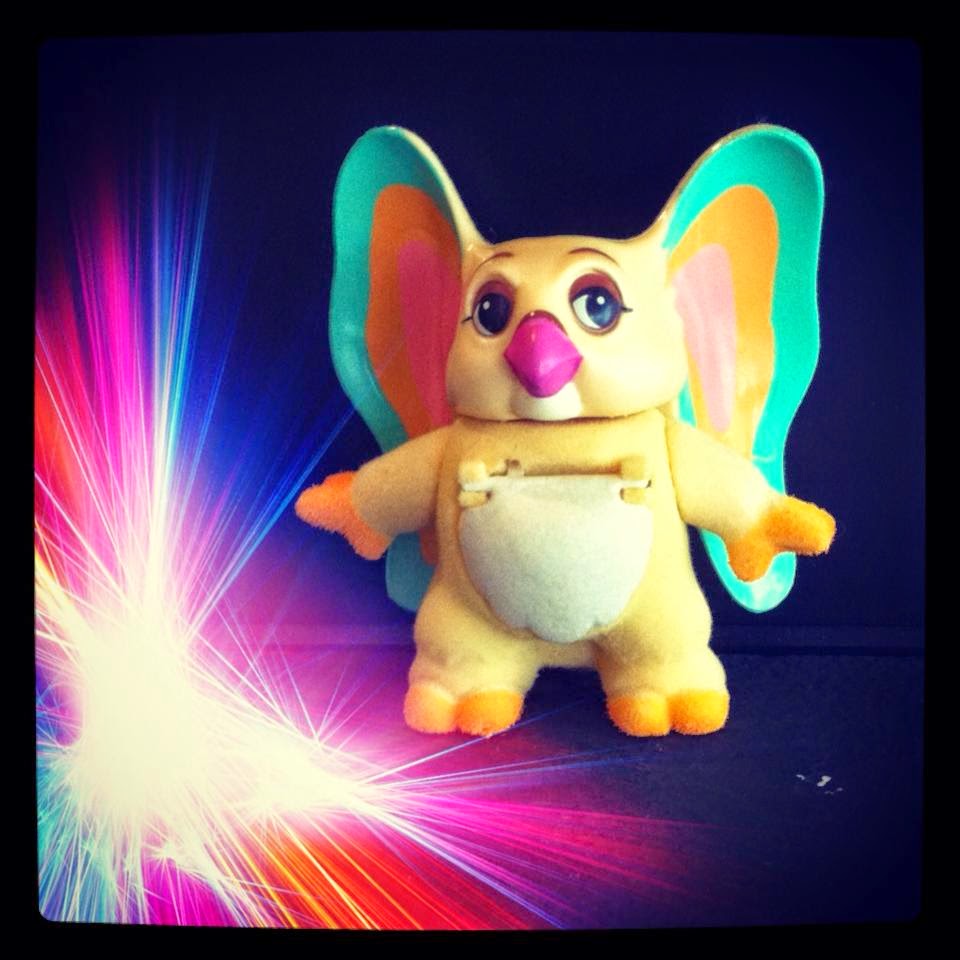 Kowl
He is a cute know-it-all owl, isn't he? The special effect next to him also has a Light Hope feel to it. It's so pretty! 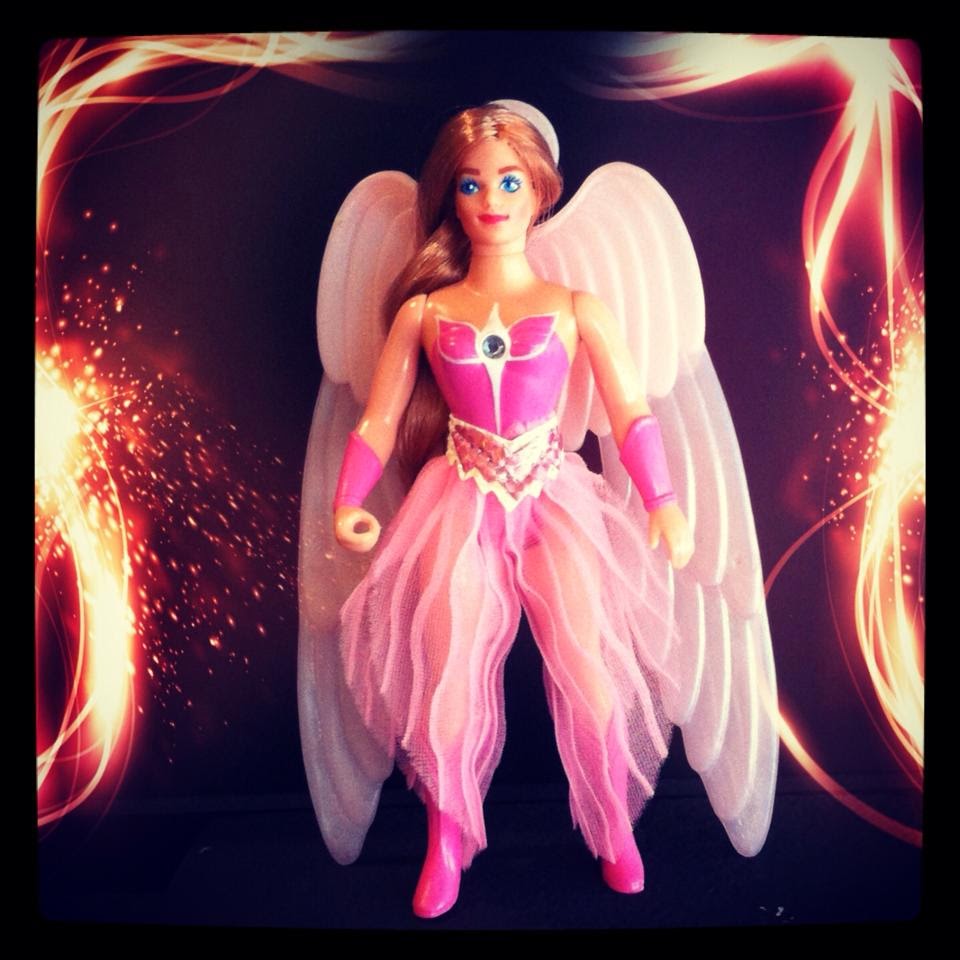 Angella
One of the more interesting toys from the line, Angella has a look that is drastically different from her cartoon version. The streams of energy around her seem to brighten her up, making her very angelic. 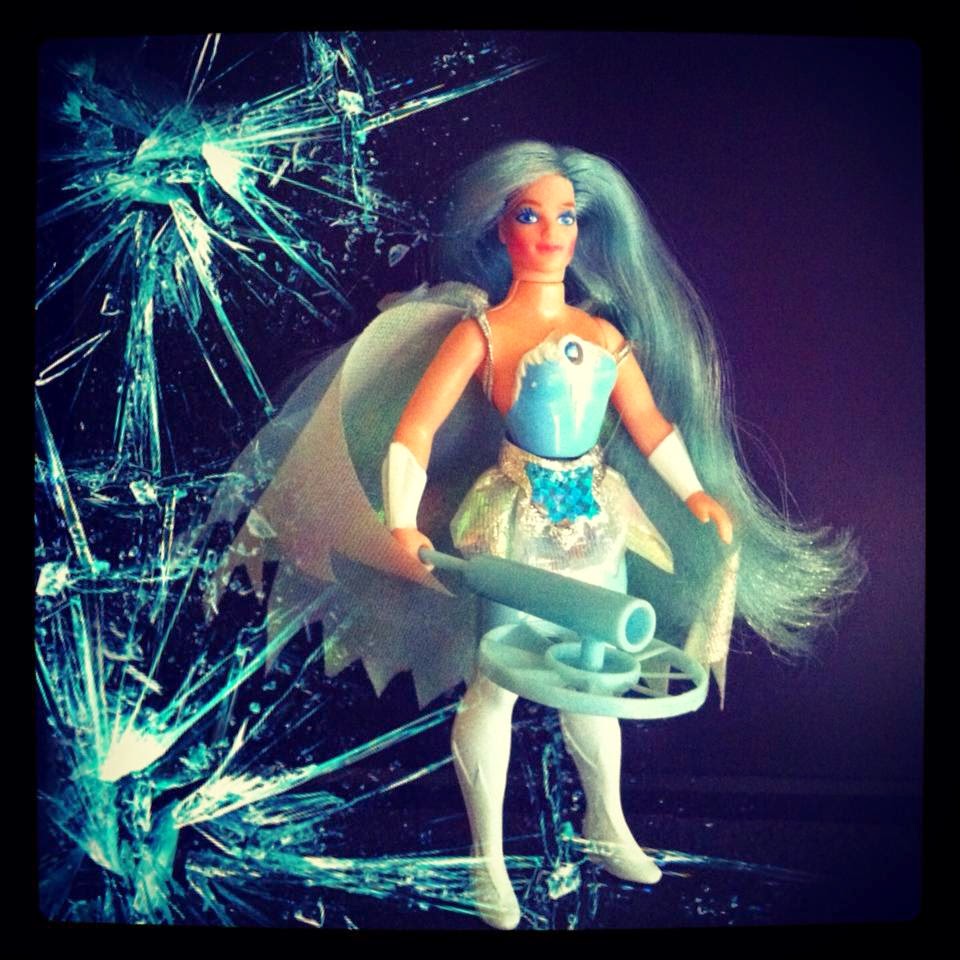 Frosta
The ice theme with this picture is cool. Literally! It's like shards of ice appear in her footsteps. I also like that in these photos, GrayskullWarrior added effects that really compliment these toys. 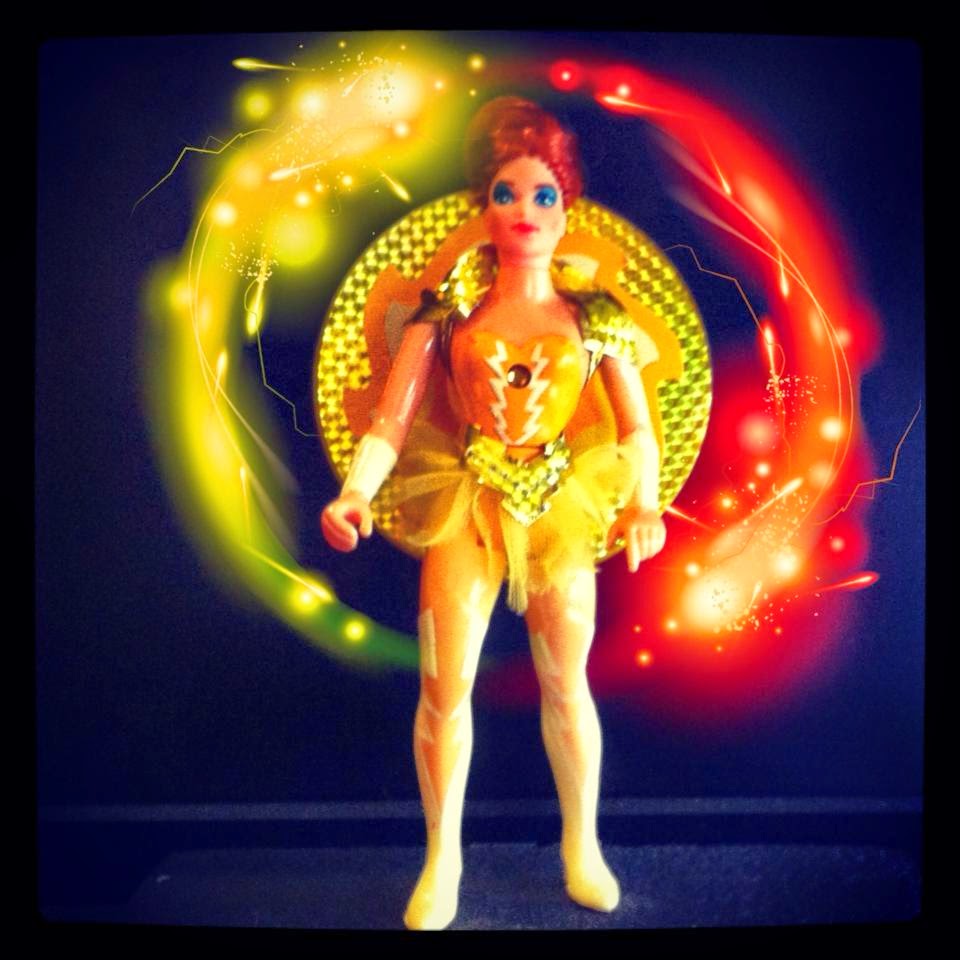 Castaspella
The ring of energy around her disc gives the whole thing an electric movement! I love this photo so much. I also like that this Castaspella has the variant boots! My vintage Casta has boots that are completely cream, while this Casta has the bolt strip fleshed out on her thigh high boots. Very cool. 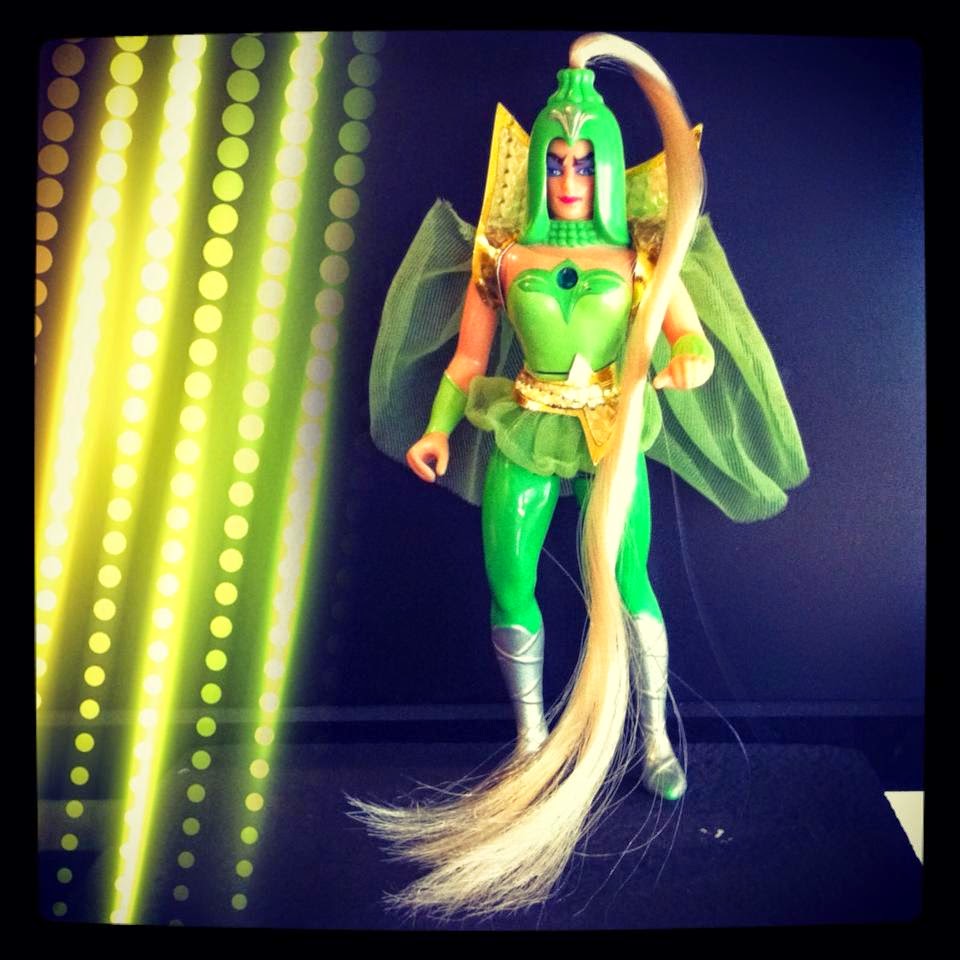 Double Trouble
The hair looks great on this Double Trouble. I also like that the special effect looks like shimmery beams of light trying to bring the spy out of the darkness! A very interesting figure, I look forward to the release of Double Trouble in the Masters of the Universe Classics line later this year. 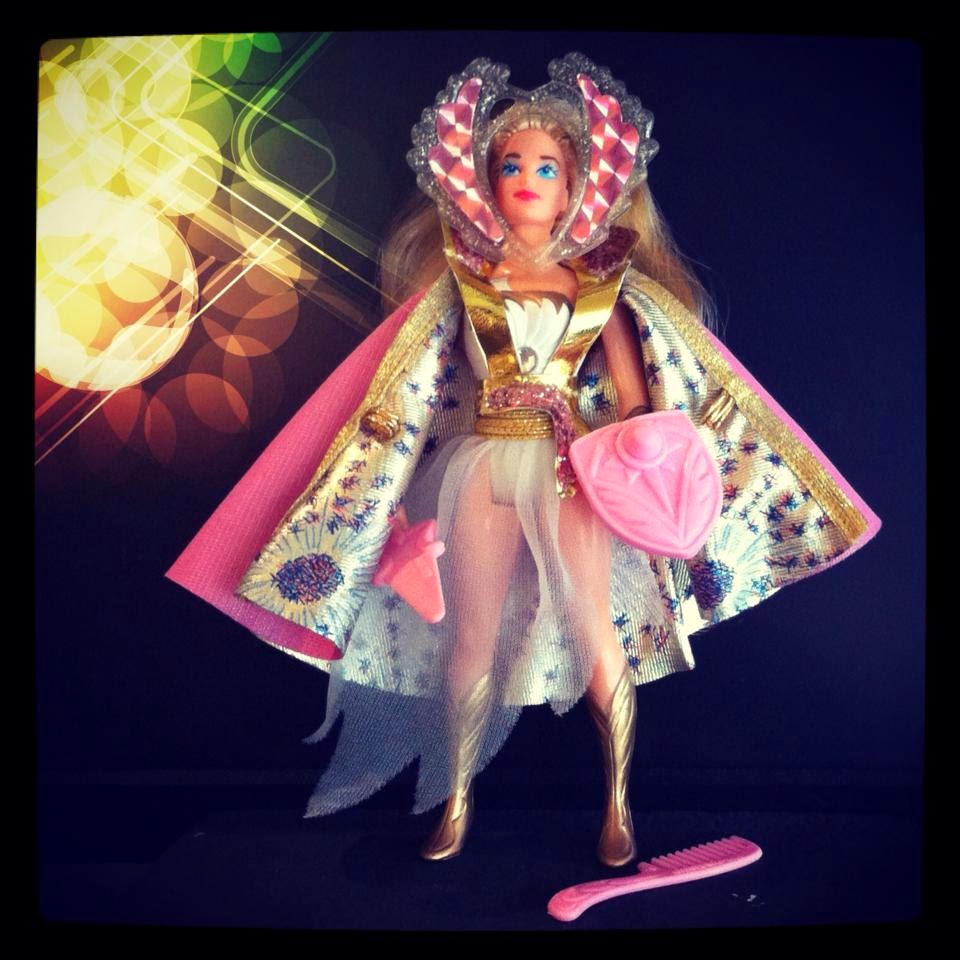 Starburst She-Ra
No she does not come with the yummy chewy candy, but this She-Ra variant did come with a colorful cape with a starburst effect. The dazzling light effect in the upper left corner also helps bring out the starry feel of this figure. 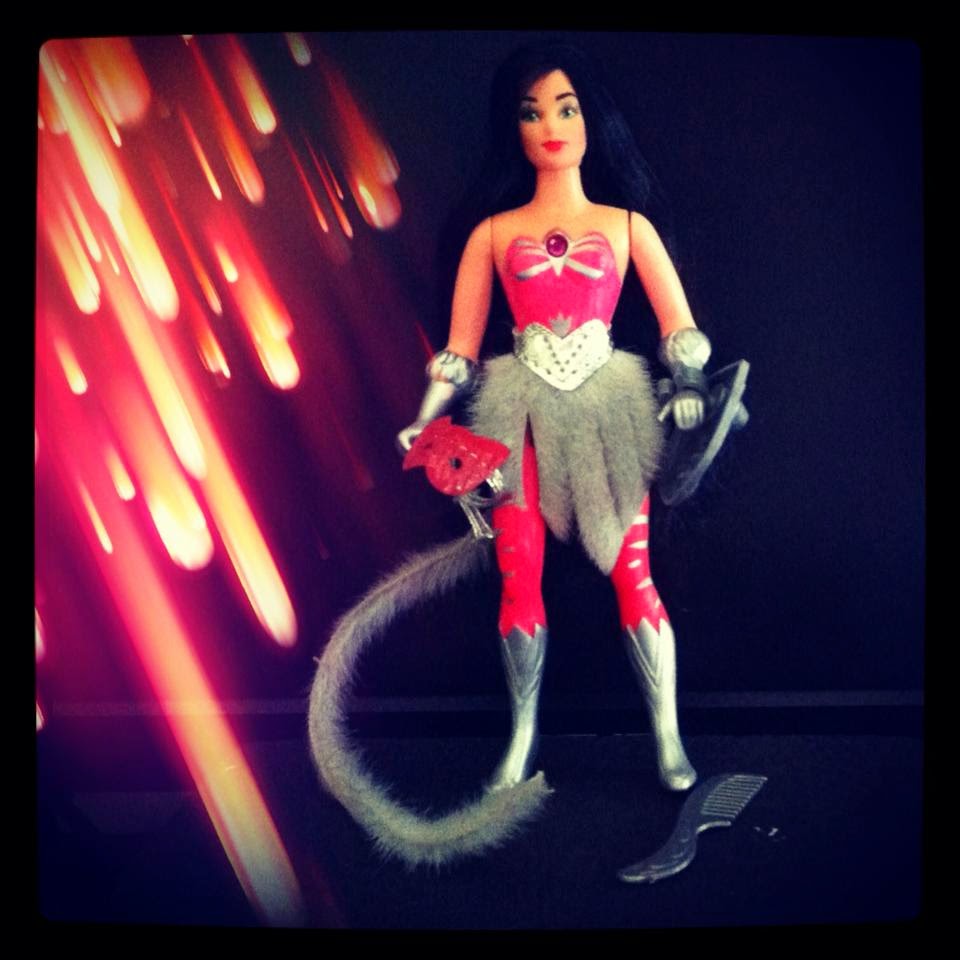 Scratchin' Sound Catra
Another variant, this version of Catra continued with a feline theme. The effect blends well of course, and I really like how her hair looks. All of the images here feature the POP toys with some pretty awesome hair. 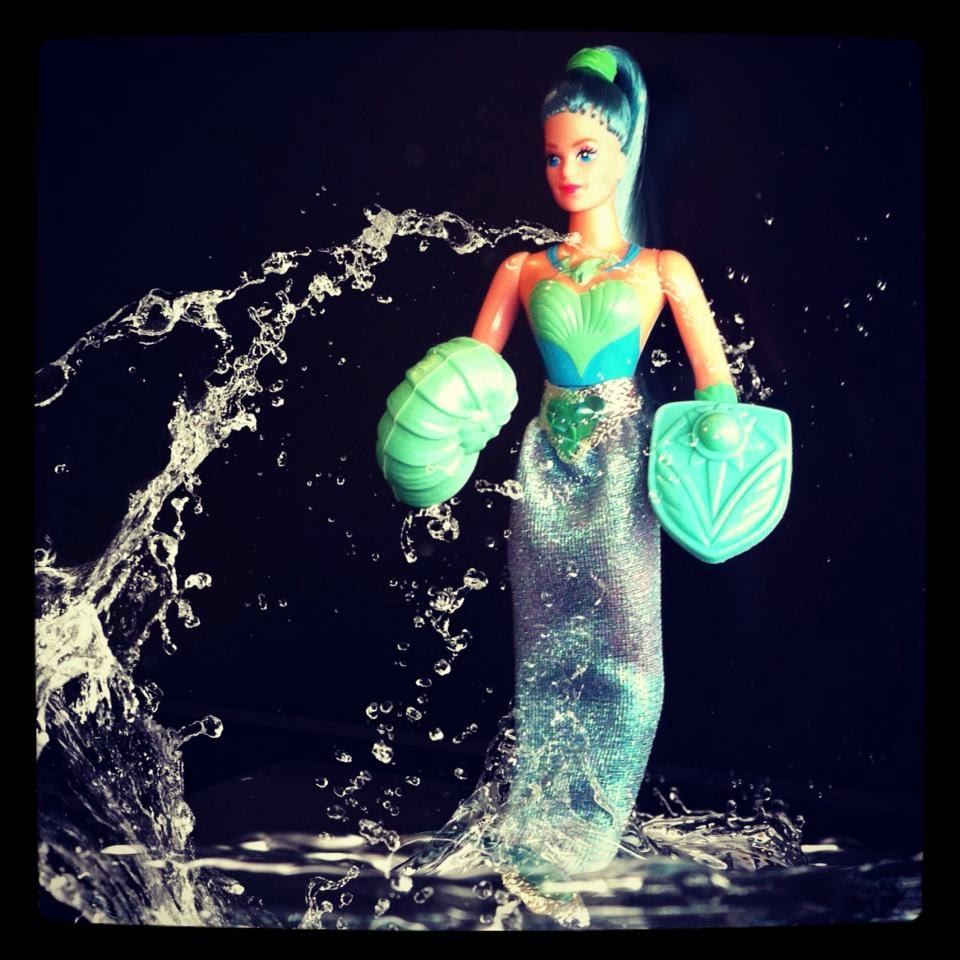 Mermista
My ultimate favorite She-Ra toy. I want this picture hung on a wall in my room. I think the effect and look of the figure is just everything. There is so much movement and grace. I can't get over this picture. I'm also loving her hair. My vintage Mermista has certainly had some twists and turns with her hair style, but this Mermista looks lovely. 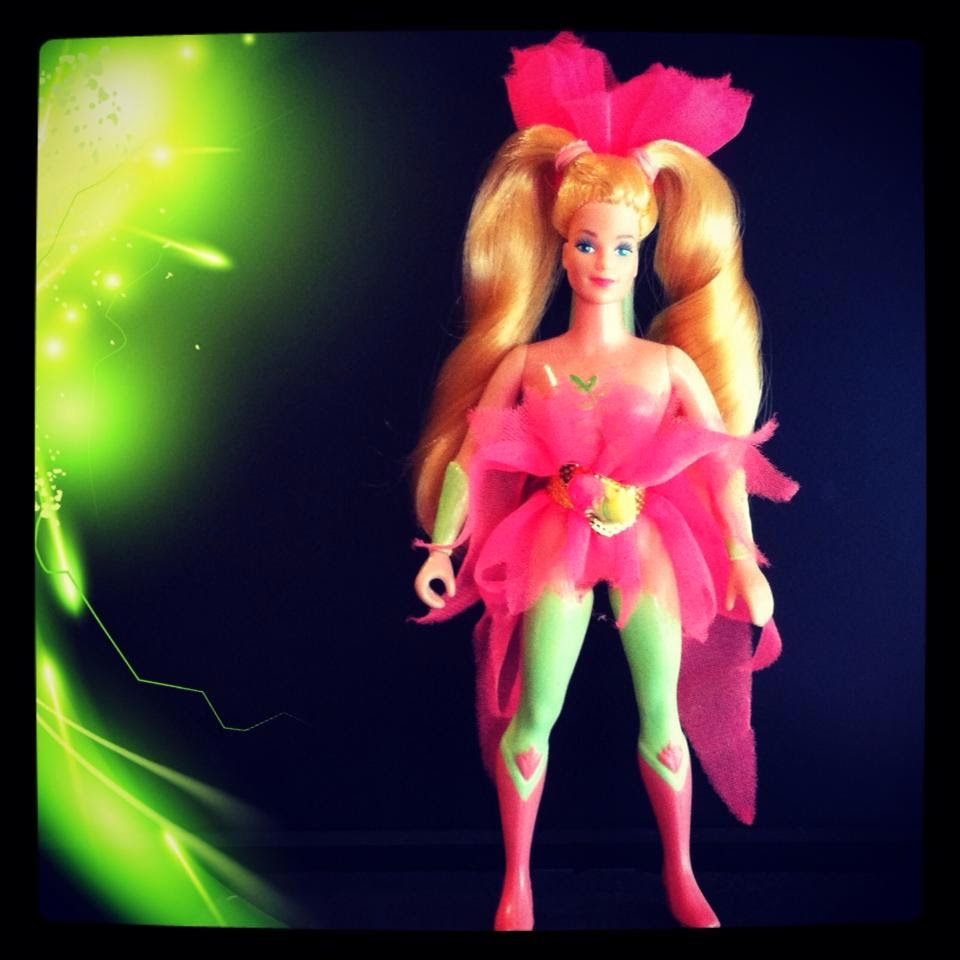 Perfuma
She's scent-sational! The green light effect looks like plant life. Just a stunning image. This is also my favorite version of Perfuma. Her skirt and blooming flower on her back look very pretty. 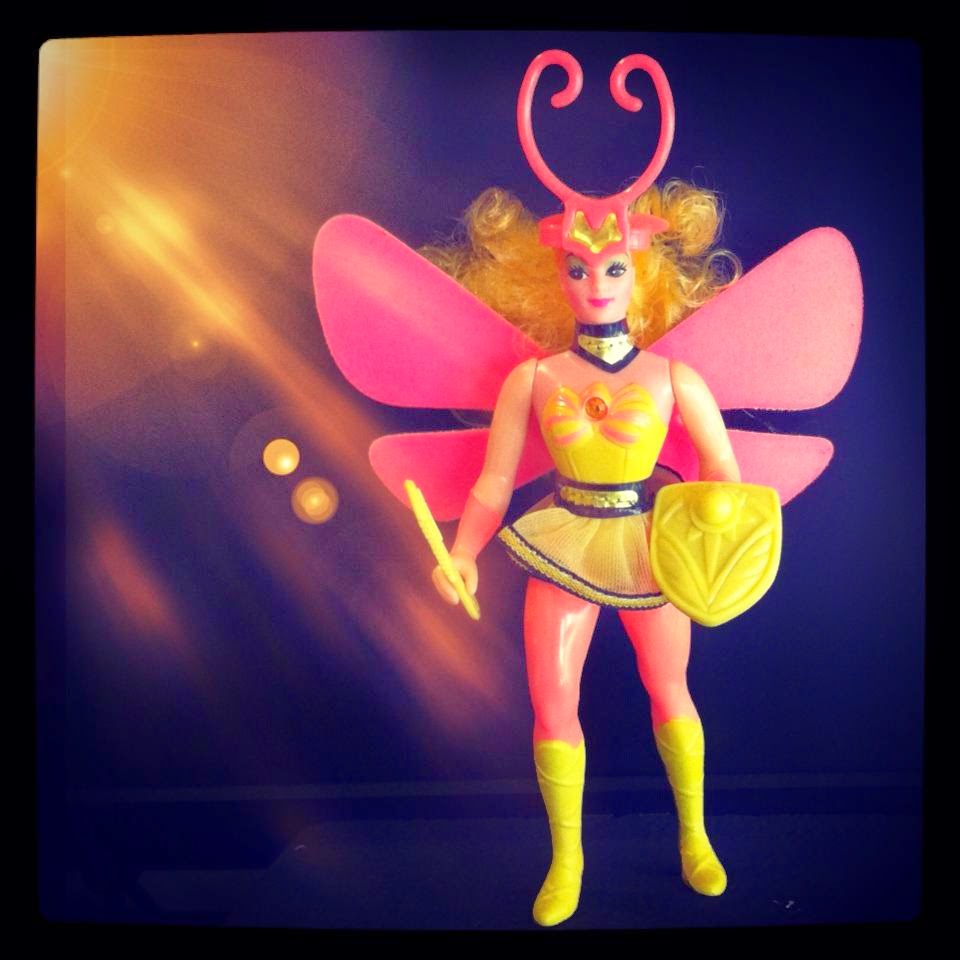 Sweet Bee
From space pilot to He-Man's crush (and Frosta's sudden rival) Sweet Bee was a real honey. This photo is bright and shiny. I almost expect her to buzz around in the air. 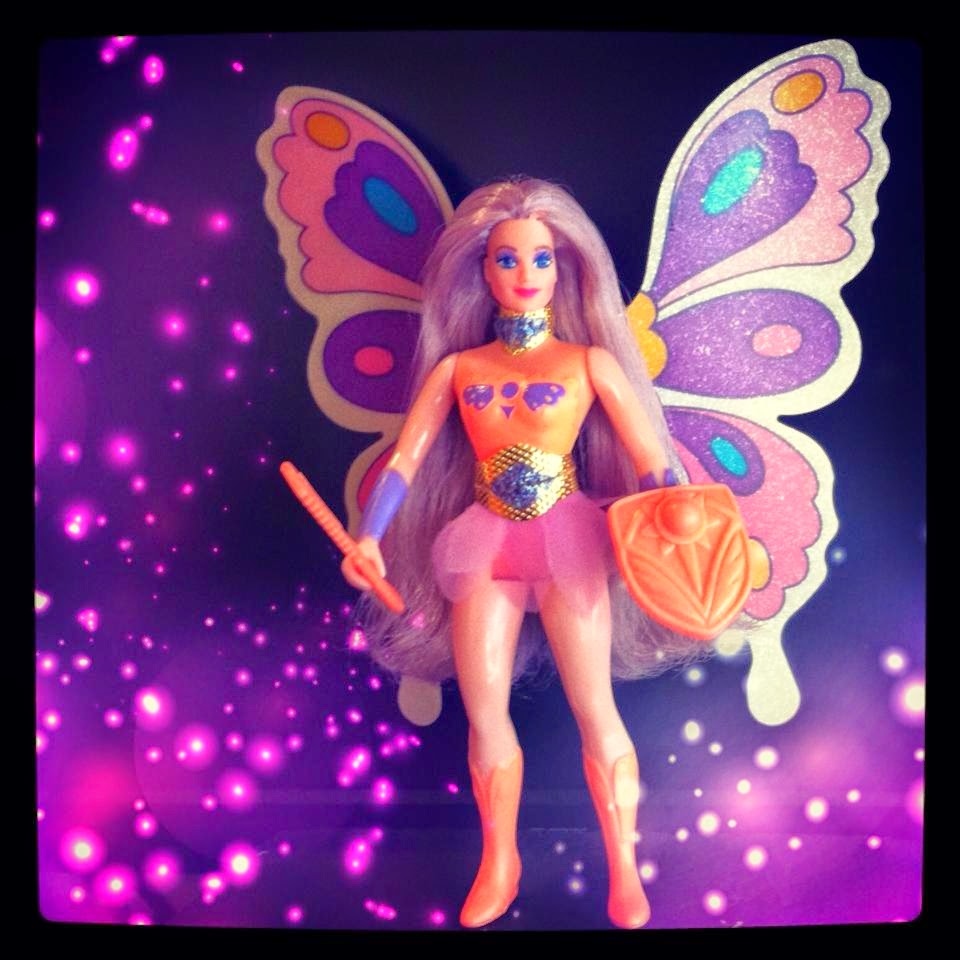 Flutterina
Speaking of flying in the air, check out Flutterina! The purple special effect looks like glittery pollen. These photos are just magical. They all look like the figures are ready to begin their fight for the Great Rebellion. 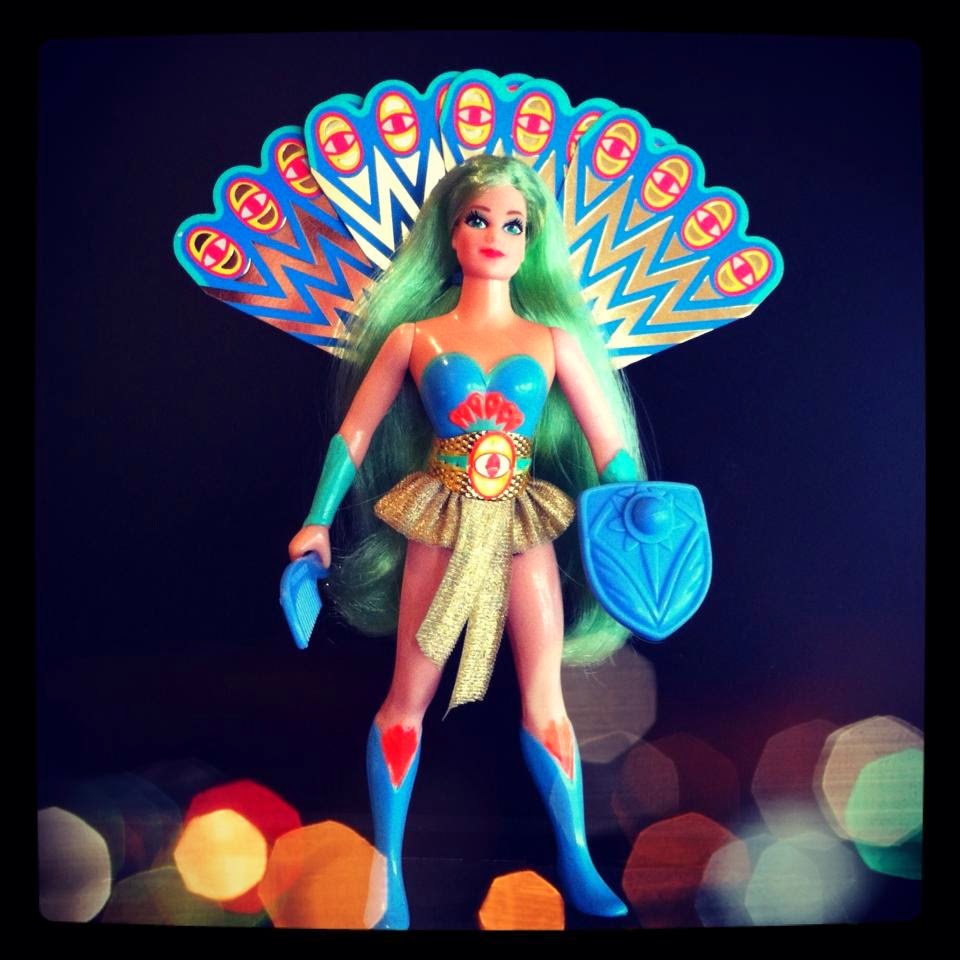 Peekablue
A subdued image, the special effect is sparkling at the bottom, while Peekablue's glorious feathers do all the work. She is another figure I am looking forward to in the MOTUC line. 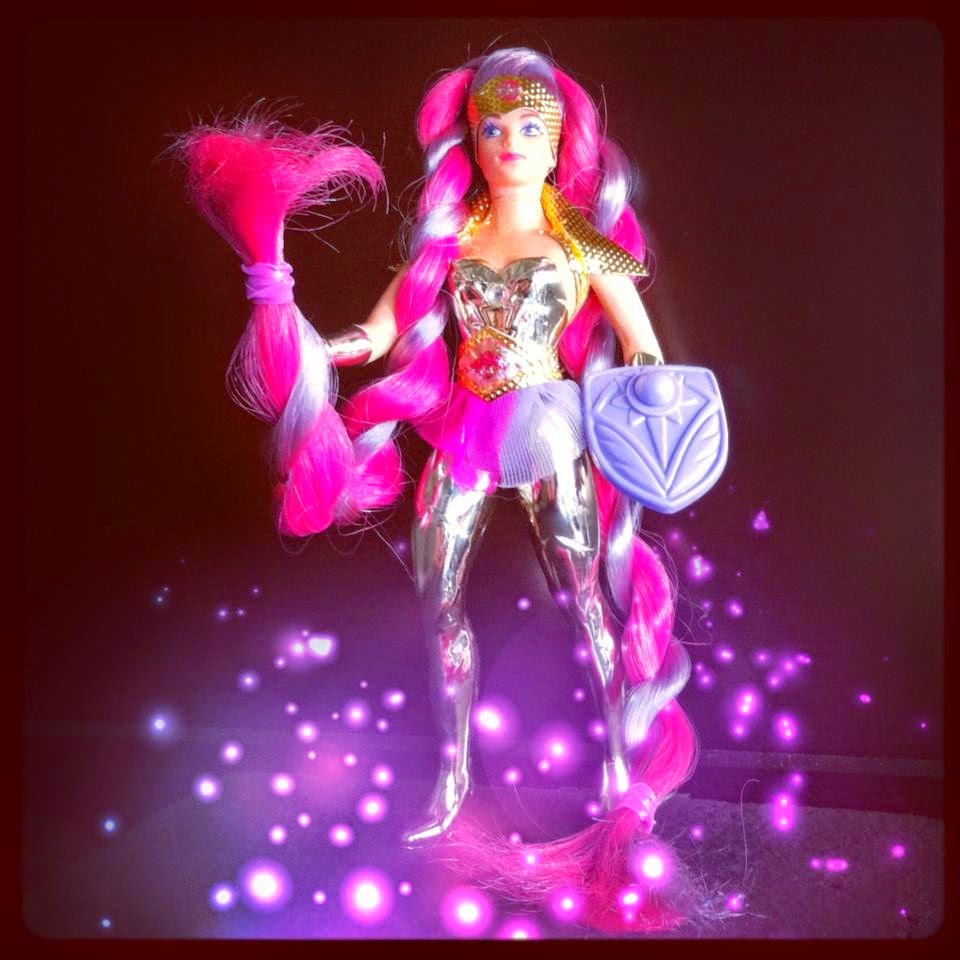 Entrapta
She looks fresh from a teleport from the Fright Zone and into the Whispering Woods. This is how a villain should look: drenched in gold with killer hair. 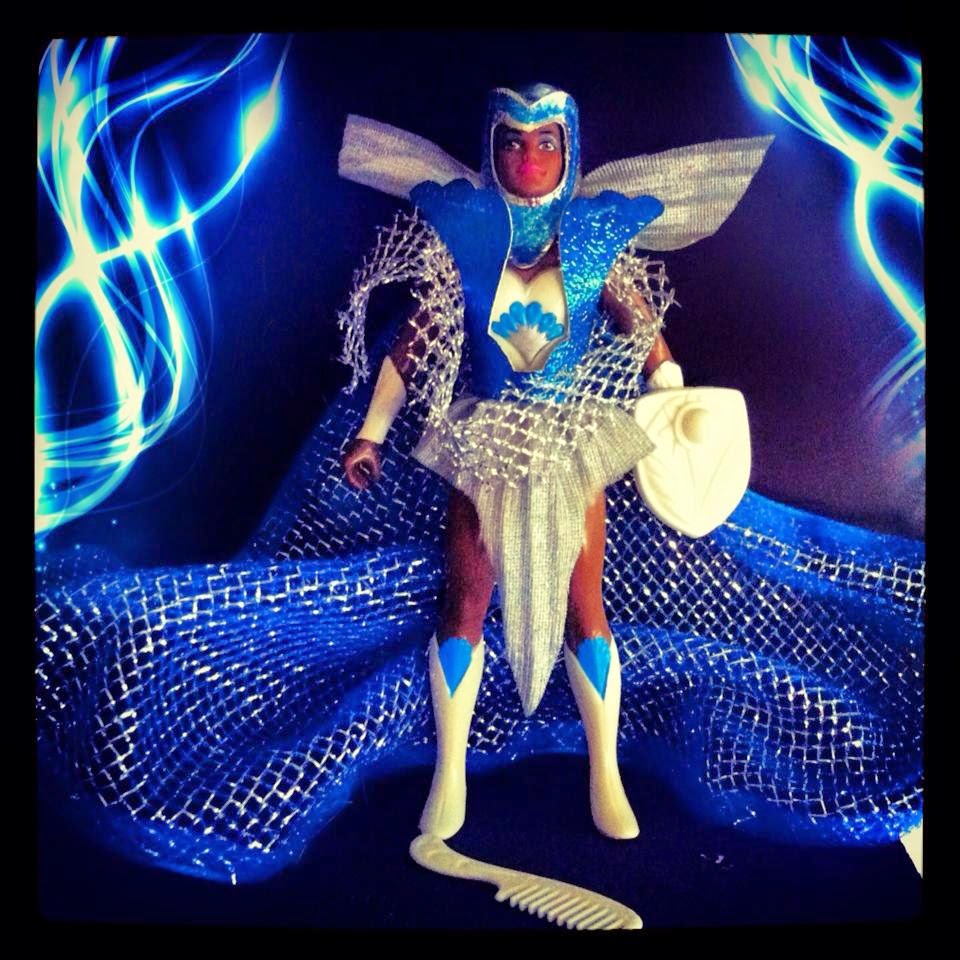 Netossa
A rarity in the world of POP. Netossa has always been one of the more cooler figures to me. I love her cape. There is a lot going on with this figure that makes her look like a true blue warrior. I love the swirling blue special effect too! A truly captivating photo! 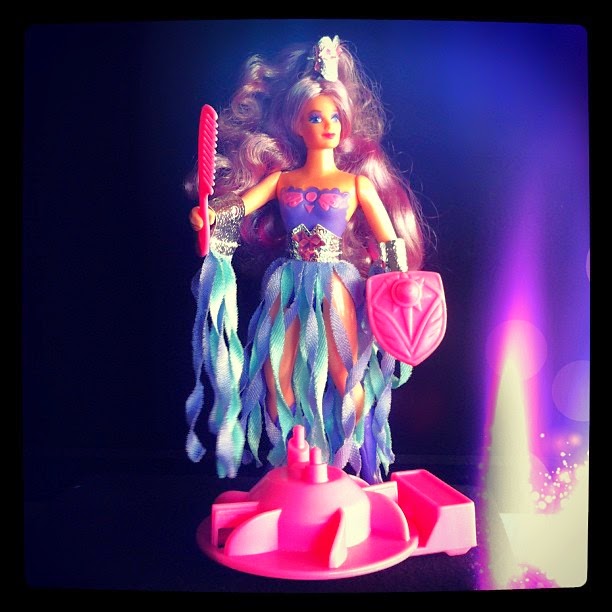 Spinnerella
Well here we go! The rarest of the rare! The dizzying defender known as Spinnerella! Some feel she is just a straight up repaint of Flutterina, but this figure looks nothing like Flutterina. She has a look all her own and it never gets old either. This rare She-Ra item can go for hundreds to even thousands of dollars in some instances. What I wouldn't give for a time machine to take me back with a purse full of coins. Oh well, at least we have this stunning picture from Grayskull Warrior. 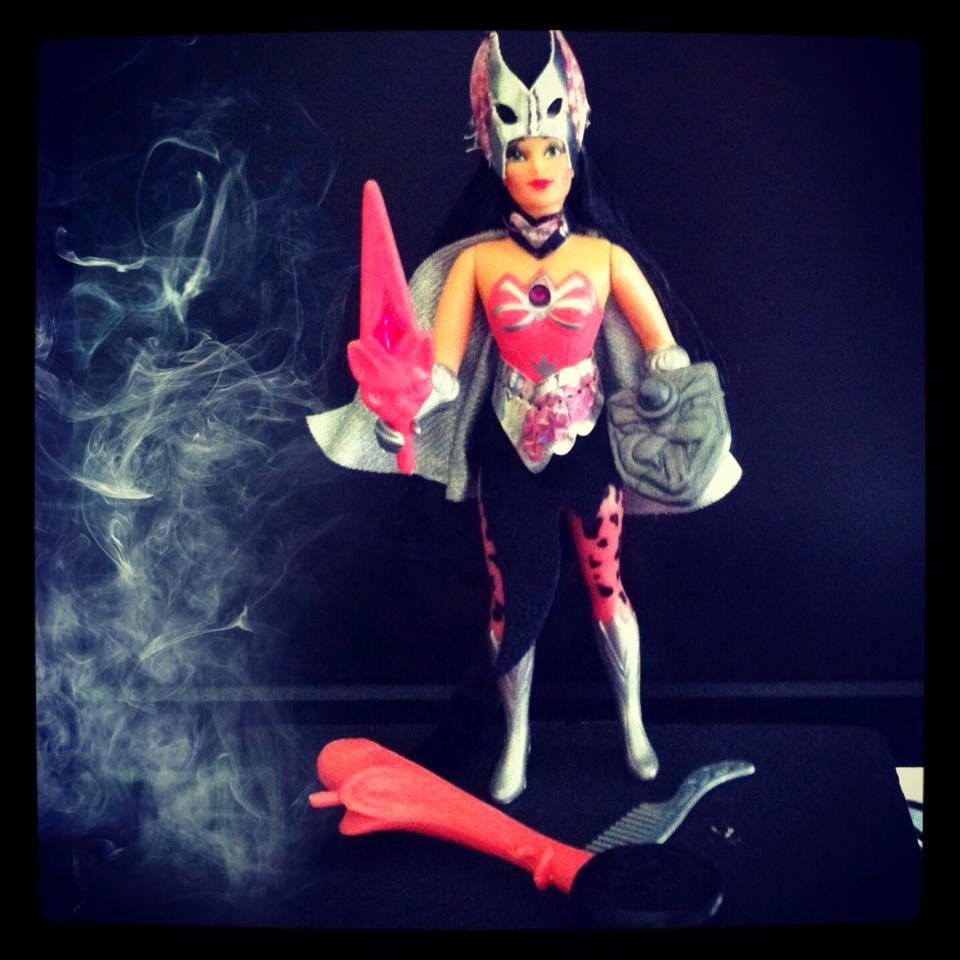 Shower Power Catra
One of the more interesting sounding names for a figure, Shower Power Catra is another rarity in the world of POP, though not as rare as Netossa or Spinnerella. The smoke effect is really cool too. I can't help but wonder if Catra was putting out a fire with her shower power weapon. 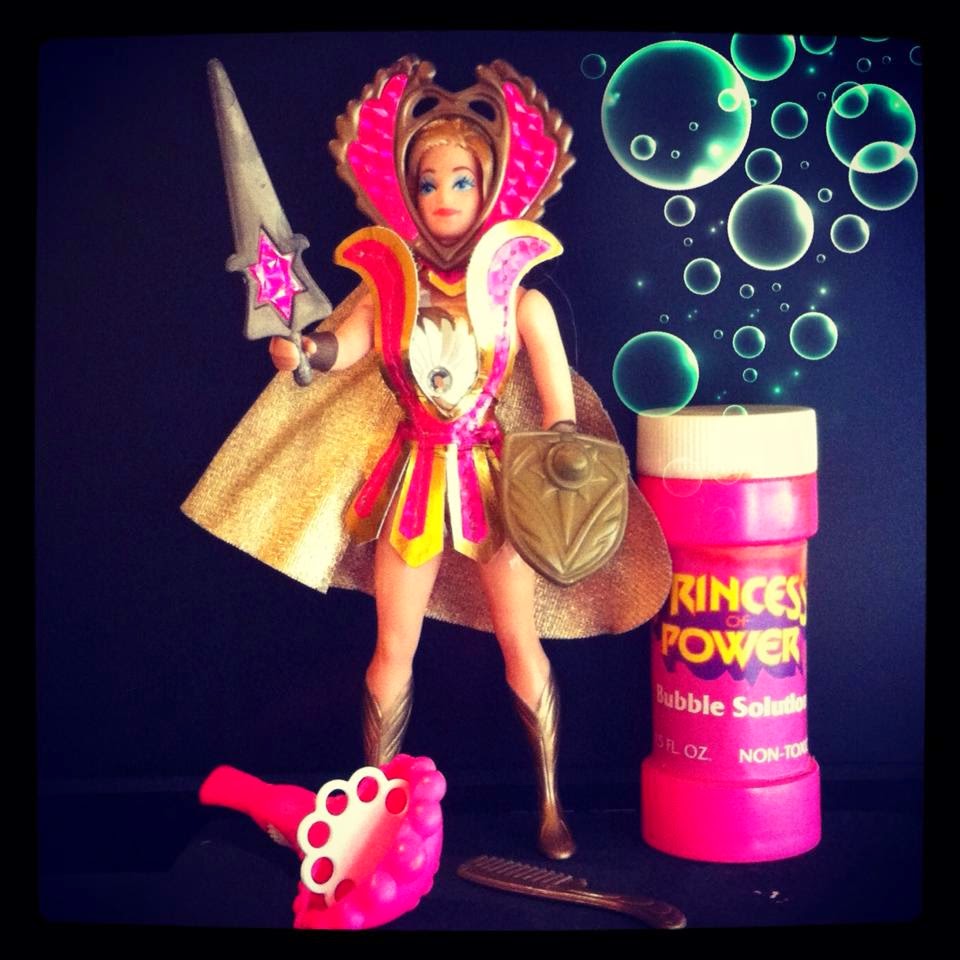 Bubble Power She-Ra
We started with She-Ra, and we will end with She-Ra. This was the third She-Ra variant and one that translated into a great MOTUC release. I love this picture because of the bubbles. That is just so cool and a really great use of the effect.

That's it for the photos. I wish the original vintage Star Sister prototypes had been made, because there is no doubt that GrayskullWarrior would have captured some amazing images of them too.

I can't express enough thanks to GrayskullWarrior for agreeing to have his photos posted on Diary of a Dorkette. He is a very cool guy and I am looking forward to what he shares with everyone next.

For those who are interested in his work, head over to GrayskullWarrior's Flickr album, full of great shots of vintage and new He-Man and She-Ra items. GrayskullWarrior also posts photos on FaceBook as well. (His MOTUC photos are amazing.) Also, if you are on Instagram look him up under GrayskullWarrior.

In fact, look me up too! Diary of a Dorkette is joining the 21st Century and is now on Instagram. I make it sound like there's a team working together to post stuff, but it's just me. I've actually enjoyed joining Instagram. Anyways, a big thanks again to GrayskullWarrior. I hope that you all enjoy these photos as much as I have. Take care everybody!