All My Soap Operas...

... are nearly gone. As I have mentioned from time to time, I am a tremendous fan of soap operas. Aside from comics, I feel that soap operas are the ultimate form of storytelling. Everything and the kitchen sink is added to a slew of story lines. You've got drama, comedy, suspense, science fiction, romance, and the kitchen sink. Folks can say what they want about soap operas, and many people have, like "soap actors have horrible acting skills." (I say watch Roger Howarth play Todd Manning. That is how it is done.) Or one of my favorites, "Soap story lines are so far fetched." Really? They make movies where grown men run around in spandex. People eat that stuff up.

Anyways. Yesterday marked a year since All My Children last aired. I loved and hated the final episode. Part of the problem is that the show never should have ended. Erica Kane should still be man eating and double slapping fools all day long. I think of this show daily and I am still writing in my soap opera fan fiction journal! AMC lives on in a Hello Kitty journal. Hot Mess.

Now let's be real, soap fans are not immune to collecting. And since I suffer from Collecting Everything Disorder, I have also come across soap opera items for the Archival Room. In honor of All My Children, I thought it would be fun to check out a fun relic from the '90s. All My Children trading cards! (Oh yes they did!) 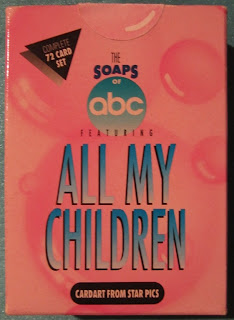 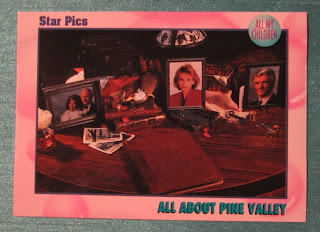 One really great card featured that infamous table with pictures from the opening credit scene from the '90s. The theme song needs to be released on iTunes. I sometimes jam out to the Dynasty theme song on my way home from work. Sad, but a reminder of how awesome theme songs are. 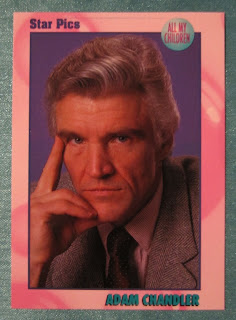 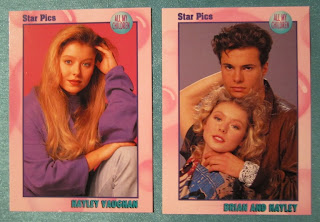 Check out Kelly Ripa from her early days on All My Children. I remember her debut like it was yesterday. She was wearing a black wig, and in an act of defiance (to stick it her dad Adam Chandler) she rips the wig off exposing a long stretch of blond hair. She was so feisty and cool, I just wanted to model myself after her as I became a teen too. 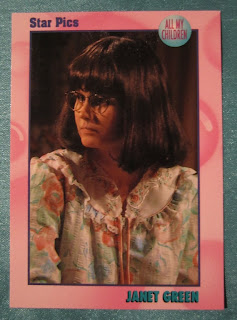 Having an evil twin has long been a soap staple. But none of them were as bad as Janet 'From Another Planet' Green. The ultimate in loony mayhem. You could always expect good story when Janet Green came to town doing her best to destroy twin sister Natalie's life. Janet and Natalie were both played by Kate Collins (and a couple other actresses as well.) But Kate's portrayal truly was the stuff of soap legend. 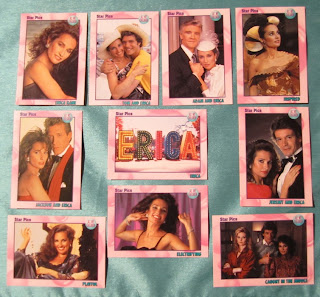 Of course talk of soap legend wouldn't be complete without Susan Lucci. La Lucci. The woman who taught me how to slap fools in my wake. I don't know where I'd be without Erica Kane. I like to think I get my confidence from such brave sirens like She-Ra or Storm, but the truth is I was watching Erica Kane long before I ever heard of most anyone else. There is just something phenomenal about Susan Lucci's Erica. Maybe it is because we are both Italian. Maybe it is because we've both rocked a lot of hair styles through the years. I'm not really sure, but her character just really spoke to me. Her confidence and ability to go after what she wants was always exciting. I couldn't wait to see where she'd go next, because I would be right there watching.
I miss these characters and so much more. Hopefully ABC will realize the grave mistake they made by cancelling All My Children and One Life to Live. I'll take a movie, mini series, or regular show back on television 5 days a week. Soaps are an important part of many people's lives and as such, they should still be around to entertain and inspire us.
So for those who like these trading cards, check them out on eBay. I bought these a couple years ago for a steal and there were plenty more too! These trading cards are perfect for soap fans. Now I just need to get my hands on some OLTL and GH trading cards...
Posted by Michael Lynn P. at 6:45 PM

Email ThisBlogThis!Share to TwitterShare to FacebookShare to Pinterest
Labels: Soaps