A whole new Toy Chest Tuesday is upon us! Since She-Ra fans the world over got amazing news over the weekend with the possibility of an all new Castle Grayskull and, finally, an Octavia figure, I thought it would be fun to have a She-Ra themed Toy Chest! For news on Grayskull and Octavia head over here.

Back when She-Ra was kicking butt on our television screens, She-Ra action dolls were popular all around the world (and she still is popular with fans all over.) As a child I always wondered what it was like for kids in other countries. Were the toy stores set up the same way? Were the items in the same packaging? What would it be like to talk to other fans from all over the world about our love for the most powerful woman in the universe? Now as an adult, I get to finally do that! I have loved talking with people from all over about She-Ra. I also am super thrilled to have a She-Ra item that was originally sold in Mexico. So let's check out Princesas del Poder: Angella! 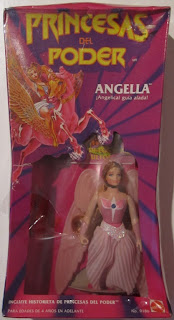 There were some really big differences between the She-Ra figures sold in America and Mexico. In Mexico She-Ra figures were released in a window box format. There is a thin plastic window over the figure, while a layer of plastic is wrapped all around the box. This item is not in the best of condition, there are some tears and the box is slightly smashed in, but it is still a really great item! Also check out the image of Starburst She-Ra in the top left corner. This was the image used for the second series of POP toys in America. I am not sure when these figures were released in Mexico, but it is interesting that art for the second series was used for this series. Angella came with her wings, removable skirt, comb, and a mini-comic. I will also note that Angella's comb was very different from the combs I got with my older POP figures. This version's comb can attach to the figure's wrist, so it can actually look like the figure is brushing her own hair. 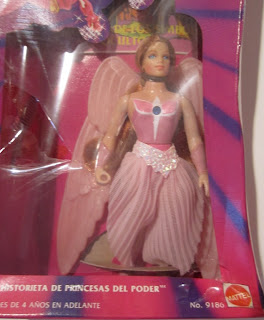 Upon closer inspection there are even differences with the figure herself. This Angella is very different from what was released in America. Her face sculpt is slightly different as is her hair color. The version from Mexico has streaks. The material for the skirt is not as sheer and the skirt band is a different material. (The figure released in America had that holographic like foil over the band.) These things are very interesting and make collecting even more fun. I am also assuming these differences are due to different countries of manufacture. This figure was made in Mexico, while the American POP figures were made in Taiwan so there were probably different materials used. 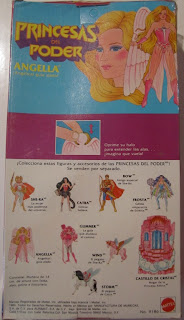 Now the fun part is with the back of the box. The images of Angella and the rest of the characters are the same. Though there are a few people missing, Double Trouble, Castaspella, Arrow, Enchanta, and Kowl were missing from the back. But I do love the characters that were included. I mean the line up on the back was essentially the heavy hitters of POP. 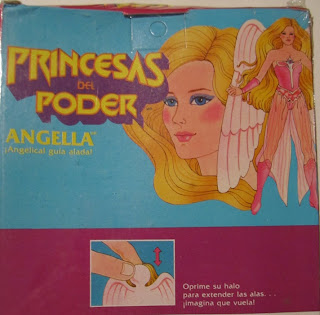 As I have mentioned before, I adore the head shot and then full character design at the top. I just think that image is classic and so much fun. Also, let's just look at Angella in general. Most of the POP figures did not look drastically different from their Filmation counterparts, but Angella was an exception. This figure looked nothing like her animated version, but she still looked really cool. The animated version wore blue tights and a pink top. Her hair was golden yellow, not the slight reddish color on the figure. However, since Angella and Glimmer are mother/daughter, it would make sense for Angella to have a slight reddish tint to go better with Glimmer's pink hair. I mean I am not sure if pink hair would be genetic, but on Etheria, anything is possible. 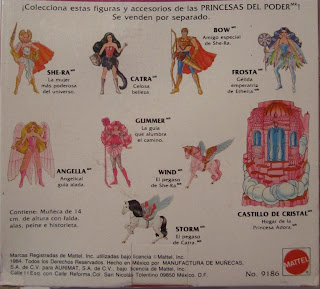 Each character has their little trademark description under their name, and each description is the same as what was mentioned on the American cards except for two differences. On the American cards there were some lengthy descriptions for Swiftwind and Storm. But on this card back Swiftwind is actually called Wind and is described as She-Ra's Pegasus. Storm is also described as a Pegasus. I like that aspect. I mean there is nothing wrong with saying "flying horse" but I like the idea of the word Pegasus being used to describe the character's rides. Although would a flying unicorn be a Pegasus? I mean Storm is a Pegasus, but what would Swiftwind be classified as exactly?

Anyways I really liked the window box packaging for the She-Ra figures in Mexico. It was a different approach to packaging. I also really like the face sculpt and paint for this Angella. Of course what I would have really liked would have been to show some side by side differences of the Angella from Mexico and the one from America. There were some interesting differences and at the end of the day that just makes collecting even more fun. However this is the only Angella I have for now. Angella was one of the few POP action dolls that I missed out on growing up. I don't know why, I just never picked her on my trips to the toy stores back then. Maybe if I stumble upon another one I can revisit this toy and do a side by side. Or something. I am itching to see how those wings work!

So enjoy this Toy Chest! If you have any thoughts or memories about Angella, feel free to leave them! I hope everyone is doing well, and be sure to check back! The week is still young so there will be some new stuff coming up. Until next time!
Posted by Michael Lynn P. at 4:11 PM