Welcome to another edition of Toy Chest Tuesday! Two toys enter, one toy leaves! (Oh I am really yearning for some Mad Max Beyond Thunderdome figures.) Aside from my crazy dreams, let's talk toys. I'm pulling out some fun relics from the Archival Room: Earthworm Jim!
After the success of Teenage Mutant Ninja Turtles the '90s saw Playmates release numerous "gross-out" toy lines featuring all kinds of interesting characters. Earthworm Jim was one such line. With the body of a super hero and the head of a... well... worm, Earthworm Jim fought to defend Earth, the Cosmos, and everything else! The line reminded me of Don Bluth's Space Ace, but with grody looking insect/human hybrids. Let's check out the toys. 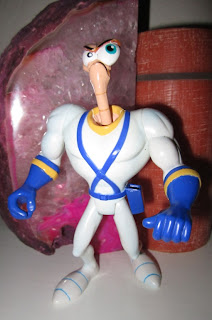 Earthworm Jim was a chunky figure. A hulking mass of super hero muscle, and then there was the head. He had the perfect facial expression to capture how we were all feeling in the '90s: sarcastic and full of 'tude. This figure came with his pet Snott and two guns. (Those items are not shown. Obviously.) 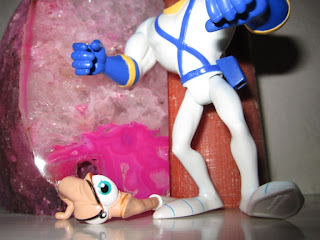 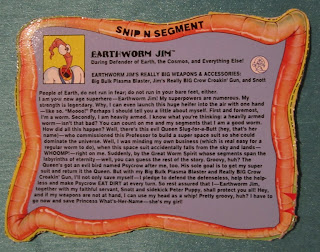 The Snip 'n Segment card really set up a great deal for just who Earthworm Jim is. He was just a simple worm rollin around, until a magical space suit fell on him from the sky. He can also use his head to whip foes into shape. His biggest foe is Queen Slug-for-a-Butt. And he also has a main squeeze, if only he could remember her name... 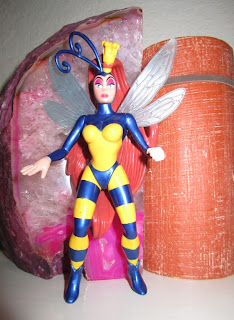 Behind every good worm (and reason for collecting a toy line) is a really cool Insectikan. Princess What's-Her-Name was the reason I wanted to collect this line. I thought she was so cool. Big hair. Bold eye shadow. A crown. And wings? How could anyone not want this figure? 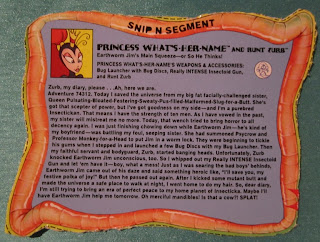 Now here is a bio I can get with! This Princess was not your usual Princess. Her sister was the evil Queen-Slug-for-a-Butt and no matter how rough and tough Earthworm Jim was, more than likely, Princess What's-Her-Name was the one saving the universe. I'm not making that up. Click on the Snip n Segment to read for yourself! 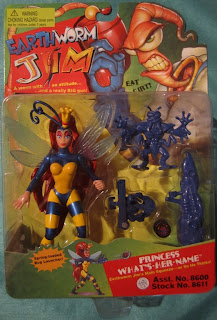 There were some really cool things that came with Princess What's-Her-Name. Each figure came with a little sidekick along with two weapons. 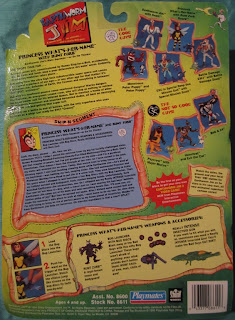 The back of the card was typical Playmates fare. Story bio, character bio, other toys in the line, and details on the figure. The great thing about this line was that it was completely compatible with pretty much every Playmates line that came out in the '90s. 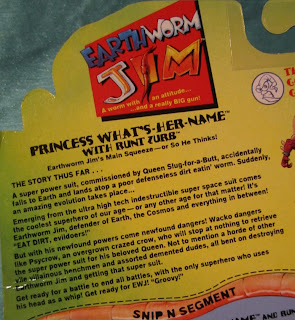 The story bio contains aspects of Earthworm Jim's bio, but there are some differences. 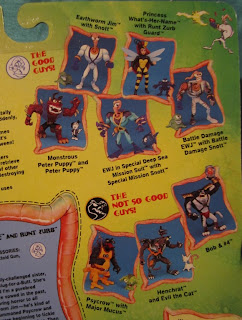 There were quite a number of Earthworm Jim variants. The other characters were standard gross out characters. I do wish they had made a Queen-Slug-for-a-Butt. That would have been the coolest. Princess What's-Her-Name was a great figure. I'm glad she was a part of the line. 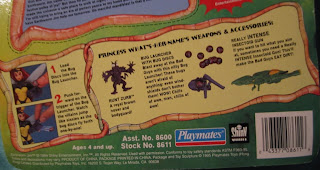 Runt Zurb was the trusty aid to the Princess, and the pair reminded be of another Princess and trusty aid (Princess Peach and Toad.) However there are quite a number of differences. Princess Peach is aware of her name, yet is in constant need of a good rescue (barring that one DS outing.) And though Runt Zurb and Toad may grate on a person's nerves, Runt looked like something from a sewer while Toad looked like something from a yard made up of cotton candy.
Earthworm Jim was a big deal. There were comics, video games, and cartoons. Earthworm Jim was a part of a number of characters with that sarcastic '90s attitude that held up longer than most. (Does anyone recall Gex?) The current status of the franchise has been up in the air for awhile now, but like anything, I am sure the worm will get his chance again. Mezco did release a special edition Earthworm Jim as a 2012 SDCC exclusive, though I am not sure what that will all mean exactly. For now enjoy the pictures... and everything else!