Another Dorkette Book Club is upon us. Usually the books that are addressed in this feature range from old Fear Street stories to anything by Christopher Pike. However, today we will be looking at a book that recently came out that I finished recently. Here's the thing about books and me. I love to read, but lately I have not had the time. For example, it took me a full year to finish Water For Elephants. I mean there were many reasons for that (i.e. it took me awhile to get into it) but I am also a very busy woman. I'm a gal on the go. Sometimes reading a good book goes by the wayside. With that said, when the book is really really good, I find time. The Supergirls: Fashion, feminism, fantasy, and the history of comic book heroines by Mike Madrid was a fantastic book that took me more like one week to finish.

Mike Madrid knows his comic history, or should I say Herstory. The amount of information in this book about female comic characters is amazing. He breaks the book down by decade, two chapters dedicated to each decade starting in the 1940's and he really weaves a story about how these women were created. He examines how culture and society changed throughout the decades and how female characters were either hindered or allowed to grow under those changes. This is a who's who of female super heroes.

I tend to think that I know my stuff on super heroines, but I found myself learning so much and really feeling lucky that I wasn't a reader back in the day. I mean when the Justice Society of America first came out in the early '40s, Wonder Woman was given the role of secretary. Huh? I was just so saddened to read that. I mean this is Wonder Woman. Let Superman be the secretary. As I have said, I am a Marvel kinda gal, but even Marvel had some interesting roles for female characters back then, and even recently too. All of which is chronicled in this amazing book.

There was so much to get out of this book but there were still some things that I would have liked to have read too. I would have loved to know Mike's thoughts on where he would like to see female characters go with comics in the future. It felt like there were some slight wishes and hopes about the future but I would have been in heaven reading an entire chapter dedicated to just talk on what would be great for the state of super heroines, both in comics and film. Let's be real, I am beyond ready for a good (super emphasis on good) lead super heroine film. I'm talking Wonder Woman. Let's also add Ms. Marvel (so that she could eventually arrive in a flashy Avengers sequel.) And while we are at it, I want a big splashy She-Ra movie. STAT.

Also, I would love, love, love a book on other forms of super heroines from cartoons and the like. In other words, I just want a nice big book to talk about She-Ra and what she had to give to the world of strong heroic folk.

Anyways, here is the front and back of the book! 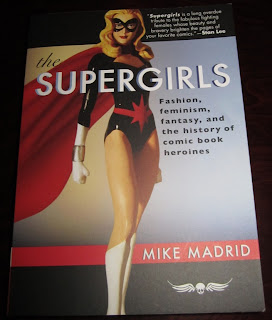 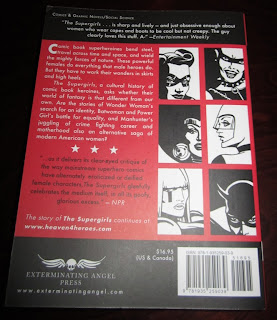 I really enjoyed this book and if you have not read this yet, pick it up! It was just fantastic. If you have already read it, feel free to leave your thoughts about it! In the next edition of Dorkette Book Club, we check out a lovely little tome on a certain blue bomber's various enemies. It will be awesome! Until next time.
Posted by Michael Lynn P. at 6:22 PM