Now there are exceptions. Infinite Concepts were responsible for a very nice MK line that gave us a cool Sonya Blade and Mileena figure. The problem with that line was that it was very limited. Beyond limited. And I should be slightly fair, Sonya has made brief appearances in other MK toy lines, but not that many.

So back in 1996 things seemed set to change. A toy company called Toy Island released two versions of a female MK character that was not Sonya Blade! Fans finally got the chance to own the very deadly ninja named: Jade! 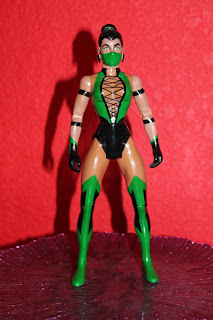 She was a secret character in Mortal Kombat II. Remember all the fun secrets and tricks to unlock in MK games? It was so much fun! Anyways, Jade became a fully playable character in the fighting extravaganza Ultimate Mortal Kombat 3. I liked her story line because she was friends with Kitana, and was like this bad ass ninja bodyguard. In fact one of the big selling points for me was all the characters and mythos from the MK series. It was like a soap opera and comic book all rolled into one. The one thing that did get on my nerves though was the constant characters that would die and then be brought back to life in the main story. (And here I thought Marvel had issues with the afterlife coming back.)
Anyways, this Jade figure was a 10 inch fighting machine! (There was also a smaller scale version too.) The articulation was limited, but not bad. Jade also had her featured ninja/street walker suit on which was a popular fashion for the times. I recall purchasing her at the local Kay-Bee Toy Store and she was on clearance for pennies on the dollar. Oh I miss those good clearance sales at Kay-Bee. 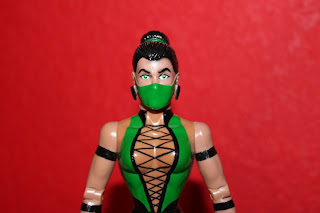 For 1996, this was not a bad figure. The likeness of the character from the video game was pretty close. But the saddest thing of all is that this is the last time anyone has seen a Jade MK figure. I just feel like that is sad and quite frankly I think toy companies should be doing better. Where is a nice Mortal Kombat Klassics line at? (I realize that Jazwares has already cornered the market on this concept, but they aren't utilizing the full lineup properly.) I would love nothing more than to see a nice articulated MK line that features many characters besides the usual Scorpion, Sub-Zero, Goro, Johnny Cage, or Lui Kang. Kung Lao and Raiden if we're lucky.
I want to see Sindel, Kitana, and Mileena. I loved the whole story arc of Mileena being an evil clone of Kitana and having a grill that was in need of much dental work. Oh there are just so many possibilities! Am I alone in this? Are people thrilled to pick up Scorpion after Scorpion? I just really hope to see a more well rounded cast of MK action figures in stores.
So that is about it for Toy Chest Tuesday! It was a short one for sure, but if you want to keep the vintage toy talk going, head on over to NerdSociety where I recently posted a nice piece on that fabled toy line that brought us into the future: Captain Power! Click here to read more!
There is more dorkette goodness to come, so don't go far! I've got a lovely interview coming up with the hottest real action figure hero in the world! Take care everyone!
Posted by Michael Lynn P. at 4:49 PM