This week's Toy Chest Tuesday is a very special one. As many of you know, I am an obsessed collector. I don't quite know what it is about dolls and action figures, but I have been hooked since I was little. So something happened in the mid to late 90's that really changed the way I collected. I had sort of taken a breather from collecting. I had just gotten off a high from the long running Teenage Mutant Ninja Turtles line, to say nothing of Kenner's Aliens and Toy Biz's various Marvel products. (These were the heavy hitters, I also had a torrid love affair with Mattel's 90210 dolls and who couldn't resist Playmate's Swans Crossing?) The list could go on, because I have yet to really touch upon what happened when the world was introduced to Spawn, but I don't want to even go there right now.

Anyways, I was a little off. I was a teenager. I was moody and beyond bitchy, a real nightmare. Just a nasty little piece of work. I had like 1.5 friends and it just wasn't looking good for my life. Luckily I had the imaginative worlds of video games to sort of fill the void of my awkward existence. It was the heyday of the Sony PlayStation. I had signed on because of the eventual release of Final Fantasy VII, but there was one game that came out right before that really piqued my interest. Tomb Raider had been unlike any other game at the time. The main character, and really the only character, was female. I didn't quite know what to do with that.

For so many years it was Mario or Link. Or Kirby. I mean I suppose I had Samus as a role model, but the gamer only found out Samus was a woman at the very end of the game. It was nice to see a game based off a kick ass broad and she wasn't involved in an ensemble cast and she wasn't in need of being rescued. My mega-bitch teenage self was just thrilled.

Not for nothing, Tomb Raider was far from perfect. I had a love hate relationship with that game and its star Lara Croft. To start off with, that shit was hard. I don't know any other way to say it. Tomb Raider was a hard game. There were wolves and giant bears, all that swimming with a limited air supply, and let's not forget the whole falling from cliffs and actually, ya know, dying... It was a hard game!

And of course, there was also the slight annoyance that Lara was only really cool because she had huge pixelated breasts and tiny boom boom shorts. The few guy friends I did have at the time were far more interested in having Lara get caught in odd camera angles with her legs spread open. I have no idea if my girl friends liked Lara, because we never talked video games. We talked lip gloss and who was crushing on who. So I was always conflicted with the message of Lara Croft. Was she the super bad ass adventurer that couldn't breathe underwater, or was she just a hot sexualized character meant to be a selling point for males? I of course have learned that the answer is far more complicated than that, because she was both. And when we look back on the history of video games, Lara had to be both because I don't know that she would have existed otherwise. The whole concept of a main female character in a video game has evolved and shifted. Baby step by baby step.

Speaking of shifting, the world of toy collecting merged with the world of video games in a big way. There was no denying the cultural impact that Lara Croft had on the masses, so it was only a matter of time before someone made an action figure of her. 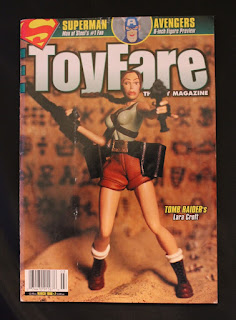 This was my very first issue of ToyFare magazine. It was Issue number 7 from March 1998, and I don't know how I had missed the other 6 issues, but this was my big introduction. Life was never the same. I snatched the magazine up at what had been a Bookstop. (Remember those? Oh I loved me a good Bookstop.) Anyways, ToyFare magazine was about, like, legit collecting. I don't know how to explain it. For the longest time I felt that I was slightly crazy for collecting, I didn't really know other people my age that were collecting. Yeah everyone was playing video games, but they certainly weren't owning action figures and dolls (To my knowledge. I'm sure there were plenty closet collectors.) So ToyFare was like a little slice of perfection. It showed me that there was indeed a world of toy collectors and that it was OK to geek out in the middle of the toy aisle. 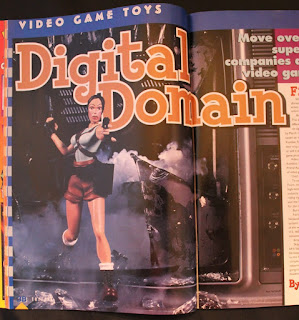 The featured article was titled Digital Domain and it was written by Dallas Middaugh. It was essentially about the push for video game characters to break into the world of toys. At that time there was some trepidation about video game stars crossing over into the world of plastic. Of course we now know that the "trend" would become a huge lasting hit. It is practically a pre-requisite for a video game to have an accompanying toy line with it. And what about the original Lara Croft action figure? Well let's check her out!

As you can see, toy making has come a long way. I remember stalking my local Toysrus every week checking to see if she was finally released. Once she was, I was happy and slightly disappointed. There were some minor changes from the Lara on the cover of ToyFare to what was actually released by Toy Biz. (Those shoulders!) 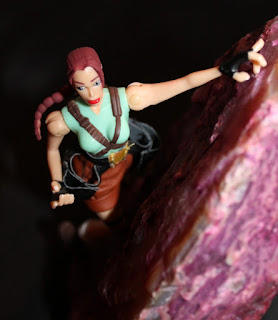 She came with some guns and two creatures. One was a bat and the other was a red dragon of some sort. It was a nice effort, and I have fond memories of this first figure. After all, had she not been placed front and center on the cover of ToyFare, who knows how long it would have taken me to get into that wonderful world of ToyFare magazine! I really miss ToyFare.

Of course this release by Toy Biz would not be the last time we saw Lara in toy form. She has been released by quite a few different companies, but around 1999-2000, Playmates released a new Tomb Raider line and made a really nice update to Lara. 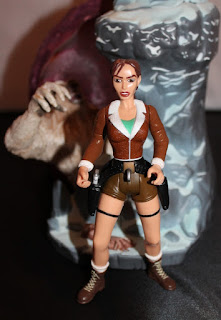 The line was called Tomb Raider: Adventures of Lara Croft and it was a very nice line. The figures were in a 6 inch scale, and they came with elaborate set pieces. There were also some diorama sets to purchase as well. This Lara came with a rocky mountain piece with a vengeful yeti. Playmates had really done a good job with the look of this line. 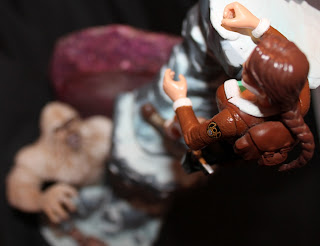 The other two in the set that I can recall was a motorcycle set, a set with a tiger, and an underwater set with shark. Can I just say that underwater levels are always difficult in video games! Unless there is of course an unlimited air supply. I mean seriously. Sonic the Hedgehog has got to be the worst though. Those damn levels where the blue blur gets the slightest bit under water are always petrifying.

Anyways, Playmates was also responsible for the Tomb Raider toys based off the movie. Those were really cool, but I never collected them because I had issues with the movies. And I will just leave it at that.

So what of Lara today? Neca has released some wonderful figures of her. With the all new Tomb Raider game out right now, I believe Play Arts Kai is coming out with a really nice articulated Lara Croft probably sometime this Summer too. So it is nice to see the franchise living on.

And that's about it for Toy Chest Tuesday! I have yet to play the new Tomb Raider game, but I hope that people enjoy it. And I hope you all enjoy this little look back on some Lara Croft figures! Don't go far, because there will be some more cool stuff coming up! Take care everybody.