Ok dorky pillars of the community. It is time to gather for the Dorkette Book Club! Today we will be going over another great Christopher Pike novel, entitled Whisper of Death. I have been wanting to talk about this book for a very long time now, and after some false starts I am finally ready to begin. This book was so thrilling, and that was just with the cover. After I read the book I was completely blown away. I'm getting ahead of myself though, why not check out the cover and see what kind of story we're dealing with, hmm? 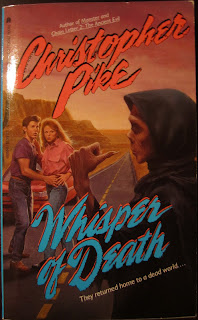 The cover art was completely creepy as well as expressing total feeling of desolation. Two teens are holding each other in what looks like cautious terror over Death needing to hitch a ride. That or Death is just pointing his thumb at a botched nose job. Either way this was one of my favorite Christopher Pike covers. Incidentally the art work was by Brian Kotzky.

Underneath the title was the ominous tagline: They returned home to a dead world... I was hooked. With that cover and tagline, I just knew I would be in for an exciting story. I mean what would any of us do if we were driving in the desert and all of a sudden we see some creepy mummified person in a cloaked robe?  I probably would stay in the car, but I'd still be terrified.

Aside from the cover, let's learn more about what the actual story was between the pages. 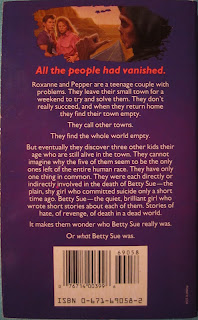 So after reading the book's description we can see that the story sounds like a cool post apocalyptic world without the apocalypse. I was instantly intrigued. What was the story of these five teens that are the only people left in the world? And who the hell was this Betty Sue chick? Oh dear readers, this book was so good.

Ok so Roxeanne is the main character and her boyfriend is Pepper. They have some serious things to work out, namely that Rox is preggars and wants to keep it. Pepper does not and Rox decides to go forward with an abortion to make sure she can still be his girlfriend. First of all, dating a man whose name is a type of seasoning just sounds like a bad idea. Anyway Pepper is not really the best boyfriend. He thinks with the wrong body part a lot and that sort of starts the whole drama with why the five teens are the only living souls left on Earth. However that story point is not fully revealed until the end.

Alright, the spine tingling terror begins once Rox and Pepper come back to their town from the clinic. After being unable to go through with the abortion, Rx decides to keep the baby and the two teens decide to figure out what to do. Anyway while heading back into town, they start to find out that people are missing. Rox and Pepper soon find out they are alone, until they come across three other people they know. Soon the five teens realize they are all connected in some weird way to Betty Sue, a classmate who committed suicide. The teens also end up dying one by one. In really freaky ways. Of course each death brings a new unraveling to the mystery of who is behind this macabre experience. (For those wondering, no, the story is not some Scooby Doo episode where an old man appears from under a bed sheet.)

SPOILER ALERT! (Because I'm so sure you will all go out and actually read this book, I will provide the scoop for those that won't.)

After four of the five teens die, Roxeanne is the only one left alive. Betty Sue (calling herself the Queen Beetle) pops up as the mastermind behind everything, which turns out to be sort of real and sort of like an alternate choose-your-own-adventure path. Betty Sue cryptically explains the story and her hateful actions. Turns out Pepper fooled around on Roxeanne with Betty Sue. So Roxeanne and Betty Sue both ended up pregnant. Betty Sue killed herself because Pepper's seed was killing her. A hot mess, but stay with me, it is such a good story. Ok so here is the scoop. At the very end of the book Pepper is sitting in the waiting room at the abortion clinic from the beginning of the book. He is waiting for Roxeanne to have an abortion.

This is where it gets complicated. While preparing to go through her abortion, Roxeanne finally realizes she has a choice to make via Betty Sue's deathly whispers. If Rox leaves like she did in the beginning of the story, she will do a groundhog day and relive the nightmare of the world being empty except for the five teens forever to be picked off by the evil Betty Sue. Betty Sue hated what Pepper did to her and wants to make the other teens suffer the wrath of her hatred. So Roxeanne decides to die during the operation so that she does not have to live the curse over again. She does not want to see the people she cares about die over and over. After Rox is gone, Pepper freaks out and only half realizes that he is a douche bag.

Once Pepper leaves the clinic he ends up thinking with his ding-a-ling again and offers a lift to a pretty young thing that needs a ride into town. Someone was not paying attention to the book cover, because the hitchhiker actually turns out to be Betty Sue. And Betty Sue ends up having some plans for Pepper that will most likely involve his death, though that particular plot point is left up to the reader to decide.

I had no idea what I was getting into when I read this book. Such a huge plot twist. I was a pre-teen when I first read this book, and I was just so surprised. I felt so grown up reading about messy teen relationships, abortion clinics, and evil beings bent on death and destruction via storytelling. It was a remarkable tale for the young adult set. That was the thing about Christopher Pike books, there was always some plot twist that really got the reader to think about life issues. As a pre-teen I vaguely knew about issues like abortion or suicide. What I did know though, was that there was no real outlet to talk about them. I was a pre-teen. In the early '90s. My parents weren't going to talk about those matters. So it was nice to be able to read a book that was scary yet also able to briefly explore certain topics that I had no real awareness of. This book didn't answer all of my questions, but the book was able to at least bring the topics up. There was no secrecy. It helped me to feel like I was growing up and ready to learn about serious choices that people have to sometimes make in the world. So thank goodness for Christopher Pike.

On a side note, did Christopher Pike write all his books, or were some of them ghost written? I know some R.L. Stine books were ghost written, but I don't actively know about Christopher Pike. If anyone knows, please feel free to post a comment. I would wiki the question, but we all know how messy wiki can be.

Anyways if you find yourself with a copy of Whisper of Death, give it a try. It is a good read. That is about it for the latest edition of Dorkette Book Club!

Stick around for this weekend as She-Ra Saturday will see the conclusion of Adora's Search for Honor Part 1. I hope it will be quite entertaining!
Posted by Michael Lynn P. at 5:05 PM