Scream for an all new Toy Chest Tuesday! I'm sure someone will hear you. In keeping with last week's theme regarding toys and Summer movies, I thought it would be best to continue the trend. Prometheus hit theaters in America this past Friday. And my goodness what a movie. I won't discuss anything about the details so as not to spoil the story, all I will say is I had way too many questions. (I guess that is ok, because it does lead to a lot of conversations about the possible answers.) The pace of the film also changed about half way through and it felt a bit rushed. I also could have done without the ending, but maybe I will discuss that another time when it won't be such a spoiler-fest.

Instead, let's turn to the toyline that eventually hatched from Ridley Scott's Alien film. What would we do without Ripley and those pesky Xenomorphs? Now I know that the Aliens toyline from Kenner was more based off of the James Cameron sequel, but again, nothing would really have come to pass had we not had the first Alien. So released in 1992 by Kenner, the Aliens toyline was sort of connected to the film, but took the characters a step further. Like an altered or expanded universe. Certain characters from the Aliens film were given the royal figure treatment. In the first series fans got Lt. Ripley, android Bishop, Corp. Hicks, Sgt. Apone, and Sgt. Drake.

Now this is where the toyline diverged from the film. There was a new mythology added to the xenomorphs that involved more of a specific type of alien. There was the Scorpion Alien, Gorilla Alien, Bull Alien, Shrimp Po-Boy Alien. (I kid, there was no Shrimp Po-Boy Alien.) Basically the type of host would determine the type of alien that would be made. If a facehugger attached itself to a chicken, there would have been a Chicken Alien. Got it? Also here is a fun fact about these unique aliens, they were featured as enemies in the Alien vs. Predator video game for the Super Nintendo.

Back to the toys though, each Space Marine figure came with a unique weapon and feature, as well as a Dark Horse mini-comic. The alien figures also came with a mini-comic but also a cute little facehugger along with a special feature.

Now since I know how you all enjoy a good trip down memory lane, I have decided to make this Toy Chest Tuesday into two parts. I rarely do this, but there is just so much stuff to look at from the first series of Aliens figures by Kenner. So for today we are going to look over the mini-comics that came with the figures as well as the file card that could be cut out from the main card.

Up first is Bishop! 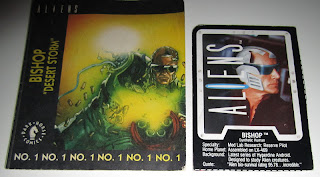 Bishop came with the first issue in the Aliens mini-comics. I loved the cover to this mini-comic as it had so much movement and action in it. I also have a soft spot for androids. I don't know what it is. Maybe it deals with their inherent nature to help and be kind. Unless they are crossed or reprogrammed. In which case folks have a lot of mess on their hands. Anyways in this comic (titled Desert Storm)  Bishop and Apone are driving around on a desert planet in their Stinger XT-37s looking for "Bugs" (a nickname for the aliens.) Anyways Bishop comes across the Scorpion Alien. Soon a whole slew of them attack. Apone gets dragged down to the alien hive and Bishop calls for backup. Hicks shows up and together with Bishop, they prepare to enter the hive to save Apone. What was always cool about these mini-comics was that the characters got to use their weapons and features just like the toy. It was an interesting way for the comic to further advertise what the toy could do. 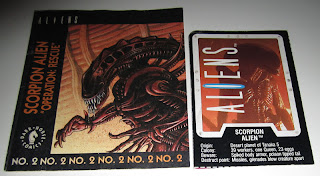 The second mini-comic came with the Scorpion Alien and was entitled "Operation: Rescue." Bishop and Hicks save Apone before he is attacked by a facehugger. There are some brief attacks by a Scorpion Alien and soon all hell breaks loose on the final pages as a very angry Alien Queen arrives. I was always a little creeped out by the Scorpion Alien. They just seemed so deadly. But then again, all of the aliens seemed deadly. Another interesting thing about these mini-comics was that each comic featured a different artist(s) and though there were some differences between each issue, overall, the theme and look of the story was consistent. 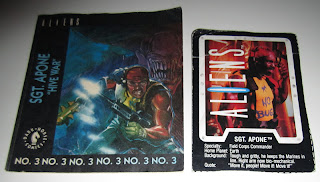 Sgt. Apone came with the third mini-comic. Called the "Hive War," I really enjoyed the cover art for this issue. The use of coloring and shading was really nice as well as the sparks from the gun. I also liked the Alien Queen head in the background. Anyways, the boys were in trouble from the previous issue. While facing a brutal attack by the Alien Queen, the Space Marines got a dose of help from (cue some cool music) Lt. Ripley! Ripley jumped in with a flamethrower and laid waste to the vile Queen. A battle ensued and the Space Marines leave feeling like they have vanquished the "threat." Of course like any good cliffhanger, the last page shows the Alien Queen's arm breaking through some rubble. Apparently you can't keep a good bug down. 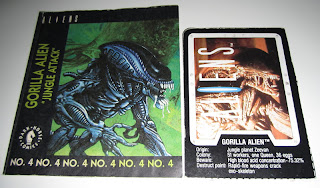 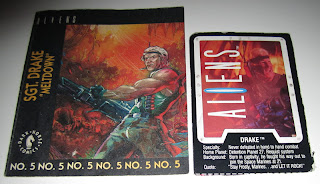 The conclusion to the jungle planet story occured in issue 5. "Meltdown" came with Drake and heavily featured the Space Marine and all his "let's rock" attitude. So the Space Marines find the source of the alien eggs while another battle occurs. One plot point that always drove me insane in this issue involved Ripley nearly getting hurt by an alien. She falls off a limb and lands in Apone's arms. I always was annoyed by that, because in my mind Ripley would have just landed on the ground and dusted herself off. She didn't need to fall into some man's arms. Ok, I'll stop before I start sounding like Vanessa Warfield. Anyways Bishop flies in with the evac ship to take care of the Alien Queen, which was such a cool part. The evac ship came with a large container at the back, so Bishop scooped the queen into the container and then dumped her in some lava. Such a cool way to explain what can be done with the evac ship toy! Anyways the Space Marines leave, patting their backs for a job well done. Only it wasn't a job well done. Some poor defenseless gorilla creature investigates a suspicious looking egg, and looks positively terrified as a facehugger jumps out aiming for the face. 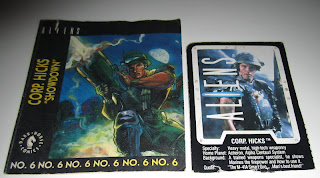 Issue 6 started my favorite story arc of the mini-comic series. Corp. Hicks came with "Showdown" a true tale of cowboys vs. aliens if there ever was one. The Space Marines find themselves on a new planet that resembles the old wild west to some extent. Everything was all rustic. Things seem ok at first until a rancher arrives freaking out. Something has been killing his cattle and it seems to be a bug. Soon enough the Space Marines catch on as a Bull Alien attacks. Utilizing all the cool features that came with the Hicks toy, the Space Marine eventually takes care of the Bull Alien. 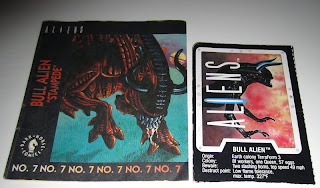 My first figure to own from the line was the Bull Alien. Not for any particular reason (I had actually wanted Ripley the most) but when this line first came out, I only recall seeing alien figure options only. The Space Marine figures were slowly released. Or the line was just super popular. Either way, "Stampede" was issue 7 and was so good. The artwork and mood for this mini-comic was truly creepy. The story opened up with the Space Marines riding in their Stinger XT-37s heading towards the hive. One panel showed the vehicles in the distance while some Bull Aliens menacingly look on. It was so creepy! Soon the Space Marines are attacked by a group of Bull Aliens. They drive and fire their way through until they reach the hive. Staring into the darkness, the brave Space Marines begin their new journey... 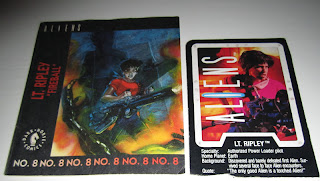 The final mini-comic was "Fireball" and came with Ripley. Issue 8 was also one of the best. The Space Marines walk into the hive (which was at this ranch type place.) Ripley finds a power loader, just like in the film. A slew of Bull Aliens come after the Space Marines. Ripley uses her flamethrower and eventually hops into the power loader to take care of some nasty bugs. Soon the Space Marines find themselves out numbered and the Alien Queen is not looking to play. In a surprise twist, Ripley tells the group to get ready and continue to fight. The reader is then told that the story is "to be continued... in your own imagination! I loved this. I just loved it. It was a nice way to leave everything up to the person playing with these fun toys. It also created problems for those who were obsessive about getting a nice wrapped up ending. I don't really recall what my continuation of the story was. I don't think I wanted to wrap it up, so I just created multiple endings. Sometimes a few characters would die, other times everyone would live to move on to the next bug infested planet. Either way I loved this toyline because I grew up really enjoying the Alien films. There was just something great about them. For me I would say that had to do with Ripley. If they had made Ripley a male character, I probably would not have felt such a strong connection to the series. Oh goodness, there I go again, releasing my inner Vanessa Warfield. You should all try and keep me quiet. As if I could ever hush.

Anyways, there is one last thing to look at before Toy Chest Tuesday comes to an end! Kenner also made a large Alien Queen action figure for the first series of Aliens toys. I lived for this figure. The Alien Queen was so grody and scary, but I couldn't get enough of it. Sadly Kenner did not release a mini-comic with that figure. I am guessing due to the deluxe nature of the queen. But here is a shot of her cool trading card that could be cut off on the back. 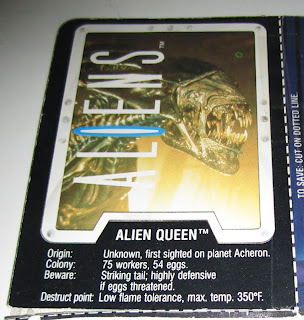 The trading cards for the Alien figures were so much fun, because they made mention of the destruct point. I thought it was inventive to have such different destruct points for each alien.

So be sure to also read over these file cards. There is fun information on them. I also hope that this Toy Chest is a great deal of fun for you all. Stay tuned though, because on Thursday I will be continuing this Toy Chest to show you the actual toys themselves! Also, if anyone is wondering, I am hoping to one day be able to scan every page of the mini-comics on here for your reading pleasure! They were a lot of fun.

That is about it for Toy Chest Tuesday! Until next time!
Posted by Michael Lynn P. at 5:09 PM