Let's be clear about today's Toy Chest Tuesday: it won't be completely riveting or exciting. However, in honor of the release of Snow White and the Huntsman I thought it best to look at some old Snow White toys. Before we get to the toys, let's talk about Snow White and the Hunstman for a bit, shall we? This was one of the most highly anticipated films on my own personal list of movies to watch this summer. After seeing it I must say it was wonderful. First of all it is nice to see Bella actually kick some butt. (Oh Kristen Stewart, please star in more movies like this!) Secondly is there anything Charlize Theron can't do? I aspire to be an Evil Queen now. It is my life's mission. I want pet ravens. I'm looking for ensemble outfits made up of feathers and bird bones. I'm even willing to eat a heart. Maybe two, but let's not get ahead of ourselves.

The movie was stunning as was the acting and overall storyline. What they did with the actors who played the dwarves was so cool. However all this awesomeness left me wanting a She-Ra movie. Badly. After seeing the magical forest with the Gollum fairies and other interesting flowers and animals, I just wanted to see the Whispering Woods in a live action film. Is that too much to ask? I am ready to see some more fantasy films with badass women running the joint.

Anyways, let's look at the toys! In ancient times McDonalds had a lovely relationship with Disney. Many Disney themed Happy Meal toys would be released celebrating some of the all time great Disney cartoons. Out in 1993, these Snow White toys featured the main cast though we'll only be looking at three. (I lost the dwarves. It happens.)

Up first is Snow White. 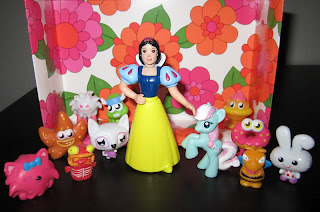 She originally came with a green wishing well, which I have apparently lost with the dwarves. (I am just slacking on this Toy Chest today!) As you can see, this is actually a really good Snow White toy. True, her poofy sleeves may be a tad supersized, but this was from a Happy Meal. Dimensions are not always perfect. Either way this little toy did capture the Disney version of Snow White. Her arms, waist, and head were also able to twist. A little articulation is never a bad thing!

Next we have the prince. 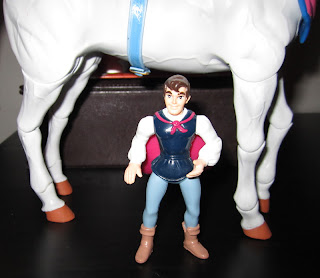 Do you know what they say about small princes that ride big horses? I hope nothing too tacky, because this guy actually came with a smaller in-scale horse, but like most things, the poor equine has been swallowed up by the archival room. So this sweet prince is now riding one pimped out flying unicorn. (Thank you Swiftwind for making an appearance.) Now here is the interesting thing about this figure, on the plastic packaging his name was simply Prince, and he came with a ride aptly named Horse. I thought Snow hooked up with Prince Charming? Who is Prince? Is she turning into a two timing apple eating hussy? Or just a protégé? Actually who even remembers the prince in these fairy tale stories anyway? It's all about the villain. Everyone knows that.

Which brings us to the next figure from the Happy Meal series: the Evil Queen. 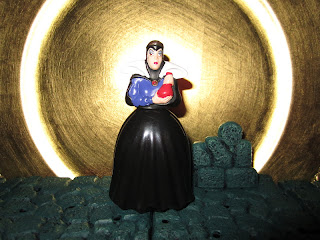 Mirror, mirror, on the wall, who's Snow White movie is the best of them all? 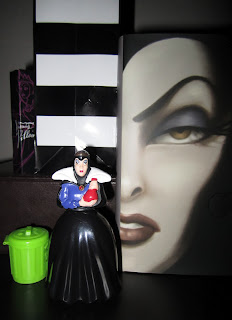 The Evil Queen was said to be inspired by Ms. Joan "no more wire hangers" Crawford for the Disney original (or so they say. Maybe Joan was inspired by her.) Her toy package from the Happy Meal had her listed as "the Double Trouble Queen/Witch" and she also talked to a mirror. Could she be anymore vain? (Judging by her own book release and a special edition MAC lip gloss, the answer is a resounding yes.) Out of the three Snow White toys, the Evil Queen was actually the coolest. She had a pretty fun feature that gave folks two toys in one. 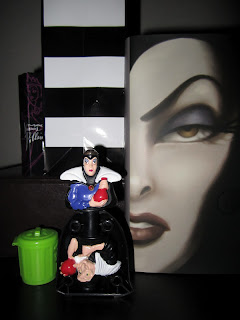 After removing the front half of the skirt, the Evil Queen had a separate piece with her old witch hag face. All that needed to be done next was flipping the Evil Queen over and showing off her new Botox-less face. 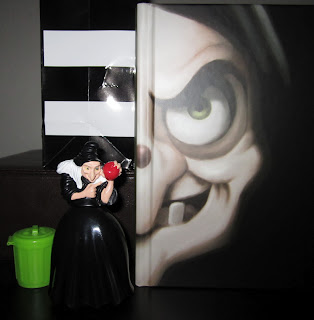 Here is the Evil Queen as an old witch. She wouldn't be complete without her poisonous apple. Of course what kind of message does that give to people. "Eating apples will put you into a deep sleep!" Was that clever propaganda to instill the fear of fruit in people or what?

So that is about it for a little sampling of some Snow White toys from yesteryear. Sort of sad right? I mean is that all we get? I really hope that the toy gods and goddesses hear my prayers and get to working on some really well sculpted Snow White and the Huntsman toys. I think everyone needs to own a plastic Chris Hemsworth. The world would truly be a better place. I also am dying for a Charlize inspired Evil Queen. I think that would just be the greatest thing ever. Seriously, run out and see that movie right now. I'm actually on my way to the pet store to pick up some ravens. I'm turning my house into a kooky castle and I will only bathe in milk. Ok, I'm partially joking because milk is grody. I'd rather eat a poisoned apple.

Enjoy this half assed Toy Chest Tuesday folks! I had plans for something else, but I just couldn't help but look back on some Snow White toys. Here's a hint for next week's Toy Chest. In keeping with the theme of summer movies, DiaryofaDorkette might be going deep into the vault for some Kenner goodness. In the archival room, no one can hear you scream. Until next time dear readers!
Posted by Michael Lynn P. at 1:59 PM