It is time for something new. For a whole year we have fawned over Heroic Hotties, with their bulging biceps and dashing good looks (I'm referring to you Lego Santa.) But what of the celebration of heroic women? If the multiplex was any indication, I don't think people would even realize that there are some wonderful heroic women who fill our lives with the possibility and hope to fulfill our own dreams of fantastic fantasies of adventure and thrills!

I was fortunate enough to sit down with one of the true icons of our time. This is a woman that helped tie my heart forever with a certain team of mutants, to which my life would be pretty dull without. I present to you all the January 2013 Woman of Wonderosity: Storm! 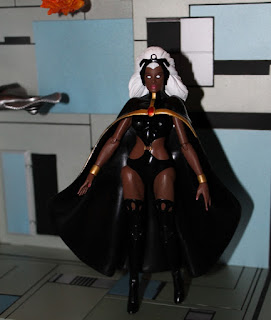 (This interview and photo shoot went down in the infamous Danger Room!)
Diary of a Dorkette: I just have to say, this is a big honor to be interviewing you. In many ways you were the reason I remotely paid attention to the X-Men. It was the early 90's and Toybiz had released a figure of you that was mostly in your likeness, and I just thought you were the coolest. I then ended up reading the X-books on a regular to semi-regular basis as opposed to picking up an issue every now and then.
Storm: By the goddess, that makes me feel old. And I do recall that first figure Toybiz made of me. Toy making has certainly come a long way. I remember some of the other gals from the Marvel Universe were jealous that Toybiz had not approached them first!
Diary: Speaking of the other women from the Marvel Universe, who do you keep up with now-a-days?
Storm: Well I have recently been working with Kitty Pryde a lot lately. Rogue and Betsy always know how to throw a good girl's night out. I of course miss Jean. I think of her often.
Diary: You two really were close, weren't you?
Storm: Yes. Our friendship was very important to me. I stood in her wedding! It all seems so long ago.
Diary: Well, there's always the next resurrection right?
Storm: Ha. We shall see.
Diary: So what else is going on? The monthly funny pages have been rattling all kinds of tales about you.
Storm: Of course. I've been dragged through the ringer as of late. An imminent divorce. An entire country hating me. (Wakanda) Going through another public phase of mutant discrimination. The loss of Professor Xavier. The list just goes on.
Diary: Oh that's right, your marriage to T'Challa doesn't seem to be faring so well. I'm sorry to hear that. I was really rooting for you two.
Storm: Yes, well marriage takes work. And when you have been through what we have, Avengers Vs. X-Men and the Phoenix Five... well I wish I could say we had been fighting over money or who was supposed to take out the trash.
Diary: So word on the street though is that you might be moving on from T'Challa. Care to comment?
Storm: By the goddess no! I don't know that I could ever move on from him. It may be complicated, but I do truly love him.
Diary: Maybe so, but... girl to girl, if you were going to date someone new, who would you go for?
Storm: Oh I have not thought about something like that. Though I suppose I'd try to understand the long buried flirtation I have had with Wolverine. But that would just be ridiculous.

(After this interview was recorded, Diary of a Dorkette got an exclusive scoop with this photo, scroll below for the juicy dirt!) 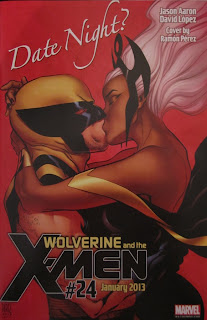 Diary: So enough of the personal prying into your busy (and hectic) life, I thought it would be fun to really look back on some lovely photos of your wonderosity!
Storm: Oh do I really want to do this?
Diary: Of course! You have led one amazing life, so Storm, take a look back at your life! 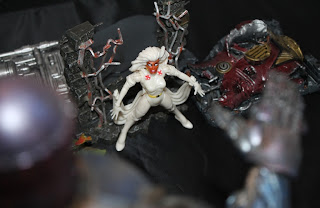 Storm: Oh yes, I remember this. One of the numerous times that Sentinels had trashed the X-Mansion. You just have to love technology that can capture high res images while also wanting to kill you simultaneously.
Diary: But you seemed so determined to kick ass even under such dire circumstances.
Storm: I'm a member of the X-Men. We have never backed down from a fight.
Diary: Alright, ready for the next flashback? 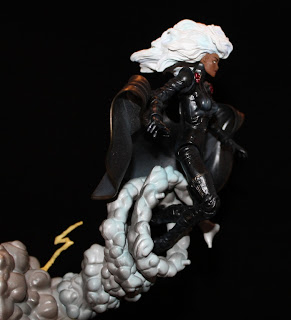 Storm: Oh that black jumpsuit. How many times have I been captured in that black jumpsuit! I recall this photo very vividly. Rogue and I were flying in the air traveling to some event or other, and unbeknownst to me she snapped a picture of me! Would you just look at that mane of hair?!
Diary: Oh, that's nothing! Check this out... 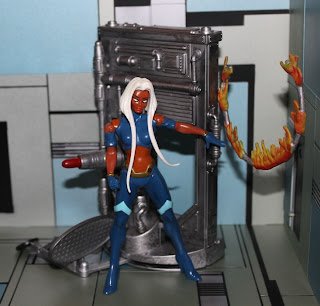 Diary: Can I just say I totally copied this hair style when I was a teen? I loved the short bob with the long stems. I thought it was just the hippest look.
Storm:Yes, but after looking at this photo more closely, having those long stems was probably not the best thing since I was so close to those flames...
Diary: The dangers of the Danger Room right? I must ask though, you've sported many hair styles, which one was your favorite? Many of your fans are partial to the mohawk.
Storm: Oh the question about my hair. I can't tell you how many times I have been asked that. I don't think the male members of the X-Men ever get asked about their hair.
Diary: To be fair Storm, Wolverine has been sporting the same hair style since the seventies.
Storm: True. To answer the question though, I am fond of the mohawk. It was perfect for that time. 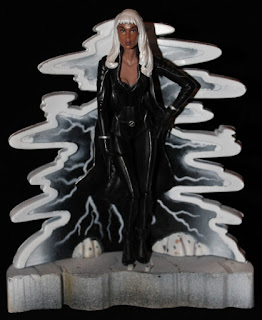 Diary: Can you share any memories of your time on film? I think a lot of people were thrilled to see you in a movie!
Storm: Yes, that was a very fun time. Halle Berry was just sublime playing as me. I was lucky to have my character appear in all three. My hopes have always been for more opportunities to appear in movies. I find it to be very important for strong female super heroes to have screen time too. After all, girls need someone to look up to.
Diary: Of course, I couldn't agree more. Also, on a quick side note, what was it like meeting Hugh Jackman? Is he a dream in real life?
Storm: By the goddess as I live and breath. That man is indeed a dream come true.
Diary: I am so jealous. So next picture! 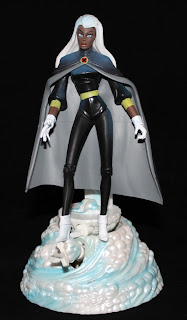 Storm: Oh of course! This was a very nice look. A lot of people were surprised to see this sort of look on me. I also like it because there are few photos of me taken with my pupils showing. 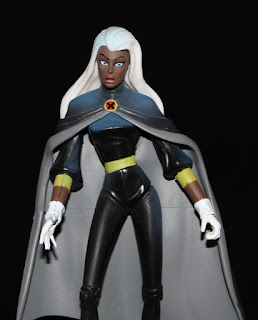 Diary: This was a good look on you. Tell me, do you have a favorite memory or story to tell about your time with the X-Men?
Storm: There are so many. I'm not even sure where to start. To be fair, I won't pick one that involved me. I will instead say the would-be wedding of Polaris and Havok is one of my favorites. My goodness she sure went off the deep end that time, didn't she?
Diary: Yes, that was something else! Talk about hiding the cutlery. 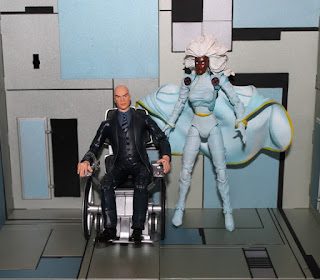 Diary: Now this might be a sad photo to look at, but I couldn't really come across anything more recent.
Storm: I do miss that man very much. His passing has been hard on all of us. Scott certainly changed things within our little piece of the world. I don't know what it will ultimately be like without Charles to be there with his wisdom. It seems like that wisdom part is going to be up to us now. 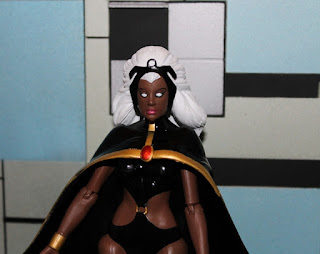 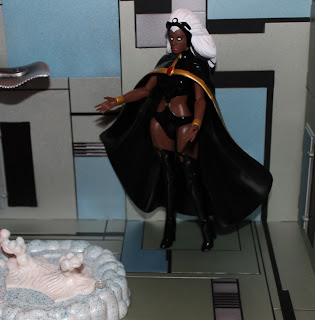 Storm: Nothing a quick wind storm couldn't fix! Come on Miss M, you must be ready for anything if you are going to spend time with a member of the X-Men.
Diary: You're telling me. So you are the January Woman of Wonderosity! It was a pleasure getting to talk with you Storm.
Storm: This was very wonderful! And please, call me Ororo.
Diary: I would be so honored! Any last words?
Storm: Oh yes, I would like to add one more thing. I and the other members of the X-Men are all wishing Peter David a speedy and healthy recovery. I know he has been very busy with X-Factor as of late, but his recent health concerns have been on all of our minds.
Diary: And mine too. Thank you very much for being a part of this!
Storm: And thank you, I just love your musings.
There you have it folks! A look at the first Woman of Wonderosity of 2013! Enjoy, and for those who were hoping for a Toy Chest Tuesday, have no fear. Trips to the archival room will resume next week. And don't forget, there will be some new fun things coming up for the rest of January, so stay tuned! Take care everyone.
Posted by Michael Lynn P. at 9:29 PM