Cue the music! Let in the marching band! Light the fireworks! It is time for an all new Toy Chest Tuesday! The New Year is bringing forth all new toy flashbacks that will make your head spin! So let's get started. Today's Toy Chest deals with a toy line that I just loved collecting as a kid. Sweet Secrets was one of those lines that had everything: packaging I could look at for hours, cute looking toys that went from humans to cute little animals, and a world of imagination at my fingertips. I mean there was just so much to like.

Released by Galoob in the 80's, Sweet Secrets were called "adorable transformables." They were basically Transformers for girls. Unlike Transformers though, Sweet Secrets were all about various themes. Like there was a stationary wave where notepads turned into cute little play sets while the accompanying pen would turn into a fun character. Most of the waves involved toy jewelry becoming a cute figure to play with. One such wave of Sweet Secrets was the Electronic Rock 'n Lockets set. So let's check out some pictures! 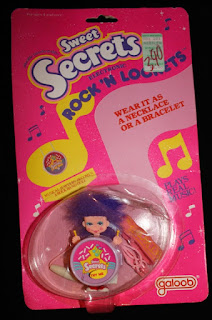 The Rock 'n Lockets came out towards the end of the Sweet Secrets run and each character transformed into a musical instrument that played music and could be worn as a necklace or bracelet. Oh and the best part was that the characters looked like a fun New Wave band. But let's just check out the packaging. It was very simple. I find it so funny how toys are packaged these days. Now there are so many layers of plastic and other deterrents from actually removing the toy and back then it was just a simple bubble. Nothing else. And aside from that, I do have to say that the font for Sweet Secrets is one of my favorites. I love the way the letters look with the pink and yellow outline. Of course all the pink doesn't hurt either. 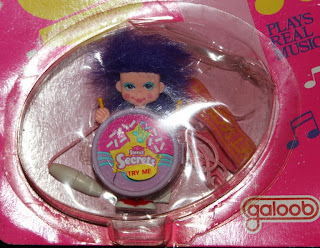 This gal's name was Beata Drum, a very clever play on music fun. She had "loud" makeup but her hair was the best. It was hard to capture a picture of it, but there is this big mane of purple hair with some lighter purple tufts of hair at the sides. It had a very Jem and the Holograms feel to it. And as for the song that Beata Drum played, well don't get too excited, it was just a simple rendition of Happy Birthday. Totally rock 'n roll. 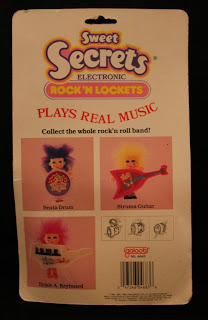 The other items to collect in this series were equally cool. There were only three toys to collect and I wish there had been more. The possibilities could have gone on and on. There could have been a cool sound stage play set along with other types of transformable musical equipment, like speakers or a microphone. 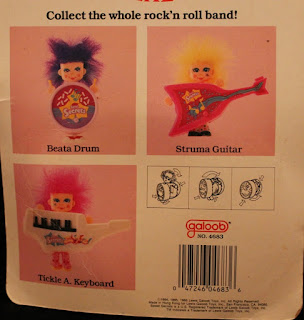 This picture shows a slight better version of Beata's hair. There was also a little diagram that explained how Beata Drum's transforming feature worked. The other two characters were slightly different. Struma Guitar and Tickle A. Keyboard each had a cool star on their cheeks as opposed to the different hair like Beata Drum. Each instrument also had a wild and zany design sticker too. I just love how these look. If Tickle A. Keyboard seems familiar, she should be. She has been featured as part of a "Best of" Toy Chest Compilation in the past. 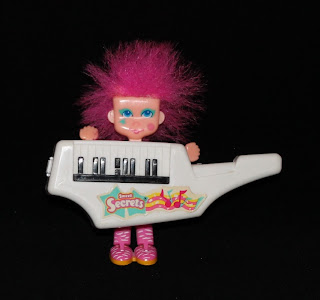 Tickle A. Keyboard has a very interesting story. I had a good number of Sweet Secrets. I loved these and thought they were so much fun, but many of them have been lost through the course of time. (Damn time.) So a few years ago I stumbled upon Tickle by strange coincidence.  I had long searched for this old toy, but had basically given up on it. Anyways, this story occurred a few years ago. (Isn't there always a story involved with one of my old toys?) So I was helping my mom in the kitchen. We were going through the kitchen cabinets and trying to find old antique plates and all kinds of other stuff at the very top kitchen shelves that had not been used in a long while. Well I was taking some old plates down and low and behold, Miss Keyboard was just loungin' around on a plate! She had been there for a very long time.

Apparently ages ago I did something incredibly rotten to annoy my mom and as punishment she took the Sweet Secret and placed her in the cabinet! We must have both forgotten about her when I finally decided to act better! Who would have thought I'd find her so many years later? This makes me wonder what else I have owned that got taken away and hidden somewhere. What a mess. The saddest thing of all is that I have so much old crap on my check list that there is no telling where everything could actually be. (I mean I'm not the only one with a check list right? The old toy check list wherein I have to find certain things that are still missing from my convoluted youth? You all do this, right?) 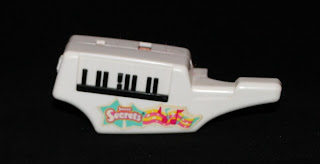 Here is what Tickle A. Keyboard looks like all folded up. I'm missing the string to loop through on the back, but I think it is a fun little toy. One of the keys is the button for the music. I need to purchase some batteries to see if the music still works.
The history of this line was very interesting as well. Galoob ended the Sweet Secrets line by the end of the 80's, but from my searches on the secondary market, it appears that there was a toy company that reissued some of the older Sweet Secrets items in the mid to late 90's, but I have not found much information on that. Nor do I even recall seeing this line of reissues in stores. And Sweet Secrets were brought back in an updated sort of way about four or five years ago. They were not able to hold the same charm as these older and far superior Sweet Secrets though!
So that is about it for talk of Sweet Secrets. They will more than likely make another appearance in a future Toy Chest Tuesday, but for now just enjoy the Sweet Secrets Rock 'n Lockets! Did anyone else have these or remember them? Let the toy talk commence! And be sure to keep it here, there is more fun right around the corner!
Posted by Michael Lynn P. at 6:52 PM