The First Time, Ever I Saw Your Face...

Ok so the latest assignment for the League of Extraordinary Bloggers is to talk about:

It feels like the first time… Write about your first experience with something.

So let's take a wild guess as to what I will be talking about...


Before we get into the topic, I know I have not been posting as much as I'd like this week. After all, something super fun is coming up that I am really ready to post about, so expect some more posting soon. This week has seen me with a first experience though. I had this mole on the side of my breast that had been irritating me for some time now, and I had it removed. Like I'm not the kinda girl that is all into gross things, but I am used to needles and stuff, so I totally watched the process of the mole removal. Like first the area was injected with a fluid to puff the mole up. The needle used for this part was kinda like the needles used for Botox and other fillers, so I know when I am one day ready to have my face injected with toxins, I will be able to handle it. After that a razor was used to cut the mole off. It looked more like a slight sawing technique. There was a bit of back and forth. I swear this was not done in some back alley. Besides, I didn't really feel anything at the time.

However, the whole point of why I am even bringing this up is because after the mole was sawed off, the area has now become all bruised and grody and totally looks like a zombie bit my boob. I'm now planning on striking while the iron is hot and joining the Walking Dead as a zombie character that may or may not end up involved in a very delicious love story. With that particular brand of humor behind us now, let us talk about first experiences.

So I do have something perfect to share involving a first experience, and that is my first time meeting She-Ra. I know this must come as a big shock that I am talking about She-Ra yet again, but all roads always lead to She-Ra.

My birthday is in April, but every now and then I'd have family from out of town visit during the summer and sometimes they would bring with them a belated birthday gift for me. Now I don't know if my parents informed them what I was interested in or if they just knew, but this particular summer I am referring to saw me receiving a gift that would change my life forever.

Like most kids in the 80's I loved me some He-Man. The cartoon was fun and interesting. I wasn't super big on the toys, but I had a Teela and Evil-Lyn as well as the main star. Everybody had something from Masters of the Universe back then. Everyone. Also, times were really different in those days, because we didn't have the mystical Internets or the wisdom of the Toy Gods bestowing us with the latest items we'd all be coveting. I found out about the latest toys from either commercials or going into a store.

So the Secret of the Sword had been out and I was painted intrigued by this She-Ra character. I knew there were toys, but for the life of me I either couldn't find them in stores or my parents were like, "You just had a birthday. Go play with your Barbie dolls." I wish I could remember exactly all the events at the time. I just know I really liked She-Ra and I hoped that I'd somehow end up with at least one of the items from the line in my life. Either way my aunt, uncle, and cousins from out of town had a gift for me.

Having no idea what it was, I opened it up very curious to see what was underneath all the nice wrapping paper. It was a department store box that looked to have clothes in it. I was slightly nervous about opening up clothes. I was what you'd call a lazy child in terms of clothing back then. I hated wearing fussy ensembles. Nothing was better than wearing a long over sized sleep shirt and jellies. Hell, if I could get away with wearing that type of outfit today I would.

So upon opening the mysterious box, my heart skipped a beat and I was beyond overjoyed at what I saw! The first thing that caught my eye was that awesome purple and pink cardback followed by that bright lettering leaping off the card at me. Then my eyes rested on the crystal clear bubble housing none other than She-Ra in all her magnificence. Bow was there too! My aunt had said, "I heard you were a fan of her, so I thought you'd like her and a friend too." I was ecstatic. I couldn't stop looking at them both.

My eyes were just transfixed on She-Ra. There just seemed to be so many possibilities waiting right behind that little plastic bubble. I studied everything she came with: a cape, sword, skirt, comb, and a comic! But the one thing that caught my eye was an extra item; included with She-Ra was a promotional She-Ra necklace. It was everything for me. I felt like I too could be She-Ra. Of course then there was Bow with his magical beating heart feature. That feature was just the coolest thing.

I instantly made them boyfriend and girlfriend, and together they went with me everywhere. Car trips to the store or out to dinner or to visit family were not complete if I didn't have She-Ra with me. Watching cartoons just wasn't the same if She-Ra wasn't sitting right there on the couch too. Bouncing from hospital to hospital when I was first being diagnosed with my genetic disorder seemed a little less scary because She-Ra was always right there. When my baby brother was born I made sure even he knew who She-Ra and all her friends were. Together we saved the world, had glamorous parties, found love (though there was that one time when She-Ra dated Lion-O and Bow had a fling with Catra, but that is all for another day.) It was always so much fun.

For some reason or another, She-Ra has just become ingrained into my life, and she always will. So that is my first experience meeting She-Ra. The best part was that I also ended up meeting all of her cool friends, and well, the rest is history.

Here are some pictures of my She-Ra and Bow, 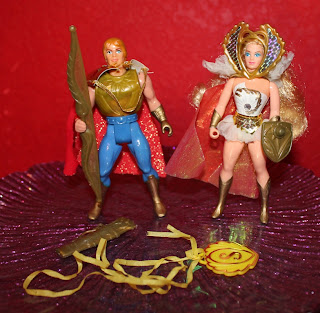 Here they are. They both have some mileage on them. The elastic on the capes aren't as good as they used to be. 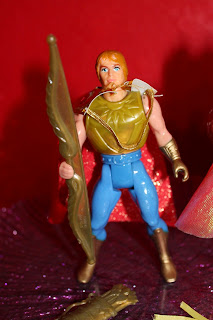 Bow's cape is actually much worse than She-Ra's. I don't know exactly how this came to be, but it still has the sparkle and shine to it. 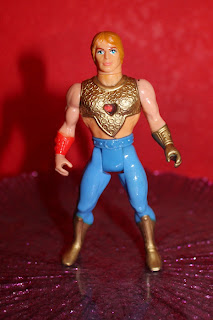 With the chest piece removed, Bow's heart can be seen. Oh I just love that heart feature. I used to think that was how you knew you had found your true love: when your heart beat funny. As an adult I realize that a funny beating heart might be a health condition or indigestion. Also, Bow's gold paint got a new coat a few years ago as it had stated turning green. Now he looks relatively new! 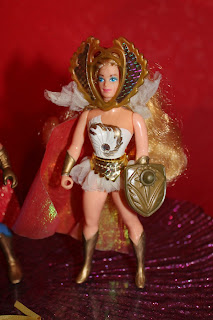 She-Ra's skirt was much longer, but with all our adventures it had gotten a little shorter. I also have her sword someplace else. I don't know where I misplaced it, but I know I had seen it recently. I lose track of stuff way too easily. 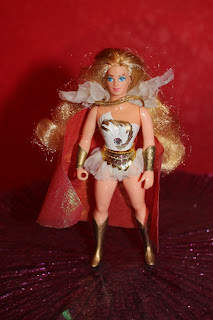 Like Bow, She-Ra also got the new-coat-of-gold treatment, however I botched the swirled design on her bodice. I guess it doesn't look bad from afar, but up close, it is a mess. Full on Monet. 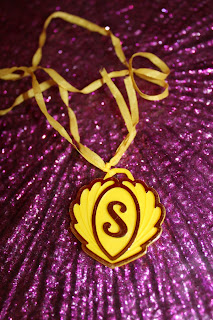 Finally, the She-Ra necklace! Some girls may need diamonds, but I say, give me a plastic piece of She-Ra necklace any day!
Wanna know about other folk's first experiences?
-Chris talks about his first time at Disneyland
-There is one good thing that comes out of the Goodwill Geek attending an a-hole's birthday...
-George discusses his firsts to two very important places for all dorky folk...
-For some reason I can't read Erik's first, but it seems really good. If anything check out his blog, he is very talented.
-Take Jathniel out to a ball game with his first experience
-Cowabunga! Ashley talks turtles!
-Over at Poprewind, Lee and Linz look at their first video games
-Big J has a license to drive as he talks about his first car!
That's about it for today. I hope everyone is doing well, and be sure to come back. I have some fun stuff in store for the rest of July!
Posted by Michael Lynn P. at 3:43 PM