Toy Chest Tuesday! Saban's Tenko and the Guardians of the Magic!

Have you ever wondered what She-Ra action dolls would have looked like had they gotten a release in the 90s? Well read on dear readers for a fun look back with this week's Toy Chest Tuesday!


In 1995 my collecting was iffy at best. I had an attitude that was as rotten as Sour Grapes. My nose was in a book or playing a Final Fantasy game, though I was constantly dreaming of making friends and being cool. (Some of us just aren't meant to be cool. Like ever.) With that said, I ended up missing out on some cool toys that came out during that time since I was trying to become more grown up. Take for instance Saban's Tenko and the Guardians of the Magic, a cartoon based off of real life magician Princess Tenko. It was very short lived, very blink and you'd miss it kinda stuff. However the show was fun and there was of course a toy line to it. I recently stumbled upon some Tenko items that reminded me of how much I would have actually collected the items had I not been so dumb and angsty. Upon acquiring these items I couldn't help but notice how similar they were to She-Ra! Let's look! 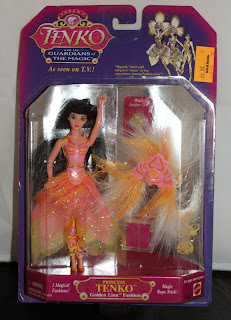 Here is the star of the show, Princess Tenko! If you squint this is simply Catra in a Fantastic Fashion. Go ahead, squint. See what I mean? Ok, maybe not exactly, but close! These fashion dolls were something special. They were a little over 6 inches and had rooted hair with real clothing. Their articulation was very similar to She-Ra items, except slightly improved. Mattel really took what was great about She-Ra and expanded upon it. The heads had "Barbie" movement, but not in a loose way. The legs also had ball jointed hips. Unlike She-Ra though, Tenko and her friends were not sword fighting warrior women dressed in high fashion. They were dedicated magicians and sort of circus folk that were all about magic tricks, while dressed in high fashion. 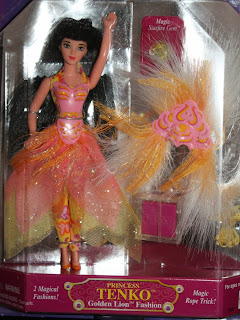 The fashions for each of the dolls were amazing. The detail and flair to these items were spectacular! Look at all that detail! Since Tenko was the main character, she got released in three different outfits. This version also comes with a magic trick item, extra fashions, and a Magic Starfire Gem. Each magical gem had special powers that were attached to animals. 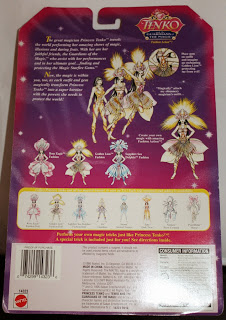 Here is the back of the card. A great deal of information is given on Princess Tenko. There is a bit of information on the show as well as exquisite drawings of the various items to collect, which reminds me instantly of the vintage She-Ra packaging. 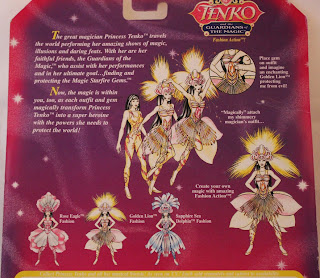 Each character has three looks per doll. The basic jump suit, the added fashion and mask/headdress, and finally the gem attached to the fashion. (More on that in a second.) The different Tenkos to collect ranged from the Rose Eagle (a very pretty hot pink confection) the Golden Lion (shown) and the Sapphire Sea Dolphin fashion which is full of stunning blues. I think these renderings of the characters make the line look even more magical.

Here is the line up of the Tenko fashion dolls. The line was incredibly small. Three Tenkos, followed by two friends and one villain. There were two animals though, a snow leopard named Ninjara (love that name) and a horse named Pearl Rider. Let's see a fancy looking cat and a majestic horse? This should have been a She-Ra reboot line all the way! 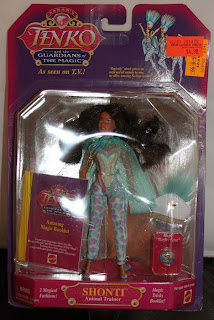 Up next is Shonti, a faithful friend to Princess Tenko. Shonti is also able to communicate with animals and fills in the role of animal trainer with the group. She comes with magical fashions, a Magic Starfire Gem, and a Magic Booklet. 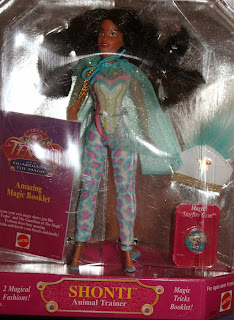 Shonti features the same articulation like Princess Tenko, though her outfit is not as wild and feathery. Her cape is very cool though. The attention to detail on these outfits was very nice. Even though Shonti has a more basic looking fashion, there is so much detail to these fashion dolls. I know that we all love the way She-Ra and her friends have been represented in the MOTUC line, but if Mattel were to ever release a fashion action doll type line for She-Ra, I would want it to be something like this. 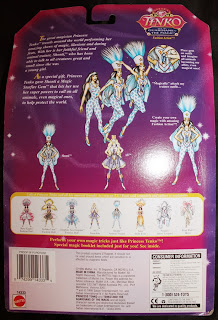 The back of her card is very similar to Princess Tenko. Her ability to communicate with animals was cool and made her a valuable character. I remember her being a very kind and caring person too. Now I realize that a show about magic and such sounds boring, but there was a lot of action in the cartoon. It is a shame the cartoon never took on, I would have enjoyed to see what else Mattel would have released in the line. 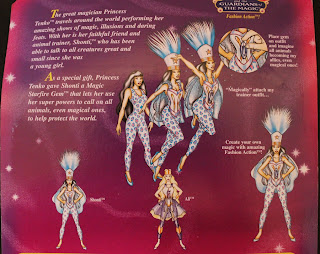 There is nice movement with these drawings. I know I must sound like I am on repeat, but even with the "attaching magical gem" feature, this line seemed like such a nice nod to She-Ra. I know they had nothing to do with each other, but creatively there are just shades of similarities. 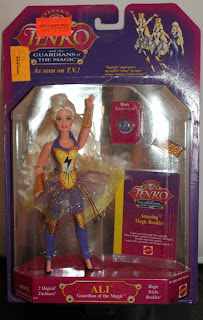 Ali is Princess Tenko's assistant and sort of like a little sister. Out of all the characters, Ali looks like she could be a mystical warrior or something. Her accessories are like that of Shonti, two fashions, the gem, and a booklet. 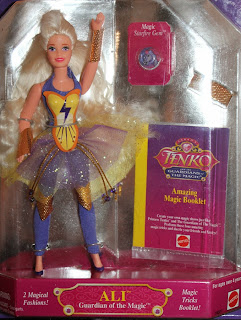 Her headdress is just a simple band, but Ali makes up for that with some fun hair. The hair is pulled back, but there is a tuft that sticks out like a fauxhawk. From what I remember, she was sort of an impetuous character which reminds me of Glimmer. 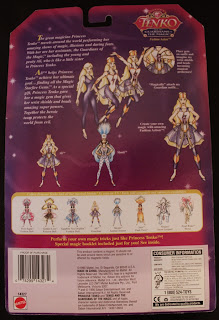 As you can see, the back of the card is similar aside for the drawings of Ali taking over the space. 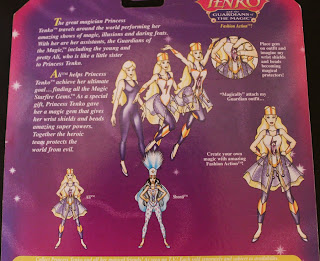 Her bio doesn't really detail her personality, though her powers are discussed. Her wrist shield and skirt act like a sort of magical protection shield, and I want to say that the lightening bolt on her chest was to represent her being very fast. 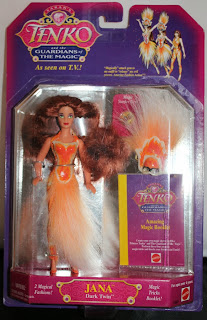 The last fashion doll is Jana, the Dark Twin! She is the villain, but she doesn't really look like a villain now does she? I'd say she was Castaspella after wiping off some teal eye shadow. Jana's outfit is one of my favorites. It is very Las Vegas showgirl. Like Shonti and Ali, she comes with her fashion, gem, and booklet. 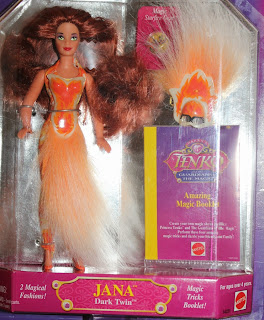 This is totally Vegas showgirl, right? Like evil magician meets showgirl. I'd try to rule the world too if I had a headdress like that. 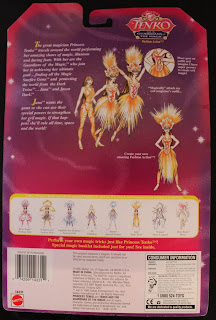 Poor Jana. The back of her card is like all the others, but only Jana is featured. 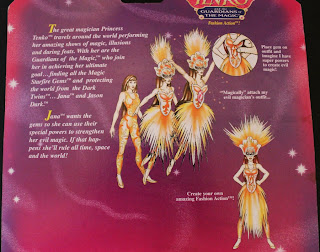 Jana wants to rule the world with evil magic! But not just the world, she also wants to rule all of time and space too! I think she'd make the perfect love match with Hordak. They both seem to carry the same priorities. Also not shown (because he wasn't made) is Jana's brother Jason. They worked as a team of evil twins and together they carry a long standing tradition of a brother and sister duo working together, for good or bad. 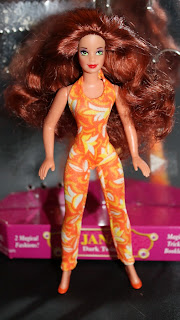 Here we have Jana out of her package. The jumpsuits on these fashion dolls have such fun patterns and prints. The outfit snaps in the back at the neck. Her shoes are molded on and since they look so dainty, it would seem like Jana would be able to stand on her. However, she has good balancing skills. (I for sure thought that massive head of hair would topple her over.) 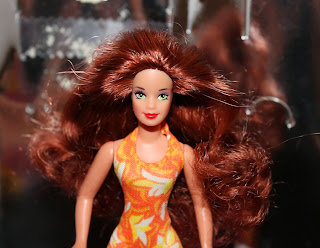 The face is pretty, but not as wild looking as similar items released a decade before. This reminds me of a difference in toys from the 80s and 90s. During the reign of She-Ra, Jem, and Strawberry Shortcake, girls had wild colored hair and loud make up. The 90s were a simpler time when most toys had natural hair colors and such. 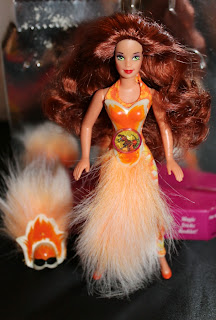 Here is the excitement! The fashion pieces are very easy to put on. The fancy bodice with fluffy skirt simply snaps onto Jana's chest via a hidden magnetic feature! Isn't that the coolest thing ever? The same thing goes for the magic gem, it just snaps on. That is such a cool and magical feature. The mask though is a different story. I was too nervous to place it on her as the elastic band on the back has not aged really well. The last thing I want to do is break anything. 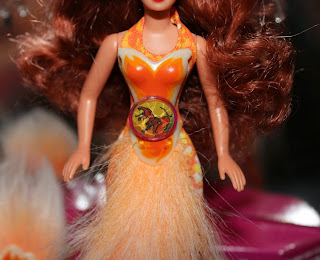 The magical gem stays on pretty well too. It doesn't slide or shake off. Jana's gem has twin serpents slithering about. An absolute perfect image! 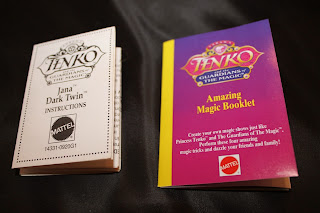 The last piece to come with Jana was the Amazing Magic Booklet. (A set of instructions were also included, but only to explain the fashions.) The booklet contains four different magic tricks. 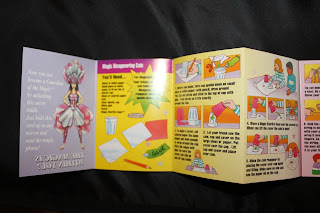 The first magic trick is the Magic Disappearing Coin! Out of all of them, this seems the easiest to do. 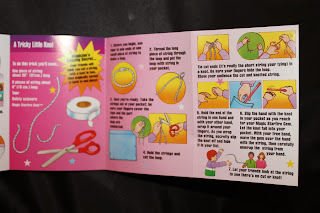 Second is A Tricky Little Knot. This one seems very tricky. 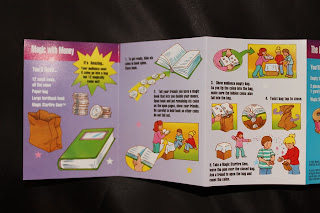 Followed by Magic With Money (I could use that magic trick for sure.) 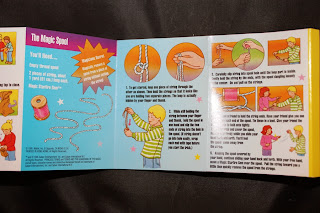 And finally The Magic Spool! (This one seems very difficult. I'm bad with tying things.)
I've never really been one for magic. I'm terrible with telling a joke and performing magic tricks, but I do like the idea of magic. Tenko and the Guardians of the Magic was a fun little slice of pop culture that really tried to make magic tricks popular for a whole new generation. Magic coupled with a toy line that resembled She-Ra, well how could this not be something cool? I can only hope that something like this comes back to stores. I like a fashion doll type line featuring items in a 6 inch scale. That style of toy is certainly a rarity in the girl's aisle, but it should not be forgotten.
Did anyone else like Tenko? Share your memories. And be sure to keep it here, I have all kinds of fun stuff coming up this week. Oh, and if you are still wanting to get in on all of the vintage toy fun from my collection, head over to Nerd Society. I take yet another look back at Mermista and wish with all my heart that we see an all new Mermista at the 2013 San Diego Comic Con. Hope all is well with everyone!
Posted by Michael Lynn P. at 5:38 PM