In order to make up for the hodge podge Toy Chest Tuesday from last week, get ready for an all new epic sized Toy Chest!


I have mentioned my brother before on here numerous times. After all, we've been into stores together where we have traveled back in time and he helped find my old vintage Glimmer. Needless to say there have been numerous toy memories shared between us. As an adult he is not really big on toy collecting like I am, but he does appreciate the toys from our youth. There were certain toy lines that I collected and there were some that only he collected (hello Snailiens), but then there were the toy lines that we both found ourselves super excited for. Take for example Fox's Peter Pan and the Pirates. Back in 1990 Fox and THQ, Inc released a cartoon and toy line based on the story of Peter Pan. It was a slight departure from the Disney version of the story but contained many elements of the loved tale by J.M. Barrie. There was more emphasis placed on the pirates as well as all the Lost Boys and such. Aside from the story, there were also differences visually in this animated series. Like with most animated series, the toy line was the best part. Let's look! 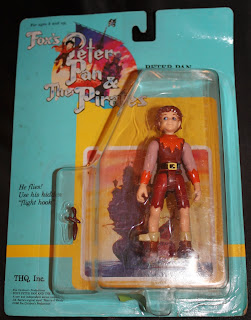 Here is the star of the show, Peter Pan! As you can see, this is nothing like the popular Disney version of Peter Pan. Gone is all the green and cap. This Peter Pan looks... raggedy. That was the theme though of the 90's. Peter Pan was all over the place, on television and in the movies, and the world was wanting him to be raggedy, not some whimsical clean cut dude that could pass for Link's cousin. No, no, no, the 90's wanted to make Peter Pan a darker more tortured soul, much like the 2000's did with that scamp Bruce Wayne. 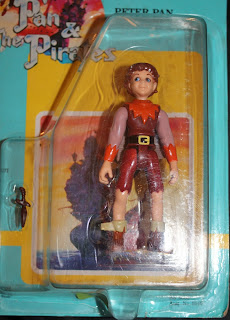 Fox's Peter Pan came with the usual points of articulation for a small figure of this scale. He moves at the neck, shoulders, and hips. His cloth cape is real and comes with a dagger which can slide into his right boot. Also hidden behind Peter is a hook that when strung can allow him the appearance of flight. It was a nice feature and something that gave my brother endless amounts of fun. We both collected this line, but he was the one who ended up with most of the toys. He had Peter Pan, Captain Hook, and Tinker Bell. 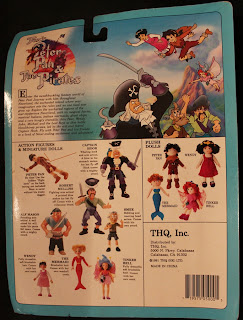 Flipping the card over, there are three distinct areas. First is a panel regarding the storyline of the show with an image of the animated series. Below that panel are the two different areas of items for release. 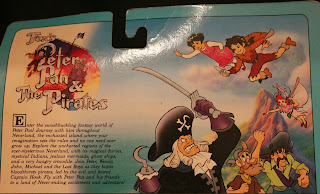 The storyline is very exciting. I have never been a big fan of Peter Pan as a story, I was more of a Little Mermaid kinda gal. But Fox's Peter Pan and the Pirates was a very interesting take on Peter Pan. The characters were interesting, but it was of course the toy line that made it all so interesting. 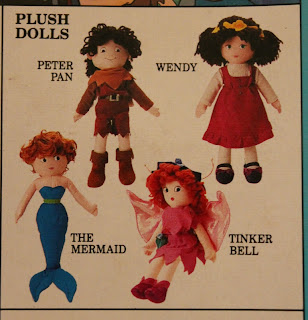 The toy line was very interesting. There were action figures of course, but there were also plush dolls. I don't think we ever saw these in the stores, but they did look interesting. Honestly though, aside from Care Bears, I was never big on plush toys. I just felt like there wasn't much to do with a plush toy. Although I must say, a Captain Hook plush would have been cool. 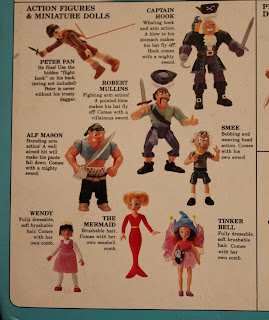 As evidenced by the line up of figures, this was a very interesting toy line. There was a little something for everyone. Pirates with swords as well as some action dolls with rooted hair. It was a very fun line to collect because it did have so many different aspects to it. I think this was another reason why my brother and I enjoyed collecting it so much. It must be noted though that this line ended as soon as it arrived. Another point of interest was also the Mermaid figure. (She was obviously the one I had) but the image of the Mermaid on the back of the card was far different than what was actually released. More on that in a second though. 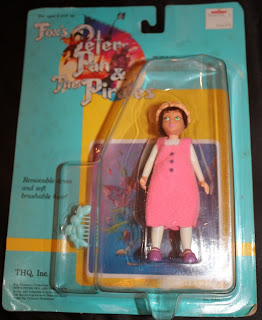 Wendy was a rarer item to find in stores and was one that neither my brother or I could ever find. She came with a removable cloth dress and comb. Wendy was also one of the few heroes of the line to be released. Her hair is also brushable, but let's be clear, the quality of the rooted hair is not the best. 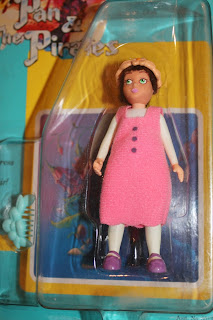 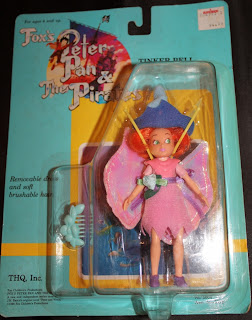 Up next is Tinker Bell. Like the other characters from this series, Tinker Bell looked nothing like her Disney counterpart. Much like Wendy, Tinker Bell came with real clothing that could be changed as well as rooted hair and a comb (the comb was the same packed with Wendy.) Her wings could be removed with a little Velcro patch. Also, she had yellow antennae connected to her back. 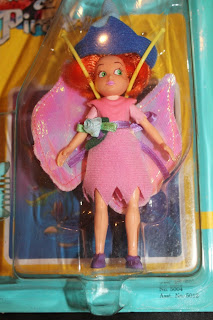 Her wing material was made up of shiny crinkle material. I love that kinda material! If I could wear nothing but that material I would, but as a woman of a particular age, I realize that is not about to happen. Tinker Bell was the most embellished of the Peter Pan toys. With the hat, wings, skirt and antennae this was a very detailed figure! I also love the brightness of her orange hair. 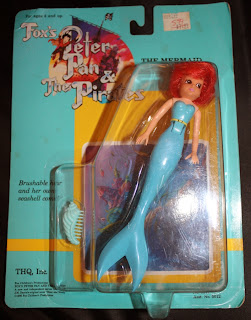 Finally we have my personal favorite from the line, the Mermaid! Of course, this is not Ariel. The Mermaids from this line were sort of bad, or at the very least had really crappy qualities. They were incredibly vain and didn't like most people. (In other words, what I will be like when I'm 70.) The Mermaid figure only came with a comb and rooted hair. But! She is a mermaid, and that alone makes this a cool figure! 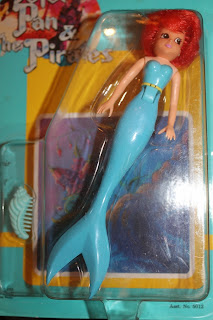 Her tail was really long, and don't worry, your eyes aren't playing tricks on you. This Mermaid looks nothing like the Mermaid from above. I was younger when this line came out so I was not really aware of items being different on packaging, so I always thought there was a blue mermaid and a red mermaid on shelves. My brother and I would look and look for that damn red mermaid! And she didn't even exist. 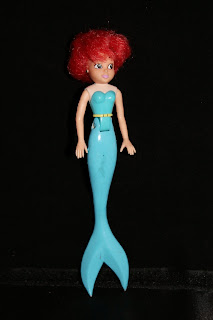 So I have shown you all mint items that I recently picked up, but here is my actual Mermaid from the toy line that I got way back when. There wasn't much to her at all, but she was a fun toy. Although I have to say, her rooted her leaves much to be desired. I think this toy line had some of the worst rooted hair in toy history. 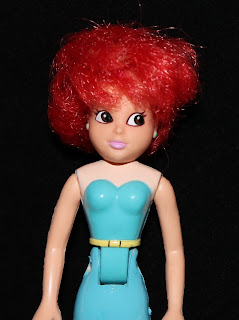 This closer shot shows off the fried hair of the mermaid but also just the simple look of this toy line. (I must say though, would it have killed Fox to give the girl a neck?) Anyways, it was a really fun line that I greatly enjoyed collecting. My brother still has his Peter Pan products at my parent's home, and maybe one day I will snap some pictures of them and post them here. For now enjoy these old toys, and since I am looking back on a fun toy line that my brother and I collected, I thought I'd also share a picture of my brother and me. I am asked every now and then about how he is and so I thought I'd share this for you all. It was taken a few months ago on my birthday: 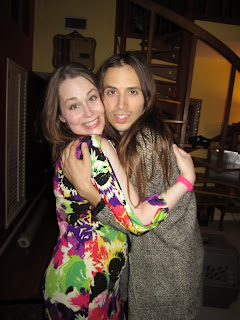 Anyways, I hope you are all doing well, and get ready! All kinds of fun things are coming up. Next week is SDCC and the Conference of Evil, but there is gonna be a lot of good stuff beforehand. So get ready folks! Things are gonna get real dorky.
Posted by Michael Lynn P. at 4:48 PM