The heat of summer is at an all time high thanks to August's 2012 Heroic Hottie! Diary of a Dorkette sat down with one bodacious reptile to discuss the past, the present, and the future. Let's celebrate the classic Michelangelo: the latest Heroic Hottie!

Where you've seen him... As the wild fun loving turtle of the Teenage Mutant Ninja Turtles, Michelangelo (nicknamed Mike or Mikey) has helped fight all manners of evil vile beings. Most notably Shredder, leader of the Foot Clan. "That dude is worse than a pizza without anchovies." Michelangelo has appeared with his brothers in comics, cartoons, movies, and toy shelves pretty regularly since their debut in the '80s. 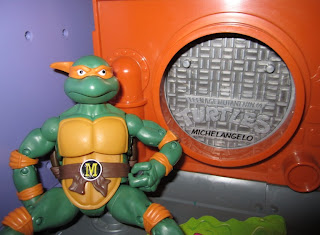 The Latest Return? Set to return to screens on Nickelodeon, TMNT are coming back in full force. "This new show looks to be totally tubular. It is nice to see that dudes and dudettes everywhere want more Turtles!" The real problem came up when inside sources reported that the original April O'Neil was pissed that the new show decided to recast with a much younger April. "Oh now I can't say anything about that. April O'Neil has always been a bitchin' babe. I'm sure the creators of the new show just wanted a fresh take on the bodacious reporter. Hey, we're all replaced with a new version at some point." 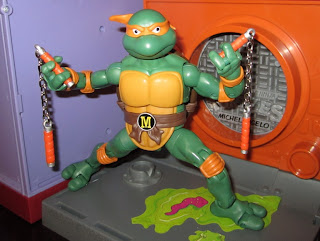 Sister, sister... Once upon a time there was a brief addition to Team Turtle with the introduction of a sister, Venus de Milo. "Aww, dudette? Why would you bring her up? Her name is a name that should remain nameless. Do you know how many pizzas-to-the-head I've been given for that time in Turtle history? Even the Power Rangers have tried to forget about that moment. Though the last time I talked to her she was working in the archives over at Saban Brands. They keep her pretty busy and I don't know that she has left her basement office in quite some time..." 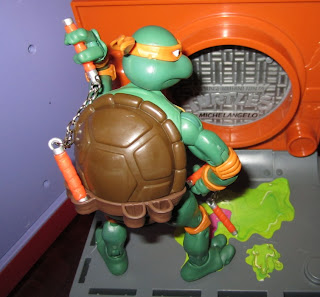 Weapon of Choice... Every Turtle has a designated weapon, but sometimes one must improvise. "I have used all kinds of wicked weapons in some pretty rad fights. I'm talkin' about ninja stars, pizzas, Foot Soldiers. You do what you can. I still trust my nunchaku more than anything though." 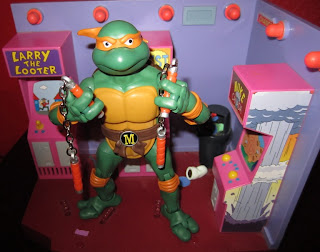 Missions of Mayhem... After fighting numerous enemies and villains, do any particular events stand out through all the years? "Oh sure, we've hurled our way through time. Rocked out with Vanilla Ice. But I gotta say, the worst mission I ever went on was diving into the Hudson River to defuse a bunch of nasty bombs from blowing up the dam near the Holland Tunnel. Dude! There was electric seaweed! Everywhere! I still get gnarly nightmares from that time." 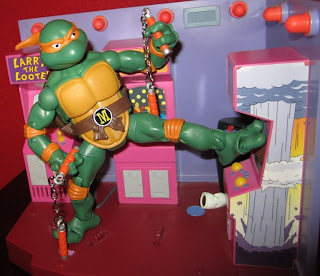 Everything OK Now? Where is Michelangelo now? What are his dreams, what are his goals? Has he found love? Does he still eat pizza? "Nah, I don't eat pizza like I used to. When you are considered a classic, crazy things start happening, like heart problems and unnecessary weight gain. That and the pizza delivery dude still can't deliver in a decent time." And what of love? "Well I heard that Jem is makin' a comeback, is she still a bodacious lookin' babe?" (Diary shows Michelangelo a recent photo) "Cowabunga!" 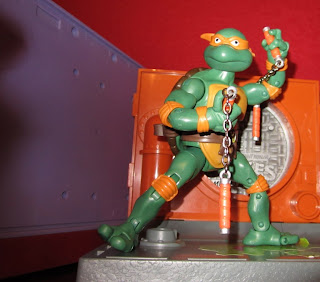 Future Plans? With a return to pop culture, what else is in store for the Turtles? "I heard there was a new movie in the works too. Dude, this feels like the late '80s all over again." Would this beloved party turtle ever go back to the big screen? "Listen lil dudette, if there is a Krafts Services table with some pizza, I'm there. Totally there." (Editor's note: after the interview was over, Michelangelo whispered to our reporter that he wouldn't make some sub par TMNT movie. He also reported that he would not be transforming his soul for box office cashola. No matter how much pizza was on the Krafts Services table.) 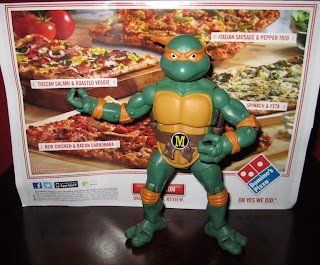 A Heroic Hottie... Very rarely are mutated turtles ever referenced as a beacon of heroic hotness. Diary of a Dorkette was very glad to crown Michelangelo as the newest member of an extraordinary group of the hottest of the hot. "I'm totally honored. The other Turtles will be green with envy. Diary of a Dorkette is one bitchin' site." There you have it folks, Diary is bitchin'. The TMNT will be back in the fall, but for the quirky collectible, there is plenty to be found on toy shelves. Right now! The Turtles both new and classic, are back! Turtle Power! 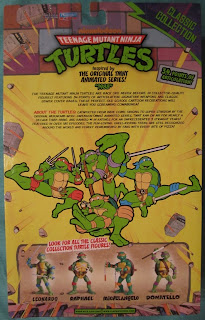 That's it for now. Keep it here dorky folk as we prepare for She-Ra Saturday! With a Save He-Man and She-Ra campaign in full swing, She-Ra Saturday is going to spill over into She-Ra weekend! Get your Masters of the Universe Classics subs on Mattycollector.com before time runs out on Sunday August 6th. (If you can) Also be sure to check back this weekend as a whole new chapter will be ready for Adora's Search for Honor Part 2. The evil Pyres make a power play for Bright Moon, but can ratty old Vampra make it happen? Until next time!