Ok I have returned from my trip to the land of sun and surf. And a three story Target. (I died. The toy aisle just seemed bigger in a three story Target.) Anyways I avoid the sun and I don't surf, so it would seem that my going to California would make no sense. Well there was plenty for me to do. First off my brother lives there and got to debut a show he has been working on for the last year. He starred in and wrote, produced, co-directed, and designed the amazing costumes for a show that was a retelling of the classic Narcissus myth. It was amazing. He is planning on expanding the show from a play to an actual music video/film, so when that ball gets rolling I will let those who are interested know. I am so proud of him, just super proud of my baby brother! I am very glad I got to see his show come together in the best way.

On to the toy talk though, because after all, it is about the toys. I tried my best to search for vintage toy stores. I had a nice list (thank you yelp) however most of the stores were closed down or were selling novelty toys. I wasn't interested in novelty. I wanted to stumble in a shop where I would find old Jem dolls or carded She-Ra items sitting in a bin on clearance because the owner would be like, "No one seems to want that stuff. The kids just don't know who She-Ra is." I wanted to scoop up some amazing find that would ease my anxiety at having to fly on planes.

Side Track: There needs to be a book on plane etiquette. Like if you have survived multiple plane crashes, you should not go on and on about your terrifying ordeals and how you survived every time. That is not fun at 10,000 feet in the air. I seriously had to listen to this woman recount how many times she nearly died and was like, "I just couldn't believe that the wings had blown up. I ended up walking away from the crash! I have good luck!" Umm, no. Keep your scary stories to yourself.

And another thing, if you are supremely sick with either the vomits or the number 2s, just stay home. I don't want to be sitting there on edge while someone paces back and forth talking about how, "I am going to have an accident!" Keep all accidents away from me. I just hate flying. Someone needs to invent a teleportation device, or trigger the teleportation mutant gene in me. Like asap.

Anyways back on track, I did manage to find one cool item. Funko's Pop! line has been one of the cutest lines to collect. In fact I named it one of my Top Ten Toys of 2011. Anyways I was completely thrilled to find the latest Disney Pop! line at Barnes and Noble! Check out what I found! 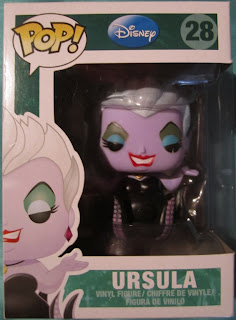 Now I wanted the Ariel too, but her eyes were funky. The one issue I have with these Pop! figures are the messy paint applications that usually muck up the eye area. Either way, this Ursula is just awesome. The Little Mermaid has always been my favorite fairy tale story, and honestly, who doesn't like Ursula? She is the perfect villain. If I could I'd have two pet eels as well. 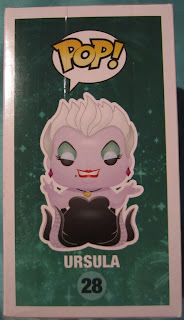 I also love the art on the side of the box. The fun folks at Funko have really created a line that is cute and gets my heart in a tizzy with so many options. Seriously, what hasn't been turned into a Pop! vinyl figure? Oh yeah, She-Ra. 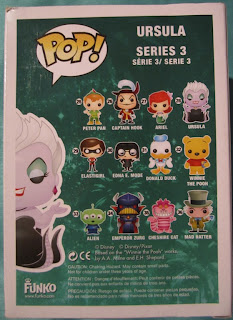 There are also quite a few decent characters for the third series of the Disney Pop! figures. I'm only really interested in Ariel, though with the addition of Donald Duck, I can only hope that Daisy will make an appearance soon.

So with my return to Internet access and my archival room, I will be getting around to a fun filled Toy Chest tomorrow! Until next time!
Posted by Michael Lynn P. at 4:43 PM