Alright toy fans, now that I've had some time to catch up on a thing or two, how about we get to that Toy Chest? Close to a year ago I posted a Toy Chest on the old Kenner line called Shimmers, which can be found here. What I had shown was three loose Shimmers dolls. They were all perfect and fabulous, but sometimes loose toys just aren't enough. There is something fun about looking over a toy mint in the package. So I got real lucky. I mean real lucky. I've got a mint Shimmers doll for Toy Chest Thursday! This is a rare treat and I still can't believe I managed to snag one. (And no, I did not have to make a deal with Ursula the Sea Witch either!) 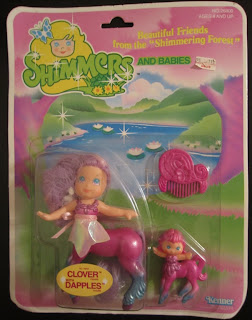 So the basic gimmick behind Shimmers was that each doll was a hybrid of a human and some sort of animal/creature. There was also a mom and baby in each set. The whole shimmer name was due to the awesome sparkly paint that was used for both mom and baby. Even the combs that came with the toy had a shimmery plastic look. 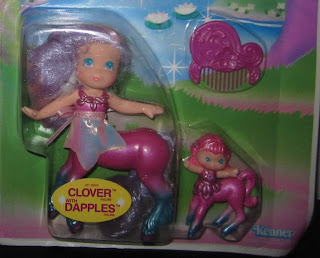 The mother and baby had names that were associated with what they were. Clover and Dapples were centaurs and I am not sure what their names have to do with being a centaur, though Clover and Dapples sound like something a centaur would eat. Maybe? Once the other names are seen, it will make sense. Also, aside from a comb, each mother Shimmer came with some sort of clothing accessory, like a cape, apron, or skirt. 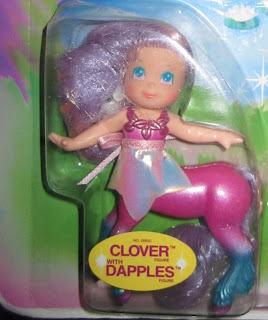 One very cool thing about these dolls was the netting used to keep the rooted hair in place while in the plastic bubble. (I wonder if Netossa had anything to do with this? POP Humor!) Anyways Clover's hair seemed to have two colors, a light purple and some light pink. Some of the Shimmers dolls had streaked hair, while all had bodies with the color fade look. The use of color was truly one of the fun things about this short lived line. I also liked that when it applied, the mother Shimmers had rooted tails too. (Like with the deers and centaurs.) 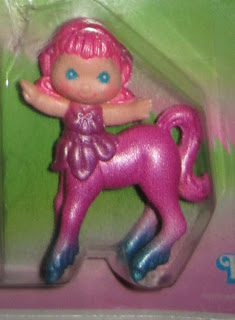 Here we have little baby Dapples. I don't know if it is apparent in the picture, but the paint used on these toys was so sparkly and shimmery. I have always loved toys with glitter either in the plastic or part of the paint. I just love it. I also love that the glittery paint doesn't rub off when you touch it. Nothing is worse than messy glitter all over the place. It can get into your eyes! And we all know I don't need to be dealing with any other accidents. 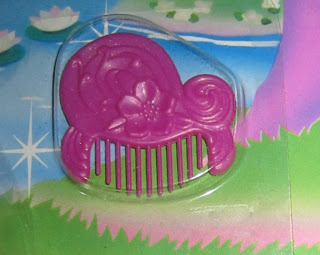 Here is the comb. Kenner really did a wonderful job of giving each type of creature a specially themed comb. The centaurs had this comb with a flower and swirl of what looks like water. The mermaids had seashell combs while the deer had a comb with a flower design. The birds had a comb that looked like a feathered poinsettia. I have no idea what the combs looked like for the butterflies. 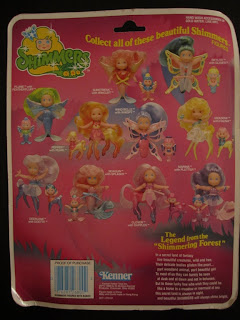 The back of the card features a decent amount of Shimmers dolls to collect from the first and only series. (There was an un-produced second line, but sadly it never saw the shimmer of day.) There were two sets of creatures to collect, i.e. 2 different centaurs, 2 different mermaids, 2 different deers, etc. For example both mermaid sets featured the same sculpts, but different colors and names. 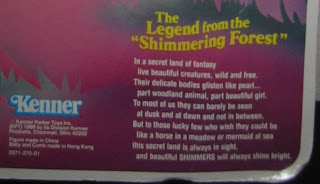 A brief poem was on the back of the card detailing what the scoop was on the Shimmers.

"In a secret land of fantasy live beautiful creatures, wild and free. Their delicate bodies glisten like pearl...part woodland animal, part beautiful girl. To most of us they can barely be seen at dusk and at dawn, and not in between. But to those lucky few who wish they could be like a horse in a meadow or a mermaid at sea, this secret land is always in sight, and beautiful Shimmers will always shine bright."

Well Shimmers didn't end up always shining bright. This poor toyline was gone in the blink of an eye. Sadly it is very difficult to come across a mint Shimmer for a decent price. There are a few on ebay, but they are over two hundred dollars. I was lucky to pick one up for sixteen bucks on a very rare ebay auction. I still can't believe I had such luck in that department. Anyways, let's check out the rest of the Shimmers lineup! 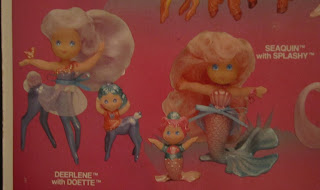 I had Deerlene and Doette as well as Seaquin and Splashy when I was little. Seaquin was my favorite because she was a pink mermaid. Two of my favorite things combined in one. These Shimmers also had names that really described the nature of what they were. Honestly, if the name Deerlene doesn't say, "I'm a deer" than there might be some problems in the Shimmering Forest. 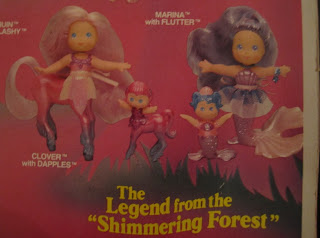 Up next we see Clover and Dapples as well as a mermaid repaint, Marina and Flutter. I don't understand the baby mermaid being named Flutter, but whatever. I would have liked to own Marina with Flutter, however when I was young it just seemed silly to own the same figure with a different paint scheme. Having grown older I have learned that I am all about owning multiple versions of essentially the same figure. (I won't even say how many She-Ra Classics I own. Just go ahead and send me to the next taping of Hoarders please.) 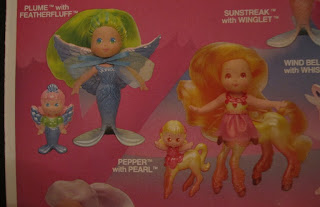 Plume and Featherfluff were for the birds while Pepper and Pearl rounded up the other centaurs. I loved the shocking green hair on Plume. The '80s was the preeminent decade for girl toys having green hair. (Pizzazz, Peekablue, a Wee Wild Thing...) You just don't come across many female characters with green hair on the shelves these days. It is a lost art form that I wish would see a comeback. Don't you? 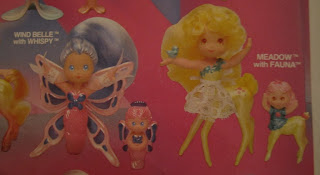 Wind Belle and Whispy were part of the butterflies. I was never that interested in collecting the butterfly sets. I guess I only had obsessive collecting habits for POP's Flutterina. Meadow and Fauna were the last of the deers, and goodness were they a bright yellow. 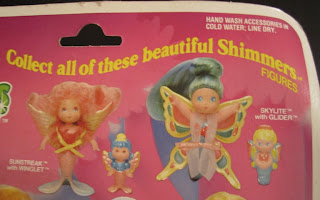 The remaining birdy Shimmers were Sunstreak and Winglet. I had those two as well. I used to pretend that Sunstreak was the Sorceress before I actually got a Sorceress figure. And I have said it before, but it bears repeating, Winglet is the worst name in the entire universe for a little baby bird girl. Winglet sounds like a menu item at Buffalo Wild Wings. I can't help but think of Sunstreak going on crazy adventures to save her baby Winglet from being eaten by drunken frat guys in a place with booming sports programs. Oh, and Skylite and Glider were the last butterfly set.

I wish Kenner had stuck with the line for a little while longer. This toyline was very fun and inventive. The '80s was such a wonderful time for fantasy inspired creatures and toys. I suppose those elements exist in new toylines today, but I just feel like there was such an abundance of that back then. The idea for Shimmers actually grew out of an earlier Kenner line called See Wees, which were just mermaid figures with rooted hair (and babies!) So it would not have been crazy for the line to have continued. I guess the demand had waned. Oh well that is the way things go. Shimmers though gets to live on in my archival room and here, on Toy Chest! Also, for more Shimmers, check out the commercial from Youtube. I am loving that theme song! The animation for the dolls looks cool too.

So there ya go, a new Toy Chest Tuesday, on Thursday! My foot infection is getting better. I don't think I will need to have my foot cut on, which is good. Enjoy the pictures and if you remember Shimmers let me know! I loved this line and would love to hear your stories on why this was a fun toyline. Until next time folks!
Posted by Michael Lynn P. at 10:52 AM