You all know Toy Chest Tuesdays make me nervous, right? I always panic at this time of the week. Of course I have many items from days gone by that I can write about, but much like fossil fuels, eventually the well will run dry. I always panic at what that will mean... But maybe I'm just a lil bit cray. Let's commence with the Toy Chest!

I have mentioned the Care Bears numerous times on this blog. I adore Care Bears. They are hokey and maybe just a tad too cheery, but it doesn't matter! Like most toy lines and cartoons from the '80s, this was truly one of those fun experiences to be a part of. They were colorful bears. That talked. And lived in the clouds. Clouds. (And here I thought Strawberry Shortcake's digs were interesting.)

Anyways Care Bears ruled the '80s with their messages of friendship, caring, and sharing. They had their detractors (I'm looking at you Professor Cold Heart) but they always came out on top, with a smile. And some cool toys.

They were made by Kenner and consisted of a few different sized items. Of course there were the various sized stuffed animals. Then there was the poseable Care Bear figures and their cool ride: the Cloud Car. However, those toys may all show up at a later date. For now we are looking at the Care Bears Miniature Figures! 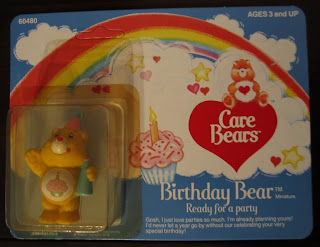 Each figure was a couple inches tall and made of plastic. Each Care Bear also came with some sort of item that was a part of the mold. As you can see this Birthday Bear is ready for a party! Your birthday party! I loved how the front of the card really showcased the designated Care Bear. A little bio was also detailed in the corner! A departure from a toy's bio usually being on the back. 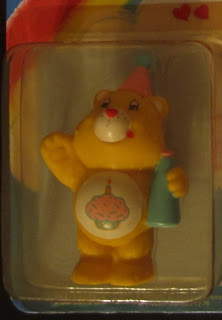 Birthday Bear has his party hat, a party megaphone, and his ever present cupcake tummy symbol. Speaking of, I didn't realize that the tummy symbols would eventually change to Bear Badges decades later. Did anyone else know this? Or have I been living in the clouds? (Ba-dum-bum) 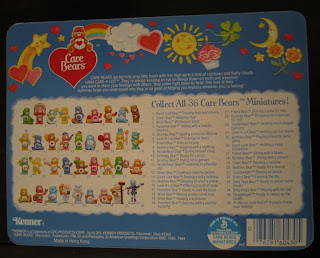 The back of the card has a few things going on. First, the top weaves a lovely story about who the Care Bears are and why people should care; about collecting them.

The little story shares that there are 10 Care Bears and that they live in the clouds, looking down on folk who need friends and some help expressing their feelings. When I was little I truly believed that they lived in the clouds and that they would help me if anyone made fun of me. Well they never really showed up, but it didn't matter. I loved them and in all actuality this line of toys was a great way for kids to really be present with their feelings. 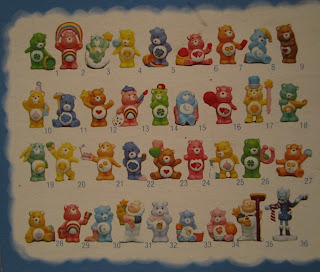 Aside from the 10 Care Bears there was also some human miniatures (Cloudkeeper and Professor Cold Heart) as well as Grams Bear, Baby Hugs, and Baby Tugs. I loved Hugs and Tugs, they were so cute. And now they fetch a pretty penny on secondary markets, most likely due to them having been a rarity in the line to begin with. Of course trying to collect these miniatures can be totally fun... 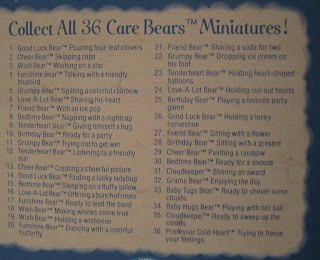 ...until you find out how many miniature Care Bear figures there are to collect. 36! This was only the first series of miniatures! I don't really recall seeing all of these figures in stores, but they were very popular and highly addictive. Seriously, anytime a toy line can create a tiny lil figure is always a good thing. It's more like I'm just a sucker for buying anything. 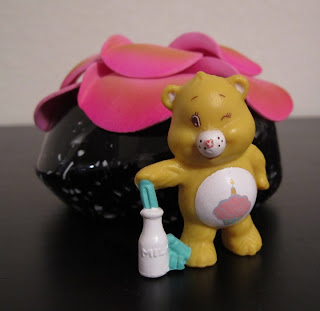 Birthday Bear was not my most favorite Care Bear, so I am not entirely sure how I ended up with two miniature figures (I had this one as a child.) This figure is slightly unusual because he appears to be churning milk. However, upon reading the back of the card, it says that Birthday Bear is playing a favorite party game. I was never really cool at birthday parties, so I have no idea what kind of game Birthday Bear is playing. Anyone want to help me out on this one? 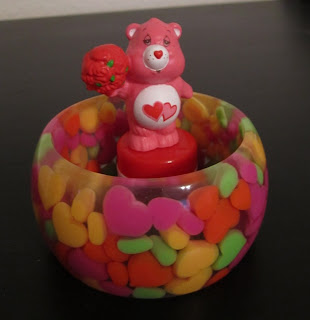 Love-A-Lot Bear has always been my favorite. I once had a nail technician paint the double heart symbol on my big toe. (Spoiler alert, it looked tragic.) Anyways this Love-A-Lot Bear is offering a bunch of roses. So can we discuss the big pink bear in the room? According to item number 6 on the back of the card, Love-A-Lot is a boy. Now I always believed that Love-A-Lot was a girl. Not to sound like a stereotypical mess, but a pink bear with a double heart tummy symbol just seems like a girl character. Anyways I feel like this was just a typo, because in the cartoon and other versions of Care Bears lore, Love-A-Lot was a girl. Not that it really matters. Boy or girl, Love-A-Lot will always be badass! 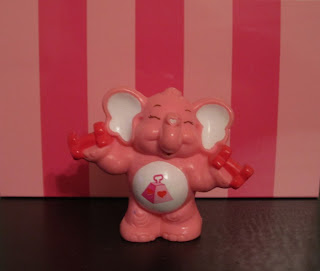 Finally the Care Bear Cousins came out with a later series of miniature figures! Who hasn't loved the Care Bear Cousins? I thought the idea was genius at the ripe old age of 5. Lotsa Heart Elephant was super fun! He came with little heart shaped weights and was basically the muscle of the Care Bears. He was all about exercise, so I was always weary of him looking down at me from the clouds. Out of any of the Care Bears he'd be the one I wouldn't want to get a visit from. I could just hear him now, "Miss M! Your butt is getting bigger with your old age! Now go run 10 laps! Care about that weight; burn it!" Yeah. Never trust a pink elephant with weights. No matter how cute he is.

So that is about it for Toy Chest Tuesday! Enjoy the pictures and be aware of bears in clouds. Until next time!
Posted by Michael Lynn P. at 9:44 PM