Bring it Back! Poochie

I never really grew up with animals. My family just wasn't an animal family. We certainly tried, but sadly nothing ever really worked. I had two goldfish, they were named Tom Hanks and Daryl Hannah after the movie Splash. They died within a week, though their love lasted an eternity. I had a bunny rabbit that was an annoying lil shit. It hopped everywhere. However, nothing could be as bad as the puppy I got at the age of 4. She was going to be the perfect family pet. I was going to have my own best friend. We had her for 6 days. Homegirl got bad diarrhea and was messin all over the place. I felt like I was in a horror movie. My mom got tired of cleaning the crap all up, while my dad only had this to say, "I thought ya'll had this thing under control!"

Needless to say I have always been a bigger fan of fantasy/cartoon inspired animals. They always seemed like better pet ideas. A flying unicorn? Move over wanting some boring regular pony! Rajah, a loving and protective tiger? Really cheap burglar alarm! A dog with hot pink ears? Of course! Better than a dog with the runs. Hence my love affair with Poochie, the perfect puppy!

Released by Mattel in the '80s, Poochie was the pup that could do it all. A talking dog with hot pink ears and fashionable sunglasses, Poochie appeared in activity books, toys, a movie, and just about everything else in-between. I'm not exactly sure what type of dog Poochie was, though I believe Poochie was a poodle. Either way she was cool and I adored the heck out of her.

This begs the question though, why hasn't Mattel brought Poochie back? After all, Sanrio has been pimping out Hello Kitty with that blank face for decades. I think it is high time that we demand a Poochie comeback! Right? Who else is with me? Wait... is that the sound of crickets? Let's look at some pictures to get your blood racing for more Poochie! 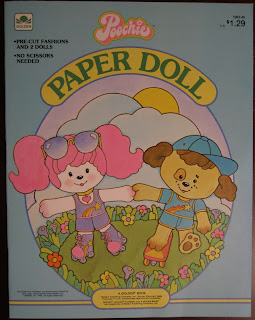 This was the basic design of Poochie. The playful pup is featured here with her friend, Fastball, in a paperdoll book. I had some Poochie coloring books and a stationary set. I think the thing I loved most about Poochie was her logo. I loved the font style with the color combo. That bright pink and yellow just popped! There was also a lot of teals and pretty blues used in the grand color scheme of things. It was just an aesthetically pleasing world. 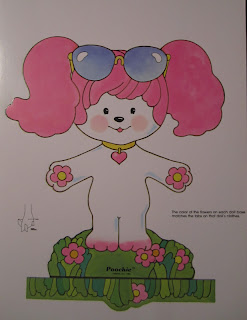 Poochie may have had many looks, though this was her signature one. Hot pink ears, cool shades, and a collar. I have nothing against Hello Kitty, but let's be real, Poochie had much more personality. Sadly she just didn't stand a chance of surviving the '80s. 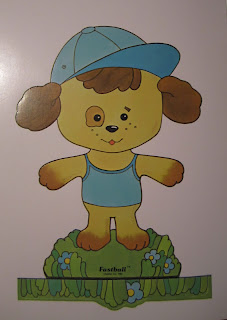 Fastball was Poochie's friend. He would accompany Poochie on her various adventures, like chasing cars or sitting in a field of flowers. I think he was once chased down a street for peeing on a fire hydrant. Poochie was appalled, she thought Fastball was classy! (Honey, welcome to the real world.) 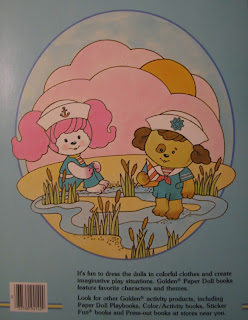 The back of the paperdoll book was yet another scene that found Poochie and Fastball enjoying each other's company. Look at Poochie sit idly by while Fastball gets dirty playing in a puddle. Bonus points though for their matching outfits. That whole dressing-like-your-partner thing is a bit hit or miss in real life, but somehow works for a made up world of colorful pups. Let it be known though, Poochie had other friends too. Those friends were typically rabbits, fish, and other similar animals. Ya know, like most of the pets I couldn't keep around to save my life.

Anyways, I hope that one day Mattel decides to open the vault and bring Poochie back. If done right this could be Mattel's chance to have their own cute lil animal mascot plastered on everything. Could you just imagine a Poochie Panini Maker? Or a Poochie Water Cooler? Hey, if Hello Kitty can do it...
Posted by Michael Lynn P. at 7:32 PM