Toy Chest Tuesday is finally ready to begin. I enjoy this time of the week for many reasons. For one I get to actually remember some of the stuff that I have in my archival room. (This Toy Chest is one I could never forget owning though!) Secondly I realize that pretty much every toy I have owned from a child to the present day always has some sort of story attached to it. There are wonderful memories tied to every toy. Hopefully this will all aid me in my prevention of dementia when I gracefully turn 96 years young. I will more than likely have cybernetic parts keeping my raggedy body together, but I will be doing it in style.

Speaking of style, let's look at another stylish addition to the Princess of Power toyline from Mattel. This is not the first time a POP action doll has made an appearance on Toy Chest. The faithfull reader knows that many POP gals have already been colorfully discussed on this blog. Now the spotlight is ready to shine on Double Trouble, the glamorous double agent! Let's look at some photos! 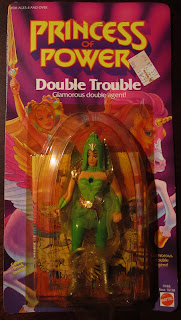 Released in 1984 by Mattel, Double Trouble was a part of the 1st series of POP toys. She came on the standard Series 1 card, with She-Ra riding Swiftwind in the background. I still can't help but smile when I see this packaging. The shades of purples and pinks with some golds mixed in just made me so happy. I would go to Toysrus and just stare at the shelf display of all the POP characters. It was truly magical.

Anyways Double Trouble was the "green" character. Each POP character from the first wave had a specific color scheme. (i.e. Frosta had a lot of blue, She-Ra wore white, Castaspella had some yellows and oranges...) This was a theme for many toylines at the time, like Strawberry Shortcake and Rainbow Brite. The concept is also used for many toylines in the present. There is just something fun about each character wearing a specific color. 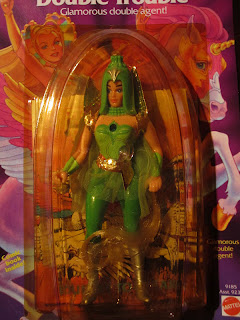 Other items that were packaged with Double Trouble included a removeable cape and skirt as well as the mini-comic titled Journey to Mizar. Unlike the other POP toys, Double Trouble did not have a great deal of rooted hair. She only came with a large ponytail. I can't help but wonder if Madonna stole Double Trouble's look for the Blonde Ambition tour. I really hope I'm not that only one that has ever thought that.

There was a reason though for Double Trouble's ponytail and unique green helmet. She had an action feature! If we flip the toy package over we can see exactly what made her such a big deal. Like Man-E-Faces from the Masters of the Universe toyline, Double Trouble was able to switch her face. By turning the dial on her back, Double Trouble could go from a sweet fresh faced Rebel, to a bold evil Horde-look. (I always enjoyed the evil face more than the goody-two-shoes one.) 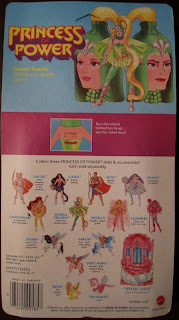 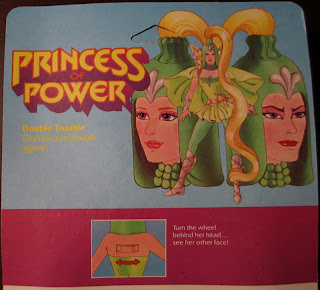 The back of the package shows what the two faces look like. The "sweet" one has that dewy look, or maybe it's Maybelline. The "evil" face just has some bold unkempt eyebrows and heavy eye shadow. The artwork for the two heads was very cool. The drawings actually captured what the toy looked like. I would actually bust out my old Double Trouble to show real pictures of the two heads, but I fear switching her head would result in a catastrophic turn of events that would leave me entirely devastated. (And Double Trouble in real toy trouble.) 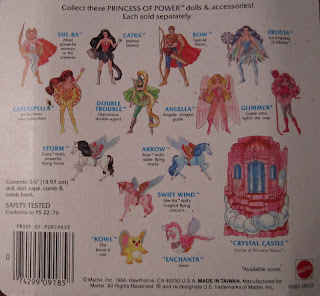 Either way the rest of the package featured the fantastic characters from Wave 1. Click here for a fun run down on this series. Again, the artwork was always fun. This toyline was truly magical and helped inspire a great deal of my imagination.

For some added factoid goodness, Double Trouble was a very unsual toy. She never appeared in the She-Ra cartoon and was only ever really mentioned in some of the Golden Books, mini-comics, and coloring books. This does not happen often for toylines. Usually a toyline that is based off of a cartoon or movie will feature toys that are in the show. Since Double Trouble never factored into the old cartoon, I have often wondered what her storyline would have been like. Hence why it was important for me to include her in my She-Ra fanfiction, Adora's Search for Honor. Being a double agent is not as glamorous as it seems. (If you haven't been reading the fanfiction yet, give it a shot. It isn't some great masterpiece of literary wonderment, but it is a lot of fun.)

One final little bit of information about Double Trouble and the POP toyline involves the reuse of parts. It is common knowledge that the reason the MOTU and POP toylines were so successful for Mattel was that most of the figures reused the same sculpted parts. For example, Double Trouble and Sweet Bee share the same leg and boot sculpts, they just have different paint jobs. Catra and Sweet Bee also share the same bodice. However, the reuse of shared parts was used far more with the MOTU toyline than with the POP toyline.

This is yet another reason why POP was such a special line. Each action doll was given special detail. Some parts may have been reused for different characters, but each toy had unique clothing and rooted hair to go with the painted faces and other sculpted parts. (No other POP gal dared to wear Frosta's thigh high boots, ok?) Double Trouble was also one of the more unique sculpts for the line. That green helmet was made just for her. (It was never reused for any other character.) This all may be old news for POP fans, but I just find it fascinating at the amount of work that was put into the POP toyline. POP may not have had as many figures as the MOTU line, but POP did have a lot of heart and quality. I hope to see more of that on display with the 4 Horsemen sculpting and designing more POP characters for the new Masters of the Universe Classics line!

So that is about it for this week's Toy Chest Tuesday! I hope you all enjoyed looking back on Double Trouble. I also realize I owe you all a Dorkette Book Club post from last week, I was a bit behind to say the least. I will deliver though. A new month is also approaching, so you all know what that means! (insert catchy theme song for a new Heroic Hottie) So keep it here!