Ready for some beefcake? Seasoned with a side of awesomeness? It is time for a new Heroic Hottie to be named! And the month of May is sparing no expense in providing you all with some really hot shots of Voltron's Hunk! Feast your eyes...

Mostly known for his role as pilot of the Voltron Yellow Lion and for wailing out his own rendition of Stairway to Arus at the 1984 Galaxy Alliance Olympics, Hunk has long been on everyone's radar for his love of food and life. Arriving to the official May Heroic Hottie photoshoot in a pair of jeans and vintage Voltron t-shirt, the ever hungry Hunk made a beeline for the craft services table first. After piling a few plates high with mini-cheeseburgers, pizza, and nachos, Hunk finally sat down with Diary of a Dorkette to discuss his thoughts on being an intergalactic sex symbol and posing in a new iconic toy package!

Diary: Ok, first things first, what were your thoughts when the photographer wanted to pose you inside a plastic box?
Hunk: (between bites) Not gonna lie, I was totally thinking I'd be claustrophobic. But then I remembered I'm the Yellow Lion Pilot. No biggie. I was happy with the concept. Even if the fake plastic mold of my head in a helmet was also next to me in the box. I still don't understand what the photographer was really going for with that shot! I did love the artist who drew the large picture of me on the mock toy box though. I wanted to take it home with me. 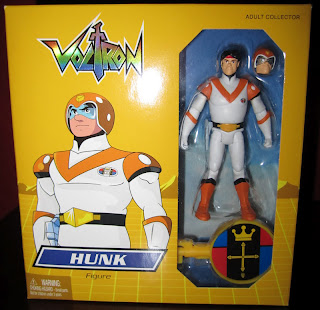 Diary: We'll see what we can do about that. Do you think of yourself as an intergalactic sex symbol?
Hunk: Ha. No, not really. I've always been busy defending the universe from evil. But I guess it wouldn't be bad being an intergalactic sex symbol too.
Diary: Let's talk about your role in Voltron. What do you have to say to all the naysayers that feel your role is just as the goofy heavy hitter?
Hunk: Well let's see... being a heavy hitter beats being some moody leader or even a wisecracking smart guy. I'm the one you want at a bar fight at 5 o'clock in the morning. Alright? Yet I also have the heart of a poet. Have you heard my music?
Diary: That is true. You play a mean guitar.
Hunk: Damn right. Chicks love dudes that can play music. I urge every dude out there to pick up an instrument, even if it is the oboe. Play something. Write a ballad for your lady. Just rock out!
Diary: Speaking of ladies, is there anyone that you've got your eye on? Word on the street is that a lot of women would kill to date you.
Hunk: What can I say, I like taking romantic walks. As long as there is a hot dog stand or booth with food nearby, I'm ready for anything. 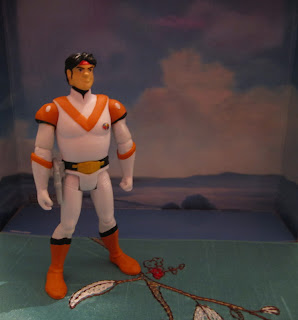 Diary: So back to the question, anyone special in your life?
Hunk: Nah, not at the moment. I prefer goin solo right now. My biggest gig is with Voltron. Someone has to defend the universe. However, does anyone know what Jem has been up to?

The interview went on for a few more hours. During this time Hunk also shared, exclusively with Diary, some of his upcoming tracks for a rock album he has been working on for the past few years. Upon playing the tracks he was honest by saying, "These are the most personal songs I have ever written."

While some personal issues were shared, there was one thing that Hunk was not too keen on showing off: His Yellow Lion. Our photographer worked hard to capture some shots of Hunk and the Yellow Lion. To no avail, Hunk instead posed against a photo of the Yellow Lion inside the Great Archival Musuem. 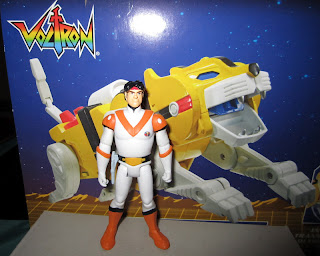 Diary: So no close up shots with the Yellow Lion?
Hunk: Look there are some things that just have to be sacred, ya know? I just couldn't let the Yellow Lion out of the box for some pictures. Nothin' personal.
Diary: No, we understand. Besides, the photos probably would have been sacrilege. The photographer was planning to shoot you nearly nude on a bearskin rug on top of the Lion.
Hunk: Well, on second thought... (laughs)

All kidding aside, Hunk was very honored to be May's Heroic Hottie on Diary of a Dorkette.

Hunk: Oh yeah, this is a big time honor. Look I'm just some dude with a bit of a gut from too many beers and burgers. So to be recognized as a Heroic Hottie is possibly one of the coolest things I have ever gotten to be a part of. Just wait until the other guys hear about this. Lance is gonna be ragin' with the green eyed monster big time!

The green eyed monster could mean jealousy, or could actually be a Robeast that Voltron will be fighting later on. Diary of a Dorkette wasn't really sure. Either way, let's celebrate May's Heroic Hottie: Hunk! 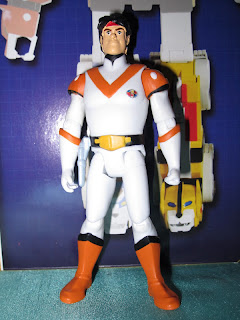 Parting is such sweet sorrow!