Alright toy fans, Diary of a Dorkette is back in business! I've got a new power cord and battery, so let's all hope my laptop can chug along for a while longer. To make up for such a grievous turn of events, I thought what a great way to celebrate than by having a bit of Toy Chest on a Thursday. A rebel I know.

So today we are going to look at Pocahontas, that lovely Disney movie that was so deliciously historically innaccurate... but we all loved it anyway. I loved the toy line that accompanied the animated film. As some of you may recall, Mattel always did a fantastic job of releasing a small (but really cool) toyline to go with a new animated Disney movie.

The Pocahontas toyline spared no expense in capturing the feel of the film. There were basic figures that came with cool items as well as larger figure-sets and playsets. Shall we look at one of the offerings?﻿ 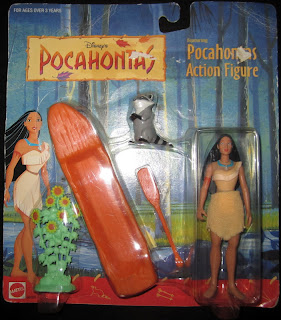 Here we have Pocahontas. She came with a canoe, paddle, some sunflowers, and her pet raccoon Meeko. Her skirt was also removeable. Articulation was very basic as her arms and legs only had movement. Her head was unable to move, though it looked like it could. The figure came on a card that really promoted the animation of the Disney film. The background picture was of Pocahontas walking through the woods, most likely getting ready to sing some award winning Disney song. 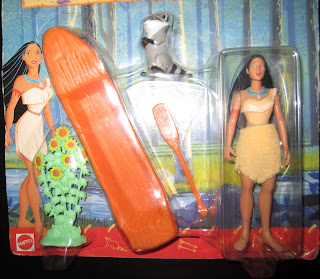 Here is a bigger photo of all the goods that came with Pocahontas. There were actually a lot of neat accessories that came with this figure. I loved that she came with a canoe and pet racoon. (How cute was Meeko?) All toys should come with those type of accessories. I always enjoyed pretending that Pocahontas was stranded at sea in her canoe, trying to escape the clutches of Jaws. It was always a good time. 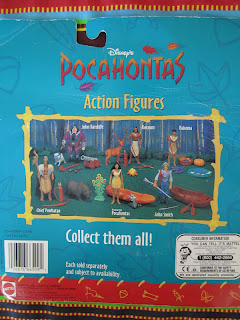 The back of the card kept with the film's theme. All the figures came with pieces that were associated with the film. There were always inventive items included with each character too. I especially loved the little pond that came with Nakoma. Everything was also lumped together, there were no special one shots for each figure. Everyone was grouped together, which really showed how much a person would be getting if they were able to pick up every figure. 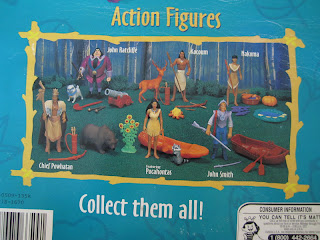 I also really loved the boat that John Smith came with. It is also interesting to note that John Smith had a little more articulation with his arms. He was also voiced by Mel Gibson. What are the odds that we'll ever see another Disney film with Mel Gibson as the voice actor? Another interesting factoid about Pocahontas was that Christian Bale was also a voice actor for this film! (I knew there was a reason I liked him.) Bale would also be the voice of John Rolfe in the sequel. I also assumed that Vanessa Williams had been the voice of Pocahontas because she sang the song Colors of the Wind. I lived a lie for many years because Ms. Williams had only been the voice for the song. However I have always liked the idea of Vanessa Williams being the voice of Pocahontas. In my canon she is, no matter what folks tell me. Oh and she was totally robbed of a chance to shine in the last two seasons of Desperate Housewives. I'm just sayin. (Side bar, DH fans, we need to talk about that series finale. I'll get to it... soon.)

Anyways Pocahontas was one of my favorite Disney movies. The songs were good and the ending was always a tearjerker for me. I always cry at this movie. I mean she runs after him to say her goodbye as he sails away! I also cry because I really believed that she had this great soulmate kinda love with John Smith. Of course, I learned differently in history class, and when I did, I just had the hardest time coming to terms with the fact that Pocahontas was never in love with John Smith. She married some other dude (John Rolfe) and died of unkown causes. At a young age no less. That was even more depressing than the damn movie. Leave it to learning something in a history class to really put a damper on things. (I wonder what became of Meeko?)

Either way, I am glad that Mattel made such a great toyline for Pocahontas. I can't think of any other way to celebrate such a historical icon than by having my own lil immortal piece of plastic. Here are some other pictures of Pocahontas! 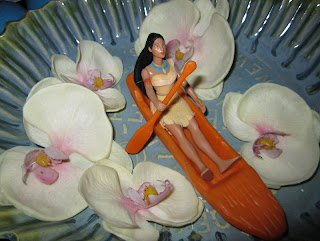 Floating in a ceramic river. 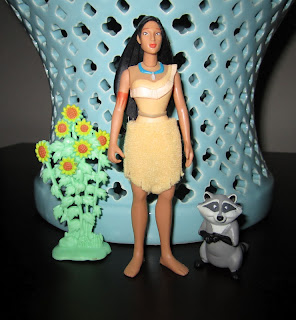 Hanging out with Meeko, the hungry hungry raccoon.

Alright dear readers, that about does it for this post. Enjoy this Toy Chest and be back soon! She-Ra Saturday is coming up and it is gonna be good!