The topic of scented toys is nothing new on Diary of a Dorkette. Who hasn't enjoyed smelling a toy that claims to smell like various types of flowers, fruits, desserts, or even a malodorous evil skunk warrior? Back in the '80s and early '90s there were plenty of scented toys on the shelves that made the sweet smell of success for many toy companies. In the present day, toy shelves are missing the various options that scented toys had back in their heyday. Every now and then a toy line might incorporate scent as a feature for its items. Thankfully the world has yet to grow tired of Strawberry Shortcake's various incarnations as well. So for today's Toy Chest Tuesday, I thought it best to look at an old smelly relic: Popcorn Pretties!

Mattel has always had some great and innovative ideas for its toy properties. Released in 1991, Popcorn Pretties were these little dolls that popped from a kernel to a sweet smelling doll that looked like a southern belle with a large obnoxious hat. Let's look! 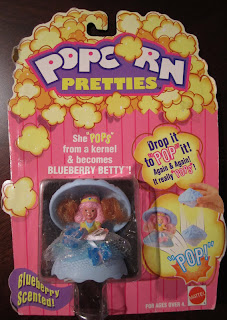 The package plays up the images of popcorn with the drawn popcorn bag. I always wanted to eat popcorn whenever I saw these toys. They triggered my addiction to collecting while also adding to my caloric intake and food cravings. The captions also did a great job of explaining the whole toy concept. "She 'pop's from a kernel and becomes Blueberry Betty!" Each Popcorn Prettie had a similar introduction. (And seriously, do these look like southern belle debutantes or what?) To the right another caption read, "Drop it to 'pop' it! Again and again! It really 'pops'!" The doll's skirt folds up and when dropped on a hard surface, the skirt pops back to normal showing the doll on the inside. These were similar to Cupcake Dolls, but smaller and with more of an "action" feature. 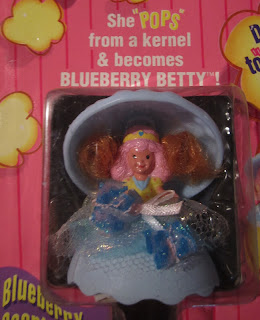 Looking more closely at the doll, we can see there was a great amount of detail put into a Popcorn Prettie. Each doll had molded hair with two little rooted ponytails. Some extra material was also placed over the plastic skirt. Each character also had a scent that was unique to them. Blueberry Betty smelled like vomit. I'm totally joking. She smelled like fake blueberry scent. I'm not sure why she had pink hair, but I guess there was some sort of reason behind it. I would have liked her hair to have been a nice shade of blue or indigo. Look at me trying to be all Rainbow Brite in this piece. 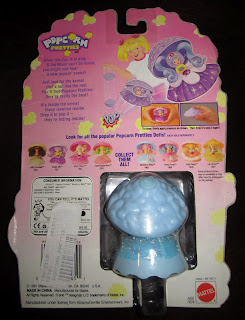 Flipping the card over we can see many cool things. There was a pretty little poem to describe the world of Popcorn Pretties. To the right, we find that no child model was hurt while popping this popcorn doll since a drawn diagram was used to show the features of the Popcorn Pretties (though Mattel did use a real hand model for some photos below.) There was also a list of the other Popcorn Pretties up for grabs at the store. One of my favorite things about this item was the ability to see the back of the doll too. I love this packaging concept for certain types of toys. It was a nice way to really get the full visual effect of the doll. 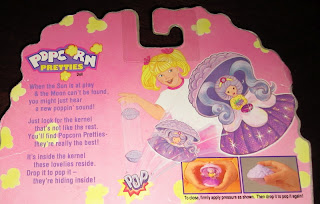 Let's check out the poem about Popcorn Pretties:

When the Sun is at play
& the Moon can't be found,
you might just hear
a new poppin' sound!

Just look for the kernel
that's not like the rest.
You'll find Popcorn Pretties-
they're really the best!

It's inside the kernel
these lovelies reside.
Drop it to pop it (like it's hot)
they're hiding inside!

This whole poem is crazy, but I love it. First of all my hungry bad-self will eat popcorn morning, noon, and night. I don't need the Sun or the Moon tellin' me what to do. And secondly, towards the end of the poem, I find myself wanting to just drop it like it's hot or something. But really, how magical would it be to have little pretty people living in your food? They've been doing it with King Cake for centuries. Would you like to meet the other Popcorn Pretties?

This was probably my favorite part about the card. I loved looking at all the other Popcorn Pretties and which ones I would want the most. From left to right, there was-

I had only one of these as a kid, but I wanted them all. With that all said, let us examine a few things, shall we? The top part told us to "Look for all the popular Popcorn Pretties Dolls!" I always imagined a made-up line of unpopular Popcorn Pretties dolls too. They would have had lousy smells like, Burnt Popcorn or Licorice Lucy. (Actually, licorice isn't all that bad. Or so I've been told.)

Speaking of all these scents, one thing that always bothered me about this line was that there was no buttery popcorn scented doll. I would have gone nuts for a Popcorn Prettie that actually smelled like popcorn. It just makes sense, right? How can there be a toyline of scented dolls called Popcorn Pretties, but none of them smell like actual popcorn? 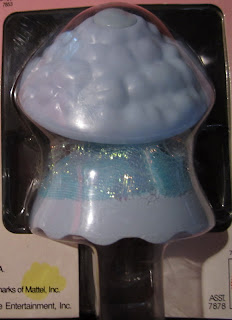 The final photo of Popcorn Pretties shows the back of the doll. The top of her hat was all the popcorn. I was always in awe of the concept for this toy. I loved the idea of something that looked like popcorn but could also turn into a doll. The first time I saw this toy in action, I was like, "There is no way that toy is going to hit the ground and bounce open to a doll! That kind of technology won't exist for at least another 40 years!" I was wrong. Popcorn Pretties knew how to drop it and pop it.

That's it for Toy Chest Tuesday! So now that I have my laptop up and running, be ready for some really great stuff this week! We will be going all chi-chi with a new Dorkette Bookclub entry! And there will be a new Toy Regrets tale! So enjoy some Popcorn Pretties and keep it here!!
Posted by Michael Lynn P. at 10:07 AM