So here is the deal. I am a tremendous fan of the Four Horsemen and their fabulous sculpting powers for the Masters of the Universe Classics line. They have managed to give me and many other fans something special. I've gotten to see some really lovely favorites of mine fully realized in updated forms that just POP. Seriously, She-Ra and her friends have been ignored for far too long, so to see certain characters already released and looking fantastic is truly amazing.

However, there are a few tiny issues to deal with. Certain characters from the vintage Princess of Power line had a look about them that does not always get translated to the new MOTUC line. It has been a divisive point amongst fans. Some want She-Ra and her friends to look more like the Filmation/styleguide versions while other fans would really like to see their She-Ra characters with vintage toy elements. Now I am not going to break it all down with what that all means for every character, but there are some really important differences. For instance, a little while ago I showed some images of a custom Classics Catra that had more toy-like elements. (At least in terms of her color scheme.) For all that, click here.

Well I've been bitten by the custom creature again and decided to take my chances on changing up another She-Ra character. Last month Mattel released Netossa, the captivating beauty. She has been a fan favorite and her inclusion into the MOTUC line was a delightful surprise. Here is what she looked like from her original MOTUC release: 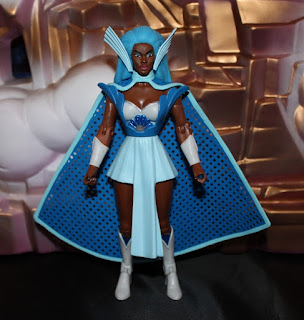 For those familiar with the vintage toy, this Netossa does resemble the toy as well as capturing the look from the cartoon. I absolutely love this figure. I am more than pleased to own one as the vintage action doll is incredibly rare and worth a pretty penny. 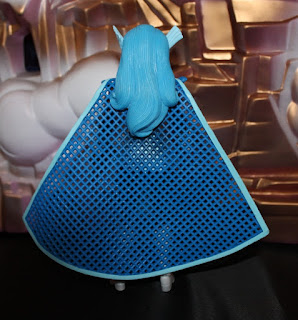 The massive net cape is fresh and creates a unique look. Netossa had one of the more interesting outfits from the She-Ra line. Her net cape is only the half of it. The wings from the side of her head as well as her flared bodice is truly wonderful. 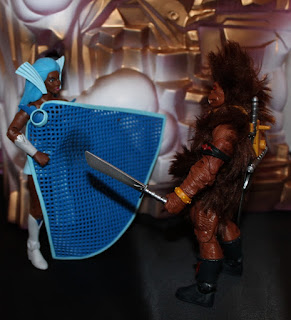 Netossa's skill of course was using her netted cape to capture enemies. Some find this to be incredibly dull and silly, but I think it is quite impressive. In my mind Netossa is a skilled craftswoman who can weave various types of materials to create all kinds of dangerous nets. Could you just imagine a net made of fine sharp wire? Tossing that towards an enemy would not be pretty! Plus I, and many other fans, also think of Netossa as a strong and powerful warrior too. Just look, she can totally handle her own against Grizzlor and his ferocious fur. 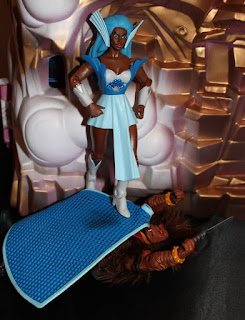 Standing triumphant over her enemy, Netossa looks on in victory, while Grizzlor just wishes he could have dealt with She-Ra instead.
With all this fabulosity, what could possibly be changed on Netossa? The sculpt is divine while the color scheme just looks fantastic. However... I couldn't help but wonder what Netossa would look like with a bit of change. So that is just what I did. 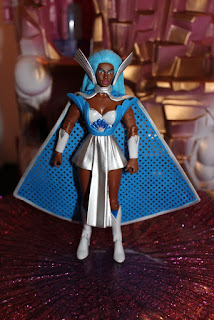 I didn't do much. I simply added silver paint over the sections that were light blue. The inspiration was of course based off of the vintage toy because that is just what the original Netossa was sporting. Her skirt and head wings were silver. 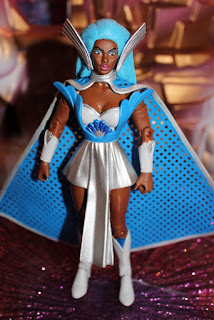 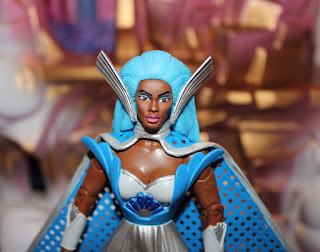 I had also intended on removing the wings around her face and super gluing them to the collar around her neck. The goal was to have the wings attached to something instead of just floating. However those damn wings were not going anywhere. Try as I might I could not remove them. I know I'm no She-Hulk or anything, but my goodness they are firmly in place. Plus I was afraid if I tried too hard it would damage everything. Since Netossa sold out, I certainly was not wanting to mess anything up. 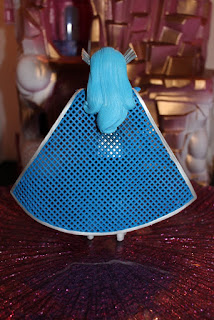 Here is the back. Painting the trim on that cape was so scary. I am far from being a painter, so my hands were slightly nervous. I of course had the help of my Elmer's Painters Pens. I love those things. Just release enough of the paint onto a plate or on the plastic itself, and then brush it on. So easy, even Kowl could do it. 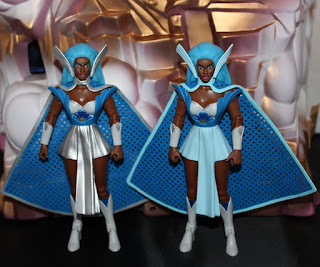 Looking side by side I think both have their own strengths. The light blue on the original does draw a lot of attention to the skirt and outline of the cape, but I just like seeing that sparkle of silver on Netossa. Anyways, another POP custom from the lovely MOTUC line, from yours truly. I really like doing this! I am becoming more and more comfortable with the idea of sprucing up some of my favorites.
Of course now that Toy Fair 2013 is coming up, I am hoping that Mattel will surprise us with a new She-Ra character. I believe they will be showing off a few upcoming MOTUC releases for later on in the year. My fingers are crossed for Mermista. I would just die.
Posted by Michael Lynn P. at 6:12 PM