I interrupt this usual Toy Chest Tuesday to bring you something new. Actually, the truth of the matter is that I have been wanting to have some good toy talk lately but with all these toy interviews and long winded 50th chapters, I have been behind on getting to the good stuff! So, Toy Chest Tuesday will be back next week, instead, let's check out an all new Bits and Pieces!

So I am not a frequent shopper at Sears. That Kardashian Klothing Kollection just never really spoke to me and I have no use for really nice tools. Sears had become one of those stores I'd always just drive past. Anyways, I have a dorky friend that told me awhile back that Sears sells toys now. I've had this piece of information filed away in the back of my mind for some time, but I never really did anything with it until recently.

About a week or so ago I went on this mad goose chase for a WWE Miss Elizabeth figure. I would go into further detail on that debacle, but I will save that for another time. Suffice it to say, I am still slightly annoyed that Miss Elizabeth was supposed to be exclusively released on Mattycollector.com and instead she was short packed and dropped off at retail. Way to go.

Anyways, so I had this crazy scheme that maybe, just maybe, my local Sears would have a Miss Elizabeth in the toy department. I went to the Sears and instantly felt like I had stepped back in time, if only because it had been well over 10 years since I shopped in one. I marched my way up to the toy department, and well... it was more like three toy racks on wheels. I wouldn't call it a toy department. They did have a ton of WWE Elite figures though! They just happened to be a Series behind. So there was no Miss Elizabeth (yet) but there was something else... 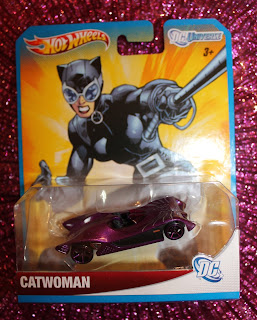 I am no way near being classified as a Hot Wheels collector, but I have been known to purchase a Hot Wheels product if the licensing collaboration was done just right. (Picture a Frank N Berry HW car or the He-Man HW cars.) Needless to say I had to pick up this Catwoman catmobile. It looks so cool, and since I don't really collect these items I had no idea of its existence! I knew that there were some DC Hot Wheels on shelves, but I never would have guessed they'd make one for Catwoman! 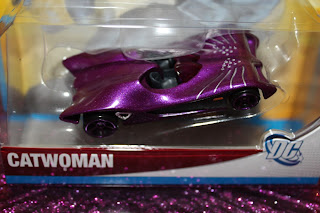 It has everything I love in a car. No seat belts. Glittery purple paint that would also look chic on my nails, and ya gotta love painted whiskers. All cars need painted whiskers. (Move over Pope Pinion! Am I right?!) 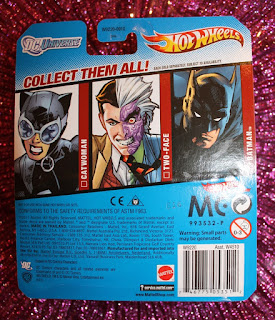 There are also Two-Face and Batman cars in the series too, but I am sure most of you are already aware of this. My big reason for bringing it all up is to say that I would really love to see Catwoman get a larger sized catmobile! I mean do we really need a new version of the batmobile every year? (Don't answer that yet, I am really excited for the Adam West era batmobile later this year.) I would like to see Mattel take a chance on a cool vehicle for Catwoman. And I don't mean a catcycle or some other such nonsense. That is a cheap and simple way to satiate Catwoman fans. I want a hearty vehicle for Catwoman. With glittery purple paint. And whiskers.
Major Edit: Thanks to @marionlawless on Twitter, I just found out that Miss Elizabeth will indeed be for sale on Matty Collector during the March 15th sale date! This is a big change from what we were told by Mattel months ago! For more information, head on over to here.
Trix are for Kids
I've mentioned Winx Club before, in the last wave of Bits and Pieces to be exact, but they are coming back up again for all intensive evil purposes. There are things I like about Winx and some things that I don't. One thing for sure though that is really fun are the three main villains from the series. Finally Jakks Pacific is slowly beginning to release these venomous gals in a 3.75 inch Trix Collection. 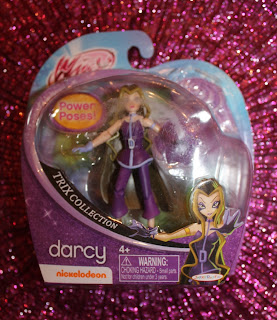 There are three in the collection- evil sisters: Icy, Stormy, and Darcy. By pure chance I was able to pick up a Darcy at a local Wal-Mart about a month or so ago, but I have yet to see anymore of these items pop up in stores. They go for a large chunk of change on eBay, but I do have hope that these specific characters will get a larger release in the coming months. 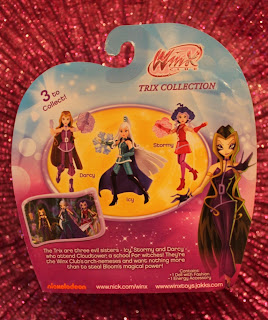 I'm a little worried about the fate of this line. I don't know how successful the Winx Club dolls have been doing in the U.S. The dolls are popular throughout the rest of the world and are actually big sellers, but for some reason it just isn't catching on like Monster High or something. I really hope this line can make it. I love when villains are introduced into my grabby collector hands, so I want to be able to find Icy and Stormy too.
The Blasphemous Oz
Is anyone else looking forward to Disney's Oz the Great and Powerful next week? I am. I know that there are some Oz fans that are groaning at the fact that we are getting a special effects heavy Oz film, but I don't mind it at all. It could be worse, Disney could have tried to remake the original. Instead we are getting a nice little prequel with James Bond's wife in it playing the seemingly evil Evanora. (Based on the trailer there is no 'seemingly' about it, Evanora is a real witch!)﻿ 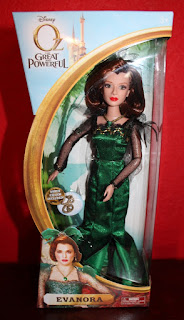 As such, you know I had to pick up a new doll. I don't play when it comes to movie marketing merchandise. This line of Oz dolls are brought to us by Jakks Pacific and they are really pretty dolls. I picked Evanora first because I really like this green gown. It has me even more excited and ready to take a trip to the Emerald City. I really hope this movie won't be a poppy-induced mess. 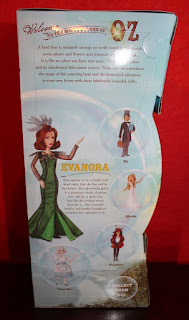 The other dolls to collect consist of Oz, Glinda, Theodora, and a larger doll named China Girl. And Jakks Pacific isn't the only toy company making some cool Oz dolls. The Disney Store has special edition Oz the Great and Powerful dolls exclusive to the Disney Store. And finally Mattel will be bringing out some Wizard of Oz Barbie dolls later in the year. Mattel does this every now and then. The dolls will be Dorothy, Glinda, and the Wicked Witch. What a great time to be a Wizard of Oz fan! Not for nothing, but who here has read the Wicked series? Pay no attention to the safe and lovely Broadway musical, I'm talking about the actual books written by Gregory Maguire! Oh those books are scandalous! Now that is what needs to be made into a movie.
Sorry Mario, but Our Princess is in a Blind Bag
Ok sometimes I feel like I am way behind the times on things. Like I try my best to keep up with the toy blogs and everything. There are some fabulous toy bloggers out there that are always keeping me hip and with it. I am always looking and searching for news on upcoming things that I can't wait to get my hunt on for. However, there are times where I either miss reading something or I have some poppy-induced high that knocks me the heck out, because I was never in a million years expecting this: Blind bag Super Mario Bros. Wii minifigures! 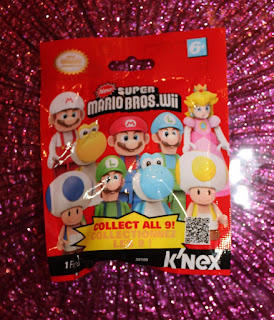 I have been patiently waiting for K'Nex to bite the Bullet Bill and make a nice Princess Peach mini figure. I mean they have made minifigures of everyone else! So I was at Toys-R-Us and I blindly stumbled upon these Mario blind bag mini figures! I had no idea. 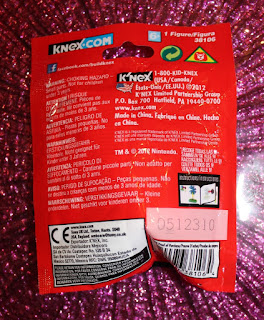 Right away I went to groping and fondling the bags searching for the Princess. It wasn't that difficult to do because with only a few character selections to search for, each one has very unique identifiable parts. There is also a code on the back that totally helps too. The number 0512310 is the same on each bag, but certain numbers will be underlined for certain characters. The code for the Princess is two lines under the 5. Pretty easy. 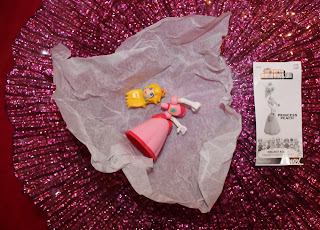 The minifigure comes wrapped in tissue with a little strip of instructions. It is all very classy. 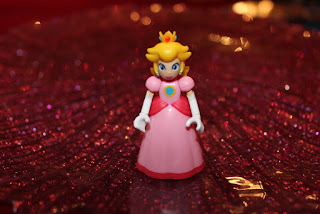 And here she is, finally, a K'Nex Princess Peach. I do realize that with all the Princess Peach stuff I own, I really did not need this, but it is just nice to see her getting some representation! It doesn't have to always be about Mario and his tall dreamy brother Luigi or all those loud mouthed Toads.
So that is about it for Bits and Pieces! I hope that everyone is doing well, and be sure to keep it here, all kinds of fun stuff are coming up!
Posted by Michael Lynn P. at 5:00 PM