Ok so I don't even know where to begin with this strange day. First off let me just say, I know religion is a very touchy subject for certain folks. I was raised a Catholic, but as I have grown older my thoughts and views on religion have changed. I will leave it at that, because this post is not meant to be an excursion into my views on religion and what-not.

Instead, I found myself stumped to hear that the Pope was like giving up his job. I mean who does that? He wears custom made shoes by Prada and had a wardrobe of real fancy robes. I would love nothing more than to have a job where I am styled to wear comfy robes and shoes made by Prada. All kidding aside, I had no real reason to have this bit of news change up my day. There were bigger things I needed to deal with, like work. However, I did get a strange laugh at how things would unfold.

So I had a nice coupon from Big Lots that I planned on using on my way home from work. Big Lots is a fun store because you can always find hidden treasures in the toy aisle for cheap-cheap prices. I mean it is crazy at the things that can be found in a Big Lots toy aisle, to say nothing of their DVD section. Side note, I once found two seasons of Dynasty and a season of Melrose Place for 10 bucks each. Soapy prime time dramas for cheap-cheap? Yes please!

Anyways, I was perusing the toy aisle looking for a little something fun, when low and behold I stumbled upon two Random Acts of Odd Toy Making that I could not pass up! 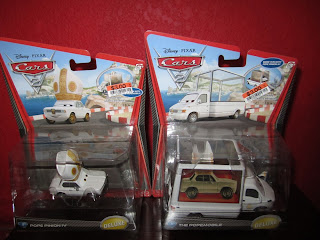 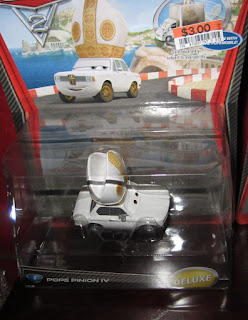 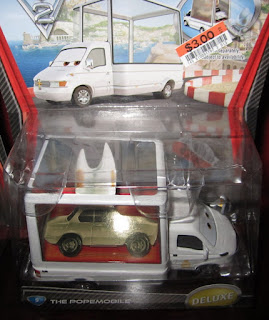 I mean what are the odds that the Pope steps down from his job of doing whatever it is that the Pope does, and I find a Cars 2 Pope Pinion and Popemobile for $3.00 each? I purchased them quickly with my coupon. I'm either going to be burning in Hell for eternity or the universe has a really good sense of humor.

So you must be asking yourself, why on Etheria would a not-so-religious person want these Pope items? My answer is simple: why not? I love collecting strange things. In what life would it ever make sense for a toy line to make a Pope car? With hat and eyes? (I only wish this Pope Pinion had Prada wheels.) I realize this character was in the movie, but it is still just so strange to me. I don't think kids are hankerin' for a Cars 2 Popemobile. Are they? What makes this even better is that I had seen this car at a grocery store months ago, but it was so incredibly expensive. With my coupon I got this strange piece-of-toy for a couple bucks. I just think this is so funny. What are the odds? The Pope becomes an ex-Pope and I find cheap Pope toys at Big Lots. This will go perfectly well with the Playmobil Nun I found at a Tuesday Morning a couple years ago.

Does anyone else do that? I mean I don't base my entire collection off of random items, but every now and then I think it is so much fun to find things that are just unusual. Anyways, I am off. Tomorrow is an all new Toy Chest Tuesday and I have some fun plans for what will be appearing. Take care everyone!
Posted by Michael Lynn P. at 6:21 PM