Can you smell the sweet baked smell of an all new Toy Chest Tuesday? I can, and it smells berry cool! So it has been about a couple minutes since the last Toy Chest Tuesday. I am glad Toy Chest Tuesday is back! I wasn't sure what to talk about because there is just so much stuff to cover. However, you can never go wrong with Strawberry Shortcake. That little ragamuffin has shown up on a Toy Chest or two in the past, but this time we are looking at the Strawberryland minis!

Some of you may already know that I have a very big heart for toys that are scented. I mean from stickers to figurines, if it smells sweet or like something I could eat, I just love it. Strawberry Shortcake was one of the first lines that introduced me into the world of smelly collectibles. Kenner created a fantastic world of characters and like any true toy line, the items were in different scale. The mini pvc Strawberry Shortcake figures were part of the Strawberryland Miniatures line and there was a lot to love! Let's look!

Each little pvc mini was just an inch or two tall and they were highly cute. The packaging was even cuter. I have always loved the imagery for the Strawberry Shortcake brand. The fruit and colors all look so nice. Even the font is really great. (I love that each figure had a specific message in the corner.) Also, each card had a specific color scheme depending on the character. More on that later. 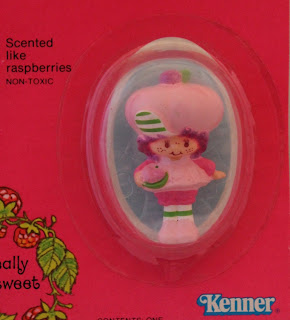 The miniature Raspberry Tart really captured the character's likeness. She came with her big fruit hat and curly hair. I always liked Raspberry Tart. Originally she was like a bratty foil to Strawberry Shortcake, but then she eventually became friends and one of the good gals. 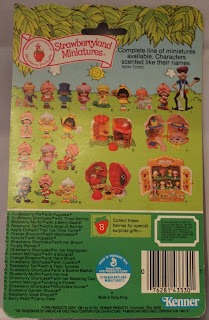 The line up for the other minis looked pretty small, but that is because this Raspberry Tart was part of the first wave of SS minis. Kenner rolled out a ton of these things, I mean a ton. 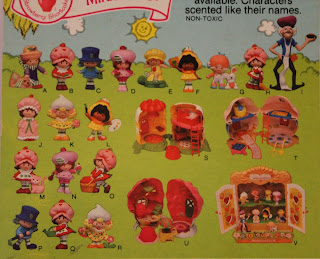 The original line up was a virtual who's who of Strawberry Land along with some actual play set pieces of the fabled Strawberry Land hot spots. And let us not gloss over the Purple Pieman. I like seeing him on things because it is a further reminder that he actually existed. Sometimes I feel like geriatric villains from some of my favorite vintage properties were nothing but a dream. But it is good to see evidence that folks like the Purple Pieman were indeed very real. (It also makes me long for Hasbro to get with it and include those characters in the next Strawberry Shortcake reboot, whenever that will be.) 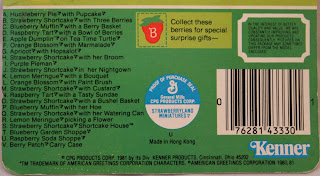 Here is a very nice enlarged photo of the check list from this lineup of minis. Most of the characters had two to three variants, but this would hardly be the end of the Strawberry Shortcake mini. An explosion of mini goodness was just around the corner.
Angel Cake 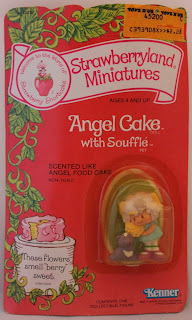 Angel Cake was included into a later wave of SS minis. The success of most toy lines typically gives way to new characters. Angel Cake was one of the newer characters that I fell in love with. She was very uppity, but I liked her because of how she looked. I also love that her pet was a skunk. I mean how can you be uppity when you have a skunk for a pet? 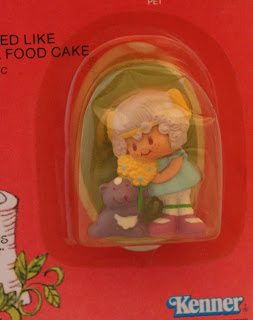 Angel Cake was very fun. She was sporting the whole lavender hair look before everyone else was (though toy versions would see her with white blond hair.) I liked this mini because of her pet being a part of the sculpt. The minis with pets were always my favorite. That was just such a fun thing about Strawberry Shortcake and is one of the very reasons why I love lines like Monster High so much. I think the idea of everyone having their own pet mascot is just really fun. 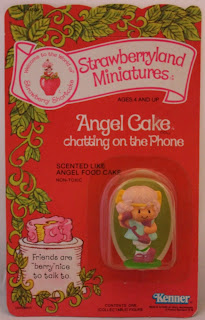 Here is another Angel Cake mini. The card art for these figures was pretty consistent for the entire run of the first generation Shortcake items. Like I mentioned before, Raspberry Tart had a hot pink coloring while Angel Cake was a lighter reddish pink. 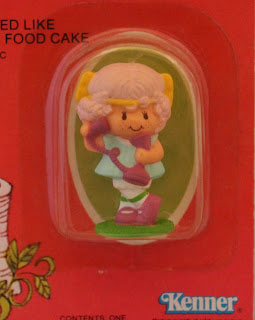 Did anyone else like Angel Cake? I know some Shortcake fans have found her to be an annoying character. I just always liked her though. I had a slightly older cousin and she had a huge collection of Strawberry Shortcake dolls and minis. Of course her interest was waning just as mine was rising to a golden brown. Whenever I'd visit her I'd make her drag her collection out so I could check out which ones I'd want on my next visit to the toy store. I was a messy uppity little thing, but I can't help it. This line brought that out in me. 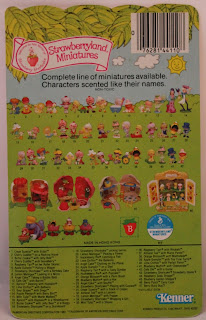 As you can see the minis grew into a full fledged crowd control issue. I mean there were so many of these things to collect! Granted, the numbers were a bit inflated due to variants and all, but these minis were a collector's dream. Or would that be nightmare? 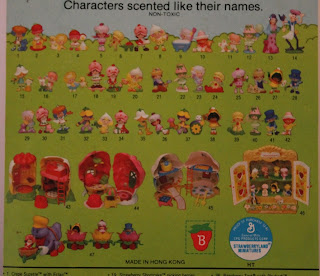 The play sets were pretty much the same, but there were some really fantastic new additions, like Sour Grapes and Lime Chiffon. What made everything so fun when I was younger was that I learned about all these various types of desserts and sweet treats. I developed a love affair with dessert that has stayed with me, and my hips, till this very day. I mean Strawberry Shortcake made me want to become a bad ass baker. That whole thing kinda wore off because I don't know my way around a kitchen at all. (I do make a mean Red Baron frozen pizza though.)

There were 47 items in total for the mini portion of Strawberry Shortcake items! You just don't see much stuff like this anymore. I mean the original Strawberry Shortcake line was massive. This was just the mini section, the larger dolls were also part of an extensive set themselves. Ah those were the days. Luckily companies like Hasbro have completely embraced the miniaturization of regular sized toy lines, which I know sounds like a contradiction from my previous post about wanting large sized figures for my old broad eyes... but... it is a woman's prerogative to change her mind. Oh hell, I just want everything.
Sour Grapes 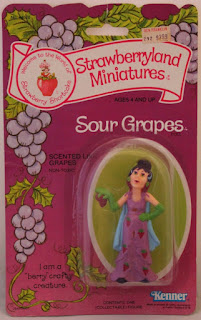 Of course one of my ultimate favorite 'everythings' has got to be Sour Grapes. She was the first Strawberry Shortcake doll I ever got so I really have a soft spot for the crazed older woman in a maxi dress with grape print. I mean those blue streaks! How could anyone not want one? 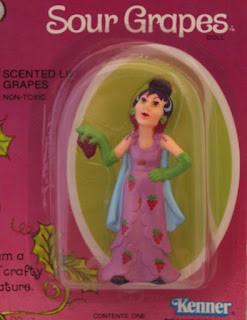 There were two versions of Sour Grapes mini figures. The one above and one with Sour Grapes holding her pet snake Dregs. Her pet Dregs is a very interesting addition to Shortcake lore. He was in like one episode and then never heard from again. Methinks it was a bit much for a doll to have a pet snake for a girl's toy line back in the day. I like to think that Sour Grapes proudly paved the way for fabulously ghoulish lines like Monster High to have dolls with pet snakes, mice, or whatever else and not have it be much of a big deal at all. Ah, how far we've come. 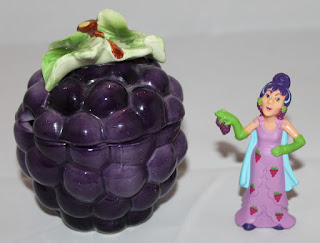 So I had to open Sour Grapes. I purchased her along with these other minis not so long ago. (Mini-wise I only had an Apricot mini growing up.) But the thing I like about the minis is that they are still relatively affordable on the secondary market. I think I paid about 6 bucks for this Sour Grapes mint, and the great thing is that after I opened her she still smelled like grape! It was so nice to smell that artificial grape smell again! My old Sour Grapes has long lost her smell, so I was pleasantly surprised to smell that familiar grape scent. After all these years too! 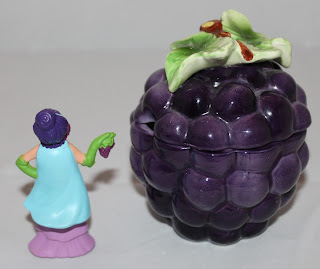 The back of Sour Grapes was also pretty interesting. I love the blue cape and everything. The doll had the same light blue item, but it didn't look like a cape. Such a fun figure though. And a really fun line. These minis had everything and then some.
So that is about it for Toy Chest Tuesday! It is nice to be opening the old toy chest after being absent for a couple weeks. I hope you are all doing well, and be sure to come back. I've got all kinds of fun in store! Now I am off... to maybe give baking another shot.