Ok so here is the thing. I'm truly a simple kinda dorkette. I don't need big fancy play sets or extravagant figures with more articulation than a real human being. (Though those things are nice.) Sometimes the best kind of toys are just small pieces of PVC. At least I think PVC is the correct term. I don't know what this stuff is made of, I just know that back in the day companies like Applause and Disney made the best little toys! There was this store at my local mall that would always have the perfect little items from the latest blockbuster movies. It was the best. After catching a great movie, I'd go to the store and see what they had to offer. So let's check out some of these fun PVC mini-figures from some of your favorite films (and other things) ever made! (These will be in no particular order)

When Dick Tracy came out, it was a tremendous merchandise juggernaut. There were books, action figures, dolls, and let us never forget the soundtrack that featured Madonna's Vogue. Now strike a pose and look at these toys! 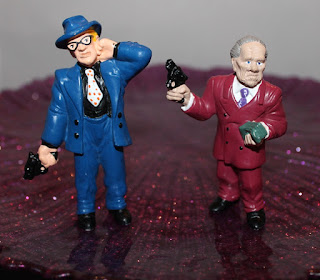 It is very strange, I only ever got two mob guys, Itchy and Prune Face, and of course Breathless Mahoney (more on her in a second.) I still don't know why I was never interested in getting a Dick Tracy figure, but I think it had to do with the villains. There were so many cool villains with their own unique sort of gimmick. It reminded me of the Evil Warriors from He-Man. (I do realize that Dick Tracy as a property came out way before He-Man.) And of course I had to have a Breathless. 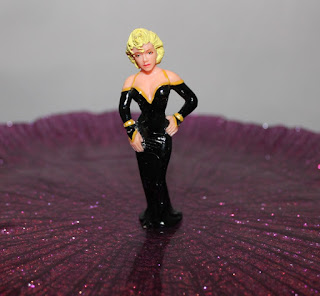 I am a woman of a particular age and while some people may have Britney Spears or Lady Gaga as their forever pop star, Madonna was/is mine. I remember crying when Breathless died, because that was my favorite pop star on that big screen giving that performance everything she had. And when I saw that Breathless figure from Applause in my mall store, I just about died of dorky excitement. During that time I would also become desperate to find just about anything Breathless related. I had the Velcro wallet with Breathless on the cover. I wore out the cassette soundtrack. Of course the one thing I had really wanted was the lovely Breathless doll from Playmates. She has always alluded me.

My most favorite Disney movie ever. Like ever. I have a best friend who says Cinderella should be my favorite Disney movie on account that I've spent my fair share of time in an attic and I have a thing for nice shoes, but The Little Mermaid will always be my favorite. A little known fact about me: I never eat sea food because that is practically like cannibalism. I simply cannot eat members of my kingdom. (In some weird twist of fate I know it will be proven that I come from a line of mer-folk. I'm just waiting for the ancient texts or visit from Tritan or something.) 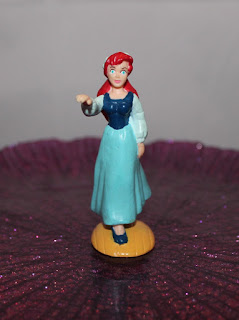 Anyways, this little Ariel figurine was brought to us by Applause and she is one of the more creepier looking Ariel figures. She looks slightly possessed by something. But she was my first Ariel figure in what would become a long line of Ariel items. I remember going to see The Little Mermaid and just crossing my fingers that this would be a hit for Disney, and we all know how that turned out. I just wish though that instead of making dolls and tiny versions of Ariel, that Disney and Mattel could actually release a nice line of action dolls or something. I think that would be cool. 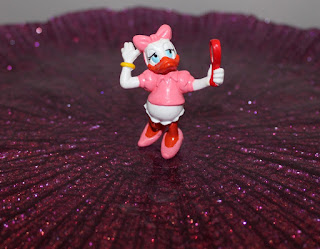 One of the things I have never understood about Mickey and his friends is the lack of love that Daisy Duck gets. I mean Mickey gets toy treatment all the time, as does Minnie. I mean my goodness, that mouse in a dress has her own damn show. What about Daisy? Well, at least Applause made a great figurine. I also love that she was in pink as opposed to her usual purple. 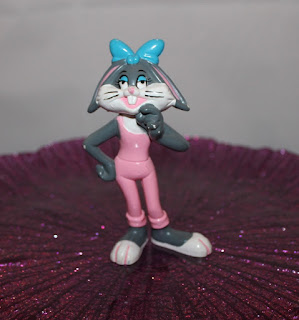 Ok so I have to admit I am not sure if this figure is Bugs Bunny in drag or if it is Bugs Bunny's girlfriend. One of the problems with purchasing these little figurines is that they do not come with any packaging so sometimes the identity of a toy can be called into question. I mean under normal circumstances I would say that this is Bugs Bunny's girlfriend. However, the rascally rabbit has totally stepped out in drag during numerous outings. (If so, Bugs doesn't even bother with a wig, he just uses his ears for hair.) A Bugs Bunny drag figurine would pretty fun though. I mean drag queens are really important because they can teach us mere mortals how to do things like the death drop and how to make our cheeks pop and lock. The only thing I do know about this figurine is that it was not made by Applause. 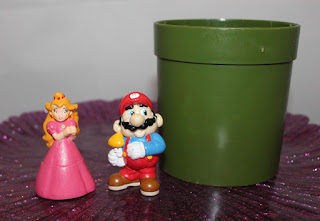 I remember practically passing out in the video game aisle at Toysrus when I saw that Applause had made Nintendo PVC figurines of not just Mario, but Princess Toadstool (as she was called at the time.) I mean Princess Toadstool! This figurine alone helped jump start my interest and love for video games. This Princess Toadstool went with me everywhere during the summer of '89. 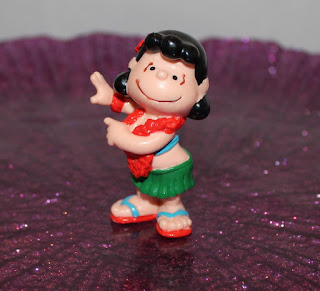 When I was little I found myself relating a lot with Lucy from the Peanuts gang. We had so much in common. We were bossy know-it-alls who gave dopey boys a hard time and we'd eventually have a thing for musicians. So imagine my surprise when Applause made cool Peanuts figurines. The Peanuts would of course get the royal toy treatment in various forms throughout the years, but at the time this is all I thought Lucy fans would ever get. 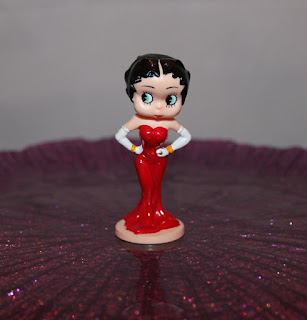 Remember when Betty Boop was on, like, everything? Like there was a definite time when Betty Boop was just over saturating the collector's market. I kinda miss those days because Betty Boop sort of feels like a bygone character now. I went through a big Betty Boop phase, and really what dorky white girl didn't? I had Betty Boop t-shirts with some silly message like, "I'm a down ass B, boop-boop!" Or whatever. They were those silly Betty Boop attitude t-shirts, you all know what I am talking about. I thought I was so sexy and cool. I was sadly mistaken. But I am happy to have a fun Betty Boop figurine!
Gremlins 2
Ok so let me set the stage for you. Gremlins was one of those movies that was just a big deal for me as a kid. I loved Gizmo and his exploits were really fun, if not slightly terrifying. Gremlins 2 was the movie that made me lose a little love for Gizmo because the actual Gremlins stole the movie and my heart. Seriously, the series wasn't called Gizmo. So Gremlins 2 was just a satisfying movie experience, and after watching it in the theater I went to my trusty mall store with the Applause goodies and I found this lil ditty... 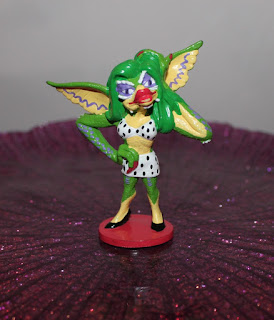 The girl Gremlin was just the best. Her real name is Greta, and for some reason I only learned this recently. I feel like I should have water thrown on me after midnight for that one. But my goodness I absolutely loved this figurine. What is even better is that Neca was supposed to be releasing a nice new updated version of Greta, so I really hope they still do.
Jessica Rabbit
Ok so I come from a movie family. Like ever since I was little, movies were just a part of the fabric of our lives. I mean I don't even know how to explain it. Movies have just always been important to us, and I certainly learned a thing or two from all these great movies. I think it was Who Framed Roger Rabbit? that really introduced me to the idea of finding a way to define the word sexy. I mean I was far too young to be concerned with the word sexy, but when my mom took me and a friend to see Who Framed Roger Rabbit? and Jessica Rabbit slinked onto the screen it was like I had this strange moment where I said to myself, "I want to move just like that!" Well my mom was not too happy with that, in fact she thought Jessica Rabbit was a bad influence. "Good girls don't behave like Jessica Rabbit!" I at least had this awesome figurine. 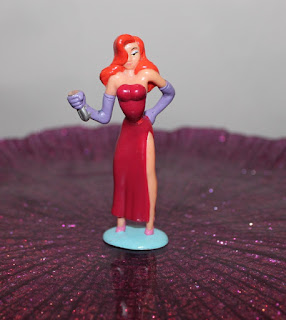 I think it was the hair covering part of her face. I mean the leg slit and oddly shaped spinal chord may have had something to do with it too, but I fell in love with the hair covering part of her face. I tried my best to emulate that when I was younger. Unfortunately I could never get it right. I have always had flat, straight, and boring hair. There were never chances for wavy luxurious hair to stay in place over part of my face. And for the record, folks need to stop acting like Angelina Jolie invented the leg slit move, because Miss Jessica Rabbit was doing it before Angelina was even tossing back a vile of blood. Also, on a side note, this figurine was once holding a frying pan with a face print in it like from the movie, but I cut it off when I was little. I thought she'd look better without it. 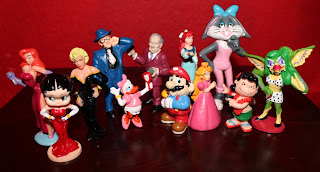 So here is the group all together. I have some more Applause-type PVC figures, and they may show up again. When I see this image I can't help but think that this line-up would make a strange cast for a show or something. Like from left to right the characters would be three dueling divas that fight crime both real and animated. There would be the two mob guys in their colorful pimp suits and Prune Face could have a stand alone episode where he finds out about Botox. The show would also feature a vain duckette who walks around pants less. I think fans would go nuts for the Italian plumber that eats shrooms and crawls around the sewer trying to save this goofy girl that is always getting kidnapped. There'd also be some sob story with a Disney Princess just wanting the chance to walk and she'd get help from her rabbit friend that does 80's aerobics drag. There'd be the requisite kid with attitude, and she'd be allergic to Peanuts, just for the humor of it all. To cap it all off there would be some hardcore gal with green hair who'd be unable to get wet after midnight. (Now there goes her social life.) I think this all has the trappings for a sloppy hit!
Anyways, I hope that Toy Chest Tuesday finds you all well. Again, I am sure more Applause figurines will show up again. For now enjoy the mash up of PVC goodness. PVC is the correct term right? I need my fellow dorky readers to help a dorkette out. So keep it here, because I am working on a really fun Heroic Hottie for the month! All I will say is that I have been interviewing someone who will be competing in a new reality show called Earth's Next Top Pope. Oh this is going to be so much fun. Take care everyone!
Posted by Michael Lynn P. at 5:09 PM