Sometimes in life, there are things that go your way and then there are the times when things go completely awry. As of this latest entry, things are going well. Bruce Wayne and I have been getting along famously. It's nice to be needed. With Alfred still in the hospital, and Bruce all laid up in bed following that morbid attack by a giant roach, I am the only one capable of helping to care for him. He has even asked me to do his Batman work, like making sure the Batcave is in tip top shape. I get to use his cameras to look in on people and make sure they are ok. It's really great. He also really believes me. Oh Diary, he believes me when I say that I am really Miss M. It's nice. Now I just need to find that pesky dragon figurine for Maleficent. I've been searching on eBay for awhile now, and nothing. I even went to Craig's List, but all I could find was a group of people dressed as dragons looking for a 5th for toy torture, whatever that means. Ah well, I need to get going. I must check on Bruce.


Click for all the Dorkette goodness!
Posted by Michael Lynn P. at 2:54 AM 16 comments:

Email ThisBlogThis!Share to TwitterShare to FacebookShare to Pinterest
Labels: Woman of Wonderosity

It's been a minute since Batman was nearly killed at the hands of the Roach. I've been playing nurse. That sounds much sexier than it really is. I had to help Bruce stitch the gaping wound on his stomach. There was blood and guts everywhere. Luckily there are no pictures to chronicle this grody moment in my life because I have been trying to forget it. Also, Bruce is a nice patient. He sits around and reads the paper. I bring him food and regale him with tales from my life in my old body. He acts funny whenever I talk about my love for Michelangelo. I guess he has problems with a girl falling for a Ninja Turtle. Had someone told my younger self that I'd be madly in love with a Ninja Turtle I would have scoffed, but like I always say, the heart wants what the heart wants. Anyways, I need to get back to helping Bruce. Alfred is still in the hospital and there is a lot of work to be done. Of course, before my work, Bruce and I are going to listen to our favorite radio show After Dark, hosted by Sydney Rutledge! (editor's note: Sydney is none other than the Swans Crossing rival of Mila! Readers will remember that Mila is annoying and is sisters with the vile Velvet Sky!) Anyways, I am off again Diary.


Click for all the Dorkette goodness!
Posted by Michael Lynn P. at 2:23 AM 19 comments:


Click for all the Dorkette goodness!
Posted by Michael Lynn P. at 2:01 AM 23 comments:

I'm still a lifer inside Arkham Asylum. I mean, you really get used to it. In fact there is a formal happening right now. I took a break to freshen up and try to look presentable in a new dress. It isn't couture, but it has a certain flair. My hair is in perma-crimp mode still so there really isn't much I can do with that. Not that it even matters. At the end of the day, I'm still stuck in the wrong body and I'm living inside Arkham Asylum. I find myself wondering about my friends from my old life. And even Roach from my brief stint living under a bridge on Main Street. He might have been an insect, but he wasn't that bad. Oh goodness, it doesn't matter. I need to get back to the formal.


Click for all the Dorkette goodness!
Posted by Michael Lynn P. at 4:01 AM 13 comments:

There's a battle brewing in Snake Mountain. Fresh off their search for clues surrounding the death of Miss M, the Cat Ladies ambushed Snake Mountain to get more answers from Skeletor. Of course at the same time, She-Ra and Wonder Woman had their own ambush ready for Skeletor as they were looking for the pirate called Sea Hawk! One for suffering fools, Skeletor rolled out some of his Evil Warriors to squash the uninvited guests. So let's see how this all unfolds! 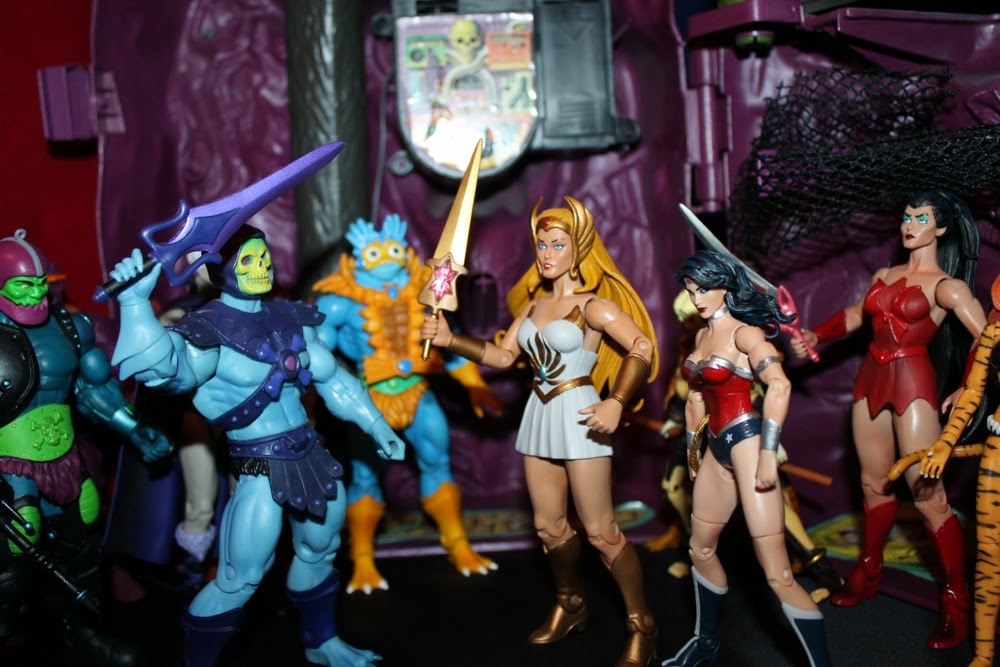 Click for all the Dorkette goodness!
Posted by Michael Lynn P. at 3:17 AM 6 comments:

Gearing Up for Summer!

There are some really cool things that go on during the summer. There are all those really cool (and sometimes not-so cool) summer movies. San Diego Comic Con happens in the summer. I try to exercise in the pool in the summer. And Diary of a Dorkette celebrates its birthday in the summer. I know I said awhile ago that the Diary would be turning four, but I got my years wrong. It was my failed marriage that was about to turn four, the Diary will actually be turning three. (Don't worry about the failed marriage part, I'm actually doing really great. I find myself smiling more and I've gotten to surround myself with the best people in the world.)

Anyways, let's get to the point. I've been teasing about something fun happening this summer that will involve all of you, and I am now ready to divulge what that is! I have been very fortunate to get to know some amazing people through this blog, and I want us all to celebrate the Diary turning three by everyone busting out their toys and joining in on a fun story.

For those just tuning in, I have been telling this silly goofy story involving a toy version of myself and all the toys I have in my collection. It originally started out as a single monthly "interview" called the Heroic Hottie. My original plans had been to lovingly poke fun at the idea of ogling male action figures. This was in a response to a person who had typed in a forum about how he only collected hot female figures. I thought the idea of basing a hotness to an action figure was so silly that I just had to write up a silly string of Playboy-like centerfold interviews where the beefcake was all plastic all the time.

This all turned into something much bigger as I expanded upon the Heroic Hottie interviews and added Bodacious Baddies and Women of Wonderosities. It was all meant to be a way of reviewing and looking at action figures in a fun way with nods to the defunct ToyFare (one of the greatest magazines of all time.) Anyways, last year there was a subplot in these interviews that revolved around a group of toy villains plotting my death, which is where we are at now. Toy Miss M died only to come back in the wrong body and now she is trying to find her place in the world as the evil Maleficent pulls the strings.

This is where you all come in. Starting in July, there will be a series of interviews that will create a massive event that will need a lot of one shots to go along with the main story. Since you all know I love a good comic story, I want to continue that 'feel' but with everyone posting their own toy story on their own respective blogs.

Some rules will apply. The story will have to take place within the events that are going on (this will all make more sense once the event is revealed.) But everything else will be up to you. Take pictures and write your own story. Or animate your own story. Or record your own story. It doesn't matter, just have fun with your toys! If you are interested in being a part of this crazy crossover of epic toy proportions, please email me at missmermista@gmail.com and let me know that you want to be a part of it. I know things might seem murky right now, but trust me, it will all make sense. Just email me if you are interested.

These one shots will begin after the Conference of Evil, which will occur the weekend of SDCC. That's right! The Conference of Evil will be happening again this summer. If you missed that story last summer, click here to catch up. (Since toy Miss M couldn't make it to SDCC, she ended up attending the other big convention that weekend, the Conference of Evil.) Ideally these one shot stories will be rolled out throughout July and into August. I haven't created official dates yet, but I want this to be a really fun event that will go through for a handful of weeks. More details will be coming out. I just wanted to share this with you all and get to see who will be interested in participating. So don't forget to email me at missmermista@gmail.com. I really hope that you guys will want to join in on the fun with me. Let's play with our toys gals and guys! I hope you are all doing well, and keep it here! I will be posting more stories soon. There's a lot of action going on at Snake Mountain and that Spring/Summer formal at Arkham Asylum can only get heated up with the Joker now foot loose and fancy free. Bye everybody!