It's the beginning of the end. Oh diary. I really gave it my all. We were going to grow old together. Year after year, story after story. Drama unlike any other with every toy friend imaginable. How does it all wrap up though? This project of so much love, how do I wrap it up? I don't think it can be wrapped up. I'm gonna try though. I have to make it right, for all my toys.

Click for all the Dorkette goodness!
Posted by Michael Lynn P. at 9:49 PM No comments:

There are certain rules that one must abide by in order to create a successful scrapbook sequel.

And Number 3: Never, ever, under any circumstances, assume the spelling of Sidney is correct.

Click for all the Dorkette goodness!
Posted by Michael Lynn P. at 11:26 PM No comments:

Email ThisBlogThis!Share to TwitterShare to FacebookShare to Pinterest
Labels: Scream 2

Someone's taken their love of Scream and scrapbooking one step too far...

It's me. I'm the someone. Now go on and jump into one of the corniest things you will ever witness!

Click for all the Dorkette goodness!
Posted by Michael Lynn P. at 2:04 AM 3 comments:

Email ThisBlogThis!Share to TwitterShare to FacebookShare to Pinterest
Labels: Scream 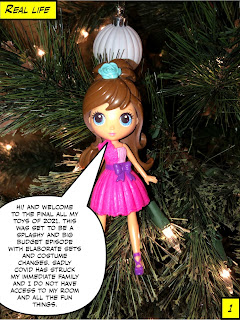 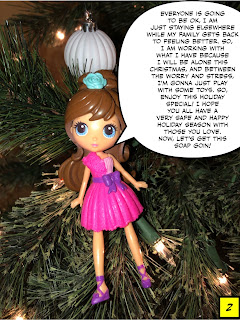 Click for all the Dorkette goodness!
Posted by Michael Lynn P. at 2:26 PM No comments:

It's the holidays. The end of the year. My goodness what a year. But it's Christmas! I'm ready to do my regular traditions! Cheesy holiday romance movies. All the decorating and parties. I'm getting ready for one of my favorite things, going into the fancy neighborhoods to look at all the lights with Billy. We've saved the world and sometimes the universe many times, but looking at those well manicured lawns with intricate and flashy light designs, it's sometimes the most magical thing to see. I can't help but wonder what is going on with everyone else in Toy Valley as we approach all the holiday festivities. I'm hoping for some peace and calm. I think we all could use that.

Crap, Billy is here and I haven't even laced up my boots! Ok, I'll talk more later!

Click for all the Dorkette goodness!
Posted by Michael Lynn P. at 10:09 PM No comments:

The time has come. Sarah, aka Quick Charge, and I are going to ask Bruce Wayne for his financial backing of the shelter and community center for trans women and men that Sarah and her friend Maya has originally dreamed about so many years ago. In my heart I know Bruce will do the right thing, but we're asking for a lot of money. He might say no. But he can't. This is so important, Toy Valley needs this. Sure we've all been super heroes at one point or another, saving the world and sometimes the universe, and while we won't be wearing costumes, we will still be providing a huge way to help and support a vulnerable community.

Side note, I got a letter from Ed. Yeah. He's still in Switzerland and says he is healing nicely. And that he might stay there for awhile longer after they give him the go ahead that all is better. It's hard to believe that it's almost been a year since I have seen him.

Oh! Super side note! I think Nancy Robbins is going to be heading to jail for what she did to my friends from Swans Crossing. I feel for Nancy, no one plans on becoming a conehead in some freak accident in a high school science lab, but come on. She took that whole love of scary movies too far.

Anyways, I gotta go, we're at Wayne Manor. It's showtime!

Click for all the Dorkette goodness!
Posted by Michael Lynn P. at 12:53 PM No comments:

Previously on All My Toys:

Nancy Robbins has been on trial for stalking her old friends from Swans Crossing. She also pushed Sydney Rutledge over a balcony at the haunted Walker Estate. Unable to wake from her coma in Switzerland, doctors flew to the states to inform Sydney's family and her fiancé Garrett Booth that she had passed away. Now the trial is heating up as Nancy faces new charges: murder! What wild things will she say next to get out of this mess?

Also, Strawberry Shortcake and Irma have become full on witches with mystical powers. One of those powers involved teleporting Custard, Shortcake's pet cat to another dimension! Can they magically bring the cat back?

Finally, Finn and Oola were being guided back to Tatooine so that Finn could finally reunite with his girlfriend Rose and their newborn and Oola and her family so that they may know how her life has unfolded following the events of Jabba's palace. Let's check on them now...

Click for all the Dorkette goodness!
Posted by Michael Lynn P. at 1:38 PM No comments:

Email ThisBlogThis!Share to TwitterShare to FacebookShare to Pinterest
Labels: All My Toys
Older Posts Home
Subscribe to: Posts (Atom)