Be Still My Puffy Heart

This is my favorite time of year. (I say that at least seven times throughout a given year.) Just click below and embrace my girly ways.


I love Valentine's Day. I've never apologized for that cheesy love either. I've certainly celebrated many in various emotional and physical states. Some were good. Some were bad. Some were just down right terrifying. One of my favorite Valentine's was when I bought myself a shiny new outfit, took myself out to dinner, and then went dancing at a night club that was playing 80's music. I was around 20. It was fabulous. The popular notion that my womanly ways have yearnings for romance, flowers, and chocolate is very misguided. Flowers die and start to stink. Chocolate will eventually lead to the sugars. I don't require much romance because that's not what Valentine's Day is truly about. I know how that must sound. Hallmark has been telling us for years that V-Day is the day of love and fancy dinners topped off with a saucy romp in a motel room or a roll in the hay as Jason Vorhees looks on with silent murderous rage.

But no! Like I have said for years, Valentine's Day is all about bathing everything in reds and pinks with hearts everywhere and no one can look at you like you are a deranged grown woman with the mentality of a five year old. 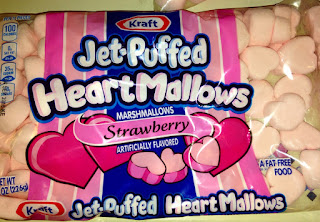 For example, this bag makes me so freakin happy. Much like the Monster Cereals that come out for Halloween, I too love a good heart themed product that should be around all year long. This bag of Heartmallows does not make me yearn for romance or love, it makes me smile because it embraces all shades of pink while also tasting delicious. Other times of the year strawberry marshmallow bags look boring. Around February they look magical. It's a simple fact. I want this as wallpaper. Or printed on a poster so I can hang it over my bed. I'm serious. I love stuff like this. I used to carry an empty bottle of Head and Shoulders shampoo everywhere with me when I was a child because I loved that pink and purple wave. It doesn't take much to make me happy. I'm a very simple woman.

This year I have not bought as much V-Day candy like I normally do. I'm actually boycotting some candy right now. Sweetarts got rid of their orange flavored tart and have now given us a new yellow one. I don't like artificial yellow. It just tastes tacky. Also, the Sweetart gummy hearts seem to be under a new formula because they taste different too.

All I've really purchased were some cherry flavored M&M's, which if you haven't tried yet you really should. You haven't lived until you've popped a cherry M&M in your mouth.

Of course no talk of V-Day goodness would be complete without an in depth discussion of the non-candy Valentine themed products for sale. Normally I buy Valentine card sets and a fun toy or two. All that has seriously been lacking this year. Which isn't bad, I'm trying to do this new thing where I don't collect everything. I'm sort of doing a decent job of that. I was at least able to hunt down this lovely gem: 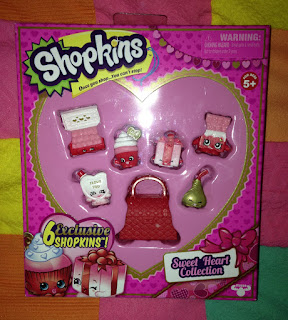 I am a rabid fan of Shopkins. There is something so adorable about this toy line. It almost feels like something that would have been made when I was a kid. The line just calls to me. So does this special Sweet Heart Collection. Go ahead, take in all those fun red and pink pieces of perfection. It's the best.

In all actuality I hope everyone is doing well. I know some people either enjoy, loathe, or are indifferent about Valentine's Day, but I still hold the torch for it. I remember being in the first grade and this boy in my class (his name was Garrett) had ALF Valentine cards for everyone. He was cute. All the girls wanted to sit by him and they were all looking forward to a Valentine card from him. I was not too hopeful of that because I was a pale wispy thing battling health issues. I was doing good to just be at school after extended stays in the hospital.

Anyways, Garrett passed out the cards and I got an ALF card with Rhonda on it. Rhonda is of course ALF's smokin' hot girlfriend. I can't remember the exact line of the card, but it essentially said something like, "You're one hot Valentine" or something. Either way none of the other girls got that card, but for some reason Garrett gave it to me. I couldn't believe it. Some of my peers were beyond peeved. How could Garrett do that? Why did he give that to Michael? Why were we even worried about this stuff in the first grade? It didn't matter. In that moment I didn't feel sick or invisible, I felt special. That's really it. I love Valentine's Day.

I hope you guys are all doing well. I'll be back with more soon. I've got a new All My Toys coming up, if I can ever get these darn Barbie dolls to cooperate.

One last thing, I was listening to this awesome Debbie Harry song while writing this. Love this one so much. Thought some of you might enjoy it, it's a fun one.