Toy Chest is back! It just feels like yesterday since we dished on Shimmers. Before we do any toy talk, let me just say, my foot is better. I had a piece of glass or plastic in my foot that finally came out in what can only be described as a scene out of a horror movie. I actually think it was a piece of plastic, which is only appropriate given my affinity for anything toy related.

Anyways, today we are going to be bringing it back to 1988 with Tyco's Dino-Riders! Back in the day I only liked learning about two things in school. Planets and dinosaurs. Anything else was a total bore and hurt my brain cells. (I mean fractions? Really?) So when Dino-Riders came out I thought it was a cool show. That Tyco also released some of the female characters made it even cooler. The basic premise of Dino-Riders was that a group of humans and humanoids traveled back in time to the age of the dinosaur. The good guys wanted to chill with the dinosaurs while the baddies wanted to control them. Either way the poor dinosaurs ended up becoming every one's ride as battles between good and evil raged on until the Ice Age i.e. the toy's cancellation in 1990.

The toyline consisted of various dinosaur play sets that ranged from small sets to rather large ones. There were also 2 pack action figures of the characters. We will be looking at the two pack with Evil Rulon Skwirm and Heroic Dino-Rider Serena! 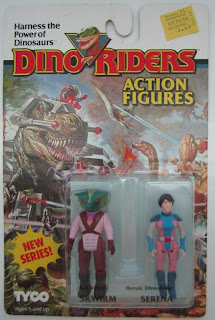 The action figure two packs came with a hero and a villain. Each figure was a few inches tall with limited articulation (shoulders, hips, knees, and neck.) The two packs only came with figures, there were no accessories. The card was also decorated with some cool Dino-Riders art. I always thought the artwork for these toys was top notch and really explained what the show was about. 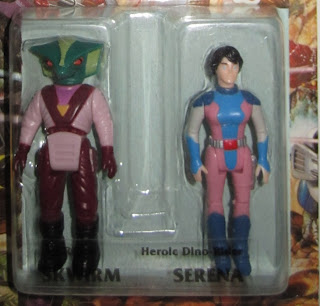 A closer look shows off some colors and how much these figures resembled the old M.A.S.K. figures. These figures were also available in other sets with dinosaurs. However for those who only wanted a certain figure, these two packs were very helpful. Even if certain packs were hard to find.

Skwirm was an Evil Rulon. I am not sure what the story was on Skwirm, but there were all kinds of various Rulons. There were snake headed Rulons, like Skwirm, and other various Rulons with insect heads and even a shark group. They were cool and inventive as far as villains go. 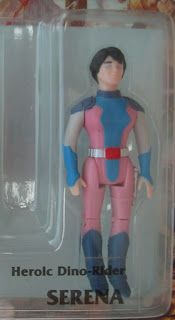 Serena was one of the very few female characters from Dino-Riders. She was a healer and wore pink. She was also incredibly rare. I remember searching high and low for this two pack in stores. I so wanted her pink jump suit. I think in theory jump suits are a great idea, but then you realize that there is no extra flowy fabric to fall back on. Anyways Serena was a fun character even if Tyco had to go and make her so damn rare. (One of these days I'm going to post a rant on female figures always being so short packed.) Anyway, Serena could also be purchased with the giant Brontosaurus set from the second series of toys. 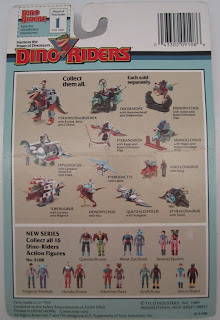 The back of the card featured a great deal of information. A majority of the Dino-Riders sets were at the top while the figure two packs were at the bottom. 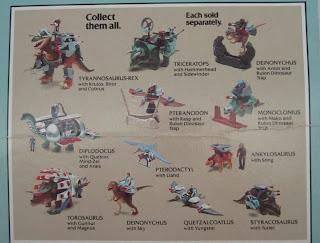 Now I'm not about to type out all these long and complicated Dino names, but wasn't the line up impressive? There were so many different sets at varying price points to purchase. I secretly always wanted the Diplodocus set because that looked like a cool contraption on the dinosaur. It just seemed like such a cool idea to merge a play set on top of a dinosaur. Of course all those expectations would be raised with the Brontosaurus set. That thing was huge!

This section of the figure packs really detailed the different characters on Dino-Riders. There were clearly some repaints, but Serena was not the only female character. There was also Ursus. I also liked Dedeye, the hammerhead shark Rulon character. As much as I adore mermaids, I also think sharks are super cool. Anyways these figures were a lot of fun. For those collecting the line, good luck. Most anything from this line is going to cost a pretty penny on sites like ebay and the like. Loose items will be easier to come by of course. I am also surprised that Dino-Riders has not had a come back. In a climate where everything has been given a second and even third chance I just find it odd that Dino-Riders has been MIA. The toyline lasted for three series and the cartoon only lasted for one. (That sounds like fuzzy math.) So maybe the world isn't really ready for a comeback... What do you think?

That is about it for Toy Chest Tuesday folks! Keep it here as I bring forth all the dorky awesomeness that I possibly can! I'm talking a cool new feature! I'm talking some shocking news in the world of toys! I'm talking one badass She-Ra Saturday! This and much more will be rolling out in the coming weeks!
Posted by Michael Lynn P. at 9:38 PM