I'm mixing things up. I had planned on doing a really fun new feature celebrating the badassness of super heroines, but I am still working on some pictures. So instead I am going to go ahead and post an all new Clip 'n Save Reader File! I love doing these. I really just enjoy getting to know other collectors and also taking some sneak peeks at other people's collections, and since we have all done our MOTUC shopping on Gilt, let's relax and read up on a fellow collector!


1. Name
Nathan (Nate)
2. How long have you been collecting?
Technically, my whole life. Even as a kid I thought of my toys as collections, and I tried really hard to get all of the toys in the lines that I played with. Officially, the urge hit me around 1993. I was fifteen, and I had a real interest in nerdy pop culture things especially action figures. I figured I was too old to play with toys, so I thought the next best thing might be to collect them. I started MOC. A few years later the hobby exploded and had it's sort of mainstream "day in the sun", so by that point I was really hooked.
3. What do you collect?
Let's go from oldest to newest lines that I actively collect. I dabble with loose/complete vintage Masters of the Universe. They're fairly cheap and easy to find. I have a complete set of Kenner's Super Powers Collection. I have a complete set of Kenner's The Adventures of Indiana Jones. Anything Indy I actively pursue all the way up to this newest 2008 Hasbro stuff. I'm almost complete with that. I have a fairly extensive MOC collection of Batman: The Animated Series ranging from 1992 to about 1998. I pick up the 200X He-Man stuff when I can. My biggest collection by far consists of Mattel's DC 6-inch figures, starting with DC Superheroes and continuing through DC Universe Classics, and then recently with the subscription Signature Series. I've also recently jumped into Masters of the Universe Classics, and I'm really enjoying those. Also I'm a subscription holder for the Mattel Watchmen line.
4. Any Toy Regrets? (as in something you regret missing out on, or something you bought and didn't really like. It is up to you on how you would like to answer it)
I don't have many. The biggest is that I didn't keep up with all the stuff I had as a kid. I had near complete collections of tons and tons of lines and I went through this weird couple of years where I either got rid of most of it or I destroyed it. Specifically there are a few times as a child I remember passing things up that I should have gotten. One instance was Mattel's Clash of the Titans Kraken on clearance, another was passing on a Droids Boba Fett. Hindsight is 20/20, they say. My only recent regret is that I didn't get in on the MotUC subscription when it was first offered, as it has been quite expensive playing catch up.
5. Favorite toy property (vintage or new) and why?
For my money it has to be the DC Super Heroes. First of all, they just translate really well into toys. Second, the property has been handled really well throughout history (we'll forget about the Toy Biz debacle of 89-90, although I have a few of them as well). If some of you who read Diary of a Dorkette are unfamiliar with Kenner's Super Powers I mentioned earlier by all means check them out. Coming out in 1984, they really are amazing. They are super detailed and they all have incredible action features.
6. If you collect, where do you normally shop for your addiction?
I still check brick and mortar shops from time to time, but I never expect to find much. All the lines I collect that are currently being produced are using the online subscription model, so that pretty much means online for me.
7. Any upcoming products that get you super psyched?
The new Watchman Club Black Freighter subscription is something I'm very excited about. That book sort of changed the way I looked at comics...and in some other ways life in general.
8. Hollywood is finally making a female centered comic/sci-fi/super hero movie, quick, who do you hope it is?
Wonder Woman hands down. She's strong, smart, sexy, and one of the best (if not THE best) hand to hand fighters in the DC Universe. I watched the Lynda Carter show back in the day and fell in love, haha. Also, she's a woman, not a girl. She's an Amazon, which means she's not one of these skinny little Michael Turner looking waifs.
9. Which toyline/cartoon would you like to see get a comeback?
Most of the ones from my childhood have come back, so this is a tough question. For toyline I'd say M.A.S.K. I was a huge Mask fan. For cartoon I'd say Thundarr the Barbarian. I love that Jack kirby designed it.
10. Biggest thing that bugs you about collecting?
Probably just not being able to find what I want. One of the best things about collecting is the thrill of the hunt. In this day and age, with everyone plugged in, it just doesn't happen. Also, scalpers, but I know that is just part of it...a necessary evil if you will.
11. Do you have a website and/or are part of a message board that you'd like to share?
I'd like to give a big shout out to my buddies over at Kennersuperpowers.com. Mike Mensinger runs an awesome site over there devoted to the Super Powers Collection. I encourage everyone to drop by the forums and say hi. My handle over there is SuperPowerNate.
12. Picture time! 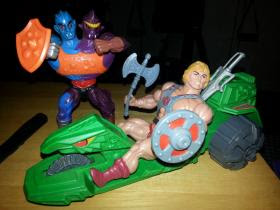 "Two-Bad and He-Man from the vintage Masters line." 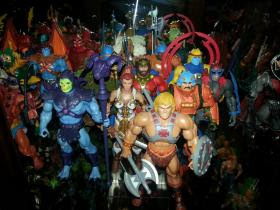 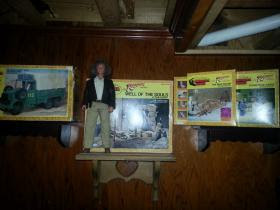 "From Kenner's 1982 Adventures of Indiana Jones line - left to right - the troop transport, 12-inch Indy, the Well of the Souls Action Playset, the Map Room Adventure Set, and the Streets of Cairo Adventure Set." 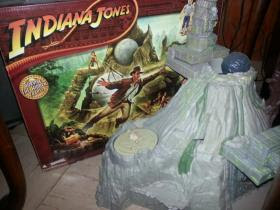 "The Temple of Akator from Hasbro's 2008 Indiana Jones line." 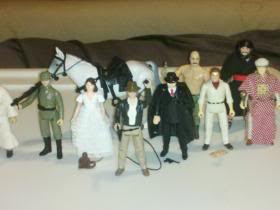 "The complete set of series 1 and series 2 figures from Kenner's Indy line." 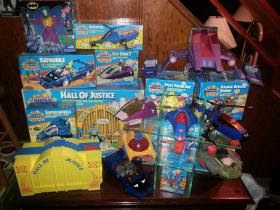 "Complete set of Super Powers vehicles and the playset." 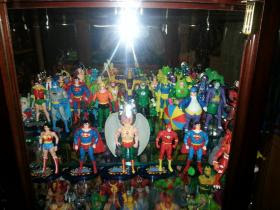 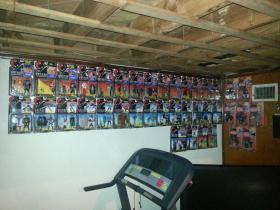 "Complete MOC set of basic Batman the Animated Series figures, including Mask of the Phantasm. Excuse the ceiling, the basement isn't finished." 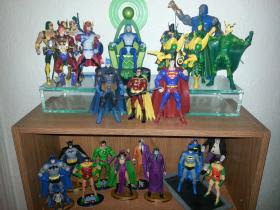 "Some of my favorite DC figures. The scene at the top are all of the figures made from Jack Kirby's Fourth World saga (and Cyclotron). Then Bats, Robin, and Supes. On the shelf are some Golden Age versions of some of my favorite characters." 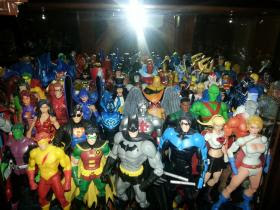 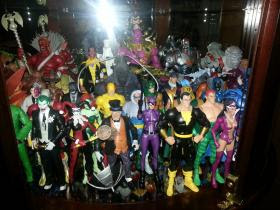 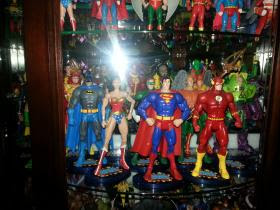 "The Super Friends!"
So that is about it for the Clip 'n Save Reader File! Wow! So first off you have a very very impressive collection. I love the Indiana Jones line. The vintage one was nice, but I was obsessed with the one that came out recently, both the Hasbro and Lego lines. And you are such a big DC fan! My goodness that is a lot of DC, especially the Super Powers stuff. I knew somewhat about Super Powers, but I didn't know about all of those play sets and vehicles. Thanks for mentioning the link to the KennerSuperPowers site! I will have to check that out. I also hope we get that Wonder Woman movie one day. (Your MOTUC collection is great btw!) You will have to let me know what the Watchmen toys are like from Mattel. I did not sign up for that subscription. I also hope M.A.S.K. gets a comeback. I would love for an all new Vanessa Warfield to come back to shelves. Anyways, I really loved reading your answers to the questionnaire!
Thank you for being a part of this Nate! It was fun learning about how long you have been collecting and my goodness you have a very fun and cool collection!
If anyone else would like to be featured with a Clip 'n Save File, please feel free to email at missmermista@gmail.com. I am always happy to feature other collectors! So enjoy everything and don't go anywhere! She-Ra Saturday is coming up and it is going to be awesome!
﻿
﻿
Posted by Michael Lynn P. at 7:54 PM