Check up on what is new and what to be expecting soon!


As of this writing I am feeling rather sick. I've gone through a bag of Cry Baby bubble gum in the course of a few days and I feel like the sour gum has started to eat away at my stomach lining. It's ok though because I have been on an insane candy binge lately. I blame it on the shortage of Ecto Cooler. Actually it might just be that everything is cyclical and my taste buds have just been craving candy.

Speaking of cyclical, I have been going through a shedding phase with my hair like I'm a damn snake. Snakes don't have hair but it was more in connection to how they shed skin. It makes sense in my head. Either way I knew it was time to cut my hair. I wanted a Storm coif, like her hair in the late nineties when it was shorter in the back and then got longer in the front.

This is how bad things happen. I didn't go to my usual lady and instead tried someone new. It was a disaster. I was told that I was losing too much hair with the possible reason being, "You must be what? 45 or 46? It's probably just menopause." While I am perfectly fine being 46 one day, that day is not today as I am only 34. I don't want to be in menopause as I like to think I am still juicy and fly. (I am well aware that you can be fly and juicy with a menopausal moment, but the sands through the hour glass are piling up with all the dry heat waves and what not. Or so I've heard.)

The hair lady also proceeded to tell me that the only reason she thought I was 45 or 46 was because, "I don't see a line on your face but you just look older. Maybe it's just a mature way about you." I wanted to die. She also pointed out every single gray hair on my head as she cut and snipped. For the record there were only three but that is three too many.

As much as I value being a modern woman who doesn't give a shit about the trappings society puts on us, I have to admit growing older and having it rubbed in my face is not a great feeling. I can't bend down and get up quickly like I used to. There are way too many moving jiggly parts. The idea of being ravaged by a man is both promising and terrifying at the same time. I don't know what is happening to me but I know damn well the lady at the department store hair salon does not need to be informing me about it.

I've also been incredibly busy. I wanted to post so much more this month but I just have not gotten the chance to. I am in the middle of writing a follow up to me conversations with Justine Dantzer. This second part is going to be a big deal because I plan on sharing her story about how she created the Princess of Power toy line. There will be pictures and stories galore. I am so thrilled for this.

I have also been gathering photo ideas for the next edition of All My Toys. It's a big story. It might be one of the biggest toy story undertakings I have done yet. Of course this means there will be a delay. It's what that always means.

The other thing I have been busy with involves a short story I am trying to submit in a writing competition. It's something I have done before but this time I have gone completely out of my comfort zone. I am not expecting to win at all, but what I am expecting to do is push myself to write a lovely story that contains characters and situations I have created. I feel like I pretty much suck at it. I want to push myself though.

Pushing myself is very important. Lately I feel like I am just not able to do well at anything. I don't know if it is a fear-thing or a confidence-thing. I just don't know. Being told I'm in menopause does not really help either. Sometimes I wish life was as simple as crawling into a cave and staying there forever with a bag of candy and some comics. Ok, and some toys too. I always have this smile on my face like I just got promoted to being a Care Bear, when in all reality I am anxious about every thing in my life.

I'm going to be ok though. I've got candy. I've also been obsessed with toys coming out this summer. Shopkins is a favorite of mine and their foray into dolls has been bliss. Their latest wave of dolls, called Shoppies, has been their most unique yet. 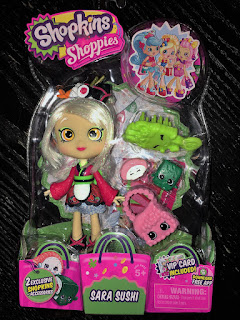 Her name is Sara Sushi. This is the first time I've ever been this excited to get some sushi. They have another one called Rainbow Kate but every one I have seen so far has had horrible eyes. They're really cute though. I just love the idea of having a doll with a sushi theme. It makes no sense. I would never wear sushi on my head on account of the eventual smell, but damn it if it isn't fun for a toy line.

Also, be sure to check out a really great article over at Nerd Society! My friend Paladin got to interview fellow gamer Glitzy and her zest for gaming is a lot of fun, to say nothing of her fun cosplay. So check it out right here.

That's about it for now. Thanks for continuing to stop by. I know I do not post as much as I'd like, but being able to check in and catch up is always fun. So stick around, there is plenty of new stuff coming up! I am looking forward to it. Hope all is well guys and dolls!
Posted by Michael Lynn P. at 1:38 AM