I'll Tell You a Toy Story

But it won't involve toy Miss M. Not yet at least! I am getting very close to starting those toy stories up again. However I wanted to share another juicy toy story from my youth. So click the link and read on fellow toy fans!

Most of you know about my various stories about toy collecting. There was the saga of finding my Glimmer She-Ra figure. My various phone calls to the Toy Biz hotline asking when certain X-Men characters would be made into figure form. Or even finding my old Fear Street books at a used book store that I had parted with when I was a precocious pre-teen. I have a great deal of memories involving the art of collecting. Sometimes though the art of collecting likes to play tricks and games with my heart.

So let's travel back to 1998. That was an interesting year. I was young. Around 16. Sweet 16. Only I wasn't very sweet. I was grody skinny with platinum blonde hair and a wardrobe that mirrored Gwen Stefani way too much. I was also boy crazy but the only thing that could douse that flame was my toy crazy.

That year some really fun movies came out. I could rattle off a list or you could just Google great movies from 1998 and relive a pretty fun list. Either way The Avengers came out that year. No, I do not mean the Avengers from Marvel, but the Avengers from across the pond. 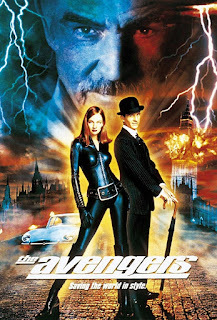 The tale of two British agents John Steed and Emma Peel. Based off a television series from the 60's, this new flashy movie had a dreamy Ralph Fiennes in it and a lovely Uma Thurman in catsuit with red hair.

I was obsessed. I wanted my own cat suit. I ditched the platinum hair and dyed it red and began parting it like Emma Peel. I also had a thing for obnoxious belts. 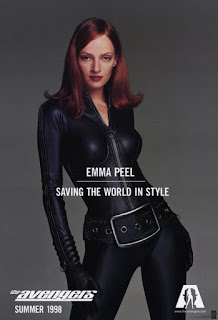 I was completely entranced by the build up to this movie. With that kind of interest and curiosity for a movie it was only a matter of time before my thoughts began to turn to toys and merchandise. At that time I just knew that The Avengers would be a smash hit and that some toy company would be releasing figures of John Steed and Emma Peel.

Since this was the days before clicking on the internet to find the latest toy news my only options for finding out news about any Avengers toy line was through either Toyfare magazine or simply cold calling toy stores inquiring if they knew of any merchandise coming in. 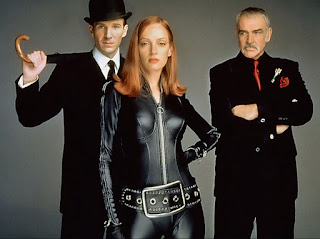 That is just what I did. The closer it got to the premiere date of The Avengers in theaters, I would call Toysrus and ask if they had received any toys from the new Avengers movie. The replies I would hear would be to the effect of, "There is an Avengers movie?" Or, "We don't know what we get on the trucks, just check back every week." I was losing hope.

Finally a week after the movie was out I was beginning to really lose my mind. Surely there would be toys released for this movie, right? I gave one last call to Toysrus and asked if they had any Avengers toys. The employee on the phone said, "Yes, we just got some new Avengers toys in stock."

I was filled with so many questions. What did they look like? Were they figures? Or more doll like? Did they capture Uma's likeness as Emma Peel? She would hopefully turn out better than that sad Poison Ivy doll from Batman and Robin. (To be very honest I loved the doll and figures from that ill fated Batman romp.) 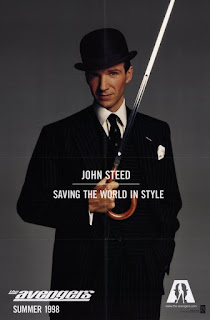 As fast as I could I high tailed it to Toysrus ready to find my Avengers toys. Thoughts of a dreamy Ralph Fiennes figure floated in my head making me feel giddy. What truly tipped my nerves to a near orgasmic point was the curiosity of what the toy packaging would look like. Upon entering the Toysrus I rushed towards the action figure aisle in a frenzy. I had to! I was not going to be fighting other like minded nerds for Avengers toys. I just knew toy nirvana was at my finger tips. Life was but a piece of cherry vanilla cake.

It was not that easy. Toy collecting never is. I looked high and low hoping to come across the movie toy line. I found nothing. My head swam in a sea of confusion. I grabbed the nearest Toysrus employee and asked, "I called earlier about the new Avengers toys you got in. Could you please tell me where they are at? The movie just came out a week ago."

The employee looked at me as if I was crazy, "I did not know they made a movie. But here, I will show you the Avengers toys." I followed the employee trying to wrap my head around how I missed these items.

When I was taken to the Avengers toys something did not make sense. "Here miss, the Avengers toys. They are mixed in with the other super hero figures so it is easy to miss them." I was staring at boxes of Toybiz's Famous Covers line featuring Marvel super heroes. I was lost. Where was Emma Peel? Or John Steed? Or even Sean Connery. I would have settled for Sean. 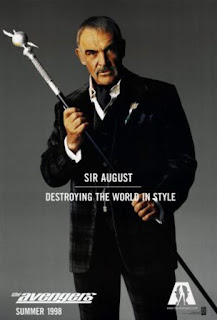 During my phone call the employee had thought I was referring to Marvel's the Avengers and not the spy movie The Avengers. It was a simple mistake but one that cost me a great deal. My hopes and dreams were dashed, taken from me. There were no action figures to the 1998 Avengers movie. I think I was the only person on Earth that even wanted a toy line. I left with nothing feeling the weight of the world crash upon my feelings. My collective heart was crushed. I didn't even end up seeing the movie in theaters. I just didn't care. What was the point?

The moral of this sad story is that back in the olden days we did not have the information to know what was out there. It was truly a blind experience walking into a toy store. Of course toy magazines would become handy as would the internet but for a sweet 16 year old mess like myself I had no idea what to do. I wish there had been a toy line made to The Avengers. I wish I had had other dorky toy collecting friends back then. They would have helped me in my grief. At least I had my hair styled for awhile like Uma's Emma. There is a silver lining in all things. Are there any movie toy lines that you wish had been made? Let me know!

Now that we are approaching the summer time, I will be having some time off from work. I won't be as busy which can only mean one thing! (Well... a few things maybe.) Toy stories will be returning! Find out soon what toy Miss M has been up to all these months. It has been a lot! I hope you are all doing well! Be back in a flash.
Posted by Michael Lynn P. at 2:18 AM